Ecstasy: In and About Altered States

A review of the 2005 LA MOCA exhibition. 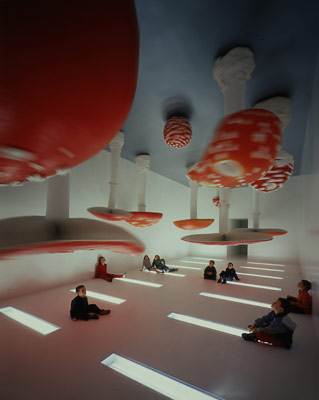 There is a moment in Talo/The House, 2002, a video installation by the Finnish artist Eija-Liisa Ahtila currently on display at the Los Angeles Museum of Contemporary Art, where the furtive glimpse of a dog triggers an altogether different kind of vision: Outside a new order arose, one that is present everywhere. Everything is now simultaneous, here, being. The monologue is derived from the artists interviews with schizophrenics, but we have all known moments like this, when we harbor intimations of a deeper design, of a dream logic beneath the surface of things, of an incandescence in the mind. These intensities — perhaps nothing more than shivers of the brain — are the grace notes of consciousness, known empirically before they are known conceptually. But even the most direct experience of trance or intoxication is refracted through cultural artifacts, through storybooks or pills or paintings. Despite their intimate character, in other words, we know altered states partly through mediated ones.

At its best, Ecstasy: In and About Altered States (curated by Paul Schimmel) foregrounds this tension between experience and mediation, a tension carried in the very resonance of the word ecstasy. The Neoplatonist Plotinus used the term ecstasis to describe mystic transcendence, the flight of the alone to the Alone; later Bernini famously incarnated a more devotional sense of transport in his trembling St. Theresa, which few of us can witness without imagining more carnal forces than God parting the saints lips. This is what happens to ecstasy, for us — it moves from God to orgasm. And now that Ecstasy names one of the most popular recreational drugs on the planet, a phenethylamine capable of delivering its own beatific intensities, we can see how far we have come. Rather than Plotinuss flight from matter, ecstasy has become a controlled substance.

The wall text that introduces the MOCA show nowhere mentions drugs, although terms such as altered, intoxicating, hallucinatory, and the more classic bacchanalia let us know where we stand. On the one hand, this ambivalence is key: the question of how the experience of psychoactive substances like MDMA or LSD relates to other unusual mindstates is a vexed issue, one that echoes crucial contemporary concerns about simulation and the manufacture of subjectivity. But by loosely jumbling drugs with a wide variety of altered states — hypnosis, sleep, madness, perceptual illusion — the MOCA show seems muddled from the onset.

Certainly there are drugs throughout the show, or rather, drugs. Psychoactive mushrooms, either the Santa Claus caps of fly agaric or the more commonly consumed Psilocybe cubensis, are scattered throughout the museum — a scattering that becomes, in Roxy Paines 1997 Psilocybe Cubensis Field, at once exuberant and creepy. Over 2000 impeccably hand-painted polymer casts run riot across the floor, uniting Paines longstanding concerns with replication the copy and the interpenetration of artifice and the organic. All fungi are essentially replicants, after all, sharing the DNA of a collective organism, and their sculptural multiplication across the gallery floor generates an uncanny quality common to both organic and technological modes of replication — an almost animistic sense of iteration that also enchants psychedelic perception, which can make the most innocuous floorboards seethe and sprout to multitudinous life.

Of course, a collection of actual Psilocybe cubensis in a gallery would constitute felony possession, making Paines simulacra more safe than they are subversive. You will not get high from these objects; they are all surface; they only remind. Ditto for Tom Friedmans 1997 Untitled, a pile of pills whose obsessive and accurate fabrication from Play-Doh twists the notch up on Paines piece by skipping nature and just simulating the synthetic. Friedmans empty fetishes, though, are juxtaposed with his 19921997 piece 1,000 Hours of Staring, a square piece of white paper whose status as an art object rests with the artists claim that he stared at the thing off and on for a thousand hours. Despite the surface cleverness, 1,000 Hours is one of the rare pieces in the MOCA show with an inside. In other words, in the midst of knowing mediation, Friedman provides a trace of raw experience: a Duchampian gag that actually imbues the object with a state of mind — even if that mind is just sitting in a room, bored out of its skull.

Perhaps the MOCA shows most perceptive framing of this Mobius strip of mind and object lies in the three-tiered water fountain that forms the central element of Klaus Webers proposed Public Fountain LSD Hall, 2003. The water cycling through the delicate glass structure, made of scavenged Victorian crystal, carries what a framed certificate assures us is a homeopathic trace of LSD-25. Homeopathic remedies, widely embraced in the artists home of Germany, rely on trace dosages so subtle that in the eyes of conventional science they dont even exist. Besides gesturing towards the tiny scale of the LSD molecule (with active doses measured in micrograms, LSD is one of the most potent psychoactive substances known), Webers invocation of homeopathy suggests an alchemical perception of signatures and subtle energies that skirt our conventional understanding of matter. In addition, homeopathic remedies work by introducing a trace of the offending disorder. Weber is suggesting that we are already tripping, and that we are only cured by what already ails us. And as you lean towards the fountain, you feel what he means, for the dripping water falls and plays with such plangency across the glass that you could swear somewhere a musical box is concealed. But it is only a singing crystal you hear, or your mind tuning to a singing crystal — as fit a metaphor as you need for the visionary potential of crystal solids like LSD. By switching sensory registers from vision to sound, and from sound to music, the fountain stages the sort of perceptual surprise that lies at the heart of psychedelic experience.

Naturally, you are prevented from dipping your finger into the fountain by a surrounding cage of Plexiglas, and even leaning in too closely to the singing fountain will rouse the ire of MOCAs persnickety guards. These conditions are not incidental. One of the core maxims of postwar psychedelic culture is “set and setting”: the trip is contextual, dependent on personal attitude and environment as much as the substance swimming in your brain. In a museum, the set is as varied as each person, but the issue of setting raises some sharp questions about the limitations of the institution when works of ecstasy, or transport, or visionary experience are on the line — when we are in as well as about altered states. It is one thing to follow a dark and mazy corridor into a white room where rotating fly agaric mushrooms dangle from the ceiling; it is another to enter the space with a gruff guard eyeing you down. You police the obvious impulse, which is not just to appreciate Carsten Höllers playful interrogation of perception, with its Eleusinian echoes, but to run around and take snapshots of your companions. Yes there is serious inquiry in the piece, but there is also celebration, and the impossibility of celebrating in MOCA made me long for a blank void very different from the white cubicles of the museum. It made me long for Burning Man.

It is perhaps unfair to compare a downtown museum of contemporary art with the dry alkaline lake bed in Nevada that annually provides home to a hedonistic freak festival, but the freak festival in question has also established probably the most creatively sustained counter-hegemonic site for mass public art production and consumption in the developed world. It is true, of course, that a lot of art at Burning Man is bad, and a lot that is good on the playa would be bad elsewhere. But the strongest sculptors and installation artists at the event drink deeply of Webers fountain, taking on the conundrums of altered art with fierce joy. Indeed, frequent habitués of Burning Mans Black Rock City will experience a number of flashbacks visiting the MOCA show. Erwin Redls matrix of green LEDs, Sylvie Fleurys glitzy space pod, the profane neon illuminations of assume vivid astro focuss porno disco, even Olafur Eliassons quietly sublime strobing rain — all relied on tricks and rhetoric that have, simply put, been executed with greater playfulness and formal power on the playa.

The point is not that Burning Man is better, but that the art of altered states depends, in part, on a lack of temerity before the exuberance of visionary experience. One oblique way into this breach, of course, is through the wonderworking powers of popular culture, which in todays art world frequently means Japanese popular culture. Inevitably, Ecstasy includes some of Takashi Murakamis silly mushrooms, so flavorless in comparison with the immensely popular organic fantasies of, say, manga and anime master Hayao Miyazaki. Of greater interest is a gorgeous and crafty piece of animation by Chiho Aoshima. A single seven-minute reverse tracking shot distributed across five plasma screens, City Glow, 2005, unfolds like a trip, or a myth: We fall away from a wormlike cityscape and move, at a childs height, into the transformations of nature and season and death. Crossed signals arise — fish float through the air, a bunny caws like a crow — but the goofiness is undermined by a graveyard populated by Aoshimas patented horror-show nymphets, who are themselves replaced by a no less disturbing tinkerbell heaven of fairies and rainbows. The key element is the long pullback. We are looking in the rearview mirror, at a way of seeing that lies behind us — in the long-ago of childhood, but also in the history of visual expression, in that visionary capacity now largely swallowed up by commodified technological fantasy.

And yet mqny contemporary artists produce visionary material without leaning on pop culture. Whatever its satiric undertow, Ye Olde Ruin, 200304, one of two immense Paul Noble drawings included in Ecstasy, offers an unabashedly fantastic otherworld of abstract machines, hermetic eggs, and Boschean play. But the MOCA shows most explicitly visionary art belongs to the Brooklyn artist Fred Tomaselli, who continues to refine and intensify his bold explorations of collage, visual rhythm, and pinwheel psychedelia. Like Paine and Friedman, Tomaselli draws attention to the actual things — the pills and organic materials — that mediate psychoactive experience. But as he painstakingly arranges these things, and others, into the thick resin that coats his hybrid collage-paintings, he dematerializes them as well, revealing their potential to become elements of mind and pattern, like the string figures in Harry Smith movies or the inner-eye whirligigs captured in his recent Millennium Phosphene Bloom, 2005.

Another remarkable new work, 2005s Organism, shows a man with transparent skin plunging headless into a crystal chaos of stars, spider webs and fractured mandalas. The piece seems to literally embody the difficult human transition between meat and mental ecstasy, but its full resonance only becomes clear when juxtaposed with the similarly semi-transparent bodies of Alex Grey, another Brooklyn artist and one of the most dominant painters in the largely marginalized world of contemporary psychedelic art. Though Greys work graces rave fliers and New Age calendars, he is no naïf — the declarative intensity of his strongest paintings depends in part on his sly appropriation of textbook medical imagery, whose hyperreal rhetoric paradoxically lends an air of actuality to his visionary bodies. But Grey is too much of a mystic literalist to ever make it to the walls of MOCA; transcendence, even if it is just a trick of immanence, is still taboo. Whereas Greys transformed figures confidently ascend into rainbow mind-lattices, Tomasellis organism plunges into the fractured rag-and-bone shop of the mind, providing the more assimilable message that ecstasy is rarely far from the abject.