Erik Davis
Subcultures
• 14 years ago
publish
Check it out 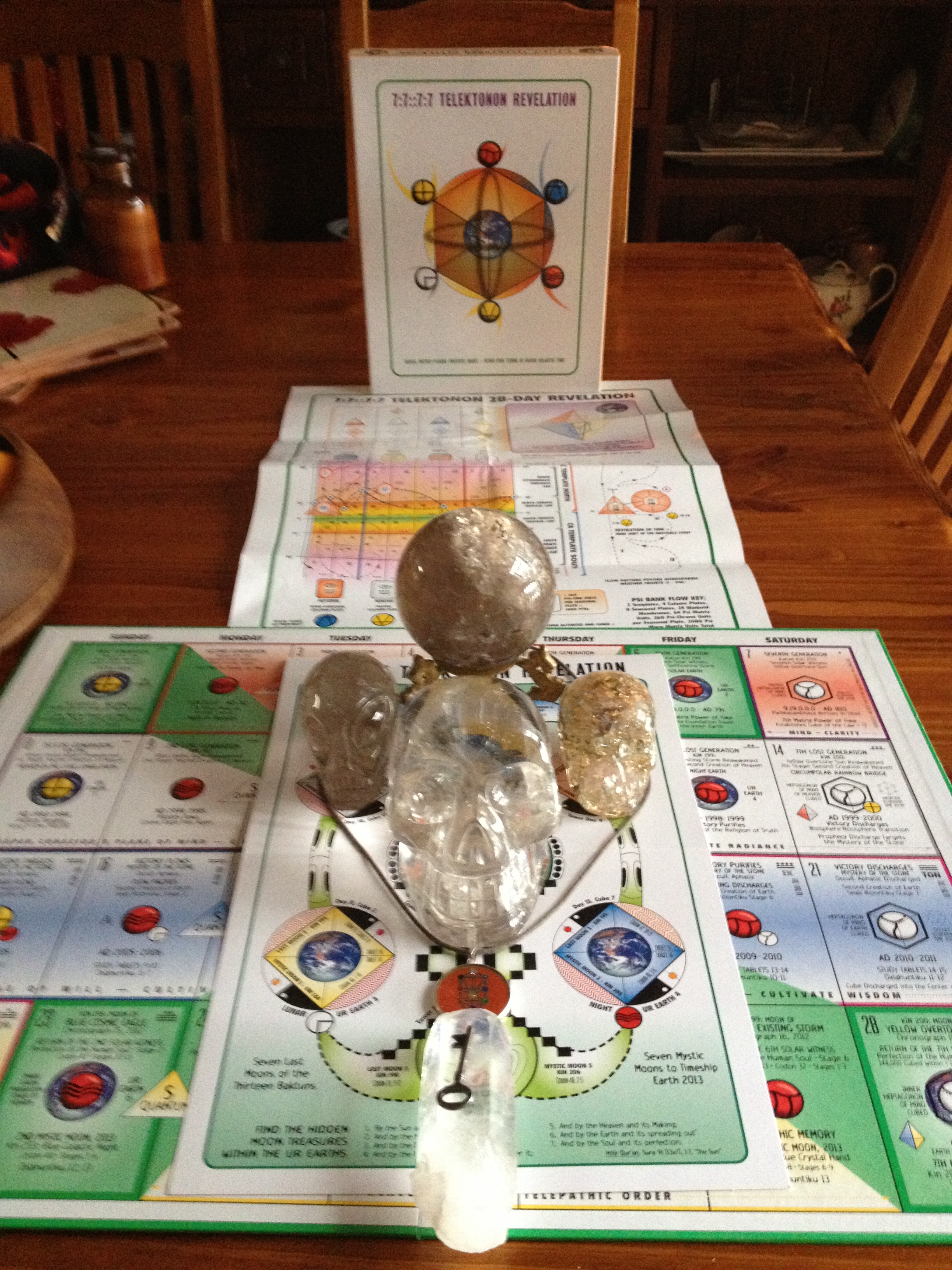 My pal Gregory PTM was recently offloading some stuff and decided to ditch his copy of Telektonon: The Game of Prophecy, a boxed Mayan-calendar board-game mind-virus that was released in 1995 by Jose Argüelles. Old school New Agers will remember Argüelles as the guy responsible for the harmonic convergence of 1987, but these days he is best known for his feathered boosterizing of the belief that the year 2012, the end of the Mayan Long Count, forebodes an epochal transformation of time and life on this planet. If you own crystals or wear dreads or spell magic with a k, you know that the 2012 meme is riding high these days (in more ways than one). Even the New York Times Magazine deigned to cover it recently, and with nary a smirk at that.

I find western culture’s predeliction for apocalyptic date-mongering a fascinating phenomenon, at least from a distance. (There is no evidence that the Mayans associated the end of the Long Count with any specific transformation or destruction of the world.) But my brain shuts down in the face of elaborate occult calculations, and I have only so much stomach for the promoters of ghost dances. Still, I love artifacts that attempt to map and embody mystic systemsthe aesthetics of apocalypse you could sayso I happily swapped copies of my last two books for Gregory PTM’s treasure.

I think its fair to say that, in terms of prophetic mania, Argüellesaka, Valum Votan, “closer of the cycle”has slipped past the point of no return. But the man also wrote The Transformative Vision

, an absolutely terrific, non-wacky text about the visionary strand in western art. And later books like Earth Ascending

Earth Ascending, with its richly superimposed full-colored diagrams of dense occult correspondences, are feasts of visionary system-building, like a New Age Paul Laffoley creating an I Ching for the multiverse. With the Telektonon and a host of other artifacts and texts, Argüelles used his creative imagination to construct a revisionist repackaging of the Mayan calendar called the Dreamspell, or Thirteen Moon Calendar. The Dreamspell, which can be used like an oracle to sound the day, combines remixed Mayan glyphs, astrology-like solar tribes, and a holistic rhythmic organization of time whose swift implementation Argüelles claims will help us navigate the onrushing galactic transition.

The system has power. I know a loose and youthful tribe of elven galactivators who live in the Sunshine Coast of British Columbia. A while back a lot of folks in the scene took to using the Thirteen Moon Calendar, less, I suspect, out of neo-hippie convictions than a spirit of visionary play. They used it like a game, in other words, a game whose adoption actually remapped their experience of quotidian reality, seeding synchronicities and drawing the tribe together within a mild collective hallucination. Adopting a rival calendar system, especially one designed to stimulate wisdom and to challenge the workaday world, can creatively subvert our hidden cognitive frameworksif for no other reason that it reveals how thoroughly the human artifact we call the Gregorian calendar structures our existential experience of time and duration.

In this light, Argüelles should probably be recognized as a prophetic progenitor of today’s rage for Alternate Reality Games. The artifact Telektonon: The Game of Prophecy, with its fold-out game-board, poster, cards, and rulebook, is cool, but it only represents a much larger game played with the rhythms of the cosmos and human culture. It even suggests that occult systems and possibly even religious cosmologies are perhaps most productively thought of as gameslike D&D for keeps.

Sadly, Gregory PTM didn’t include the bag of board pieces that comes with the game, and says he can’t find them. And until I get my paws on the yellow Pacal Votan turtle, the five oracle pyramids, and the “recharge battery crystal,” I think I’m flat out of luck. Which is not a terrible loss, really, because earlier attempts to absorb the Dreamspell didn’t last very long. I am as bored by the Gregorian calendar as you should be, but Argüelles’ divinatory language is insipid, his horror vacui palpable, and his understanding of the historical Mayans and their math as eccentric as you’d probably guess.

OK, I’m not being honest. What I really don’t like about the Dreamspell is that my personal solar tribethe White Solar Dogis so lame. (You can dial up yours here.) My friends get to be Red Resonant Skywalkers and Blue Magnetic Eagles and White Crystal Mirrors. And I get to be a solar dog, whose most important qualityin a system replete with spectral transformations and mystic powersis loyalty. I am a pretty loyal guy, and that’s cool I guess, but I’d prefer something more enchanted. My pal Delvin, one of the elf-mages of the BC scene, argues that I am actually a wolf, which is pretty cool. But I’m not buying it. If I can’t be a White Galactic Wizard, I don’t want to play.