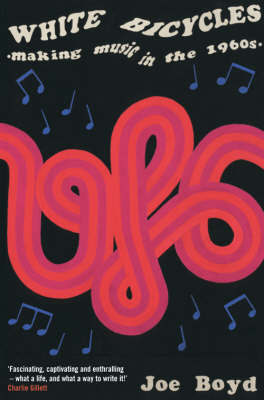 When I was a young music fan, with far more interest in the bands than the biz, Joe Boyd was the first record producer I clued into who wasn’t a big name like George Martin or Phil Spector. I knew Joe Boyd’s name because it appeared on the much-perused copies of some of my favorite records of all time: the inimitable (though they try) Nick Drake, as well as the early LPs of Fairport Convention and the Incredible String Band. Given my paganish tendencies, in self-mythology if not in ritual reality, I particularly loved the name and logo of Boyd’s Witchseason productions, though its origins in a Donovan song suggest the economic reality that always bubbles beneath the tunes: “Beatniks out to make it rich / Must be the season of the witch.” As a producer, Boyd was certain hep to this aspect of the music biz, though at the time I figured him for some longhaired standing-stones fanatic, a sort of Cornish hippie John Peel.

As I recently discovered in White Bicycles, Boyd’s memoir of the sixties music world, this talent magnet turned out to be Americana Harvard boy from the Leary/Alpert days who moved Zelig-like through some of the greatest music scenes of the decade, seemingly always in the right place at the right time. During the folk days, he helped start a crucial trend when he tracked down the blues singer Lonnie Johnson and payed the old guy to play in front of white college kids. Boyd was deep into the Cambridge coffee-house scene, and was working the boards during Dylan’s legendary Newport gig. Boyd opened UFO, London’s most important psychedelic club, where he booked Soft Machine and a young Pink Floyd, whose earliest recordings he also set to wax. Boyd met Britfolk stars like Anne Briggs and Bert Jansch back in the day, worked for the upstart Island, recorded Vashti Bunyan’s jewel-like Just a Diamond Day, and broke Nick Drake and Fairport. He even whipped together the “Duelling Banjos” session for Deliverance.

White Bicycles is a delicious read, one the most entertaining and informative books on sixties music I’ve stumbled across. Boyd’s recollections have a documentary tenacityas Boyd himself notes at the end of the book, he experienced the sixties but managed to remember it as well. He has a gift for sharp detail but knows when he’s said enough; though he covers a large track of his enviably rich life, the book is well under 300 pages and a smooth read. He is also a minor master of the crisp, character-defining anecdote, and provides memorable and sometimes tart snapshots of Sandy Denny, Anne Briggs, the Watersons, Coleman Hawkins, Mike Heron and Robin Williamson. Even more interesting are his takes on the movers and shakers that made the whole thing (or much of it) tickthe cigar-chomping promoters and bookers and especially the managers, who in the UK were often in the rough and tumble mold exemplified by Zeppelin’s Peter Grant and were as often as not responsible for the gimmicks that helped establish their charges. “New York would never have molded Hendrix’s genius into as powerful a pop persona as London did,” Boyd notes.

Boyd’s musical tastes are similarly sharphe may mock the Grateful Dead, but he really dug the Move, about whom he writes: “their music verged on psychedelia, but it was a beer-drinker’s psychedelia.” He recognized the value of the British folk tradition when most British rock and pop fans thought it all dreadfully dull. And though he does not write enough about his work in the studio, one chapter boils down to a crisp and passionate account of the old analog ways, where the shape of the room, the eccentricities of the engineer, and the savvy placement of mics designed to capture musicians playing together led to arguably better recordings:

“When I listen to records we made together in the sixties, I can still hear the air in the studio and the full dimension of the sounds the musicians created for us. I can hear the depth of Nick Drake’s breath as well as his voice, the grit in the crude strings of Robin Williamson’s gimbri and Dave Mattock’s drum technique spread out warmly in aural Technicolor across the stereo spectrumComputers theoretically let musicians and producers choose from an endless palate of varied sounds, but modern digital recordings are far more monochromatically similar to each other than were older analogue tracks.”

As a producer and business man, who more or less happily left Island to take a fat Hollywood job in the early 1970s, Boyd offers a well-balanced and sometimes cutting take on 60s idealism, political and otherwise. His breakdown on the dialectic of “authenticity” in the folk scene, and his bitter description of how white fandom ground down blues performers by the late 1960s, are exemplary and free of sentiment. In one very sharp chapter, he argues that 60s rock culture in many ways democratized the bohemia that has existed like a parasite on bourgeois capitalism since the late nineteenth century, when wild and hedonic artists titillated the masses in exchange for their escapist excesses.

For the hardcore music fan, the most valuable part of the book is Boyd’s description of working with Nick Drake. He offers insights into the singer’s melancholia and dysfunction, but also the complex joys of his music. (He does not believe that Drake committed suicide.) Body clarifies what an amazing guitarist Drake was, and ties his startlingly inventive chords to the music his mother made. For the recording of Five Leaves Left, Drake played live with the orchestra, singing and playing flawlessly at the same time. Boyd clearly takes great pleasure in Drake’s canonization, although he mocks the musician’s legion of copiers. Noting Drake’s exemplary Cambridge education, he notes that “Nick’s emulators rarely have the cultural context to grasp how remote their lyrics are from him.”

I know what the man means. After reading loud-mouthed comparisons between Drake and Alexi Murdoch in the catalog for San Francisco’s recent Noise Pop fest, I went to Murdoch’s myspace page. All I can say is that “All My Days” would work well in a Volkswagon ad. I have loved Drake’s recordings since the mid-1980s, so I may be irrational here, but it made me terribly sad to confront the superficiality of Murdoch’s music and lyrics and the hype that would drape this inoffensive coffeehouse ripoff with the mantle he is so calculated about swiping. I know that appropriation is the new black turtleneck and all, but some things are best left original.

Of course its lame to get sentimental about the sixties. One of the many great things about White Bicycles is that Boyd celebrates the amazing music (and fun) of the decade without getting wistful. So when he finally gets around to offering some cutting assessments of today’s music culture, they are earned. Boyd notes that, for all its delusions, folks in the sixties were right to believe that “When the mode of music changes, the walls of the city shake.” Boyd compares this to our age: “Today, when the mode of music changes, the walls of the city are covered in corporate ads sponsoring superficially subversive artists.” Boyd’s perspective, of course, overlooks the real revolutionary force of today’s music, which involves the undermining of copyright, the rise of digital appropriation and collage, and the transformation of the economics of distributing, producing, and discovering music. But how much this revolution actually improves music is another question entirely. On my moodier days, when only the umpeenth spin of “A Sailor’s Life” or “One of These Things First” will do, I sometimes suspect, with Boyd, that the robot pop critics of the future will be listening harder to the music of that flower-bedecked decade than our more multitudinous and self-referential one.