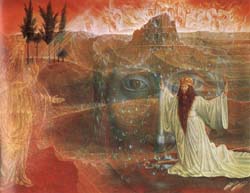 The New Eye of Visionary Art

This adaptation of my introduction to True Visions (Betty Books, 2006) first appeared in the COSM Journal of visionary art, issue 4.

The sad truth about descriptive categories like visionary art is that they are both useful and lame. Especially in the art world, the language of genres and styles often has more to do with galleries and critics than with making and enjoying art. But reflecting about categories can also be fruitful, because it shapes the context of our seeing and more importantly, the way we share and talk about our seeing. So here is my seed crystal: visionary art is art that resonates with visionary experiences, those undeniably powerful eruptions of numinous and multidimensional perception that suggest other orders of reality. Certain individuals have a predilection for visionary experiences, but these luminous glimpses bless us all at some point in our lives sometimes through intentionally induced trance states or psychoactive raptures, and sometimes through the gratuitous grace of deep dreams or the demented fun house of a quasi-schizophrenic break. But we also understand and experience visionary experience through visionary culture, those artifacts of human culture with its eyes agog.

From the perspective of the mainstream art system, however, visionary art could be seen as an attempt to broaden and extend the notion of the outsider artist those creative madmen, religious eccentrics, and poor folk considered to be outside the boundaries of conventional art history. The American Visionary Art Museum in Baltimore, for example, describes its collection as art produced by self-taught individuals, usually without formal training, whose works arise from an innate personal vision that revels foremost in the creative act itself. Thats all fine and well, and the museum is cool, but this definition is pretty lacking. By insisting that visionary artists are self-taught, the AVAM implies that visionary art is not found inside the schools, movements, or lineages that compose the dominant flows of art history. It becomes a purely idiosyncratic affair, reduced to the solitary, obsessive individual, a Simon Rodia or a Howard Finster. But many visionary artists by my definition are and have been formally educated. More importantly, many visionary artists self-consciously locate their work within a lineage of inspired image-makers that stretches back through generations of Surrealist dreamers, mystic minimalists, and medieval icon painters. Abstract art, the most exalted and intellectualized gesture of the modernist avant-garde, actually emerged from a lotus pond of theosophy, spiritualism, and occult meditation practices.

The historical lineage of visionary artists masks a deeper and more commanding claim that sets the genre apart from the marvelous idiosyncrasies of outsider art. The claim is that the visionary artist gives personal expression to a transpersonal dimension, a cosmic plane that uncovers the nature that lies beyond naturalism, and that reveals, not an individual imagination, but an imaginal world, a mundus imaginalis. Far from being outside, this world lies within. Henry Corbin, the brilliant twentieth century scholar of Sufism, coined the term mundus imaginalis to describe the ‘alam al-mithal, the visionary realm where prophetic experience is said to literally take place. It is a realm of the imagination, but a true imagination that has a claim on reality because it mediates between the sensual world and the higher abstract realms of angelic or cosmic intelligences. The mundus imaginalis is a place of encounter and transformation. Is it possible to see without being in the place where one sees? asks Corbin, throwing down the gambit of visionary experience. Theophanic visions, mental visions, ecstatic visions in a state or dream or of waking are in themselves penetrations into the world they see.

From the perspective of planetary culture, we might broaden Corbins definition to include the visionary domains that are associated with cultural traditions and holy paths throughout (and perhaps beyond) human history. The worlds visited by the shaman, the seer, the sibyl, and the prophet are all outposts of the mundus imaginalis. But this imaginal world is also produced through the labor of traditional sacred artists, who have incarnated these visions in the mythic maps, sacred geometries, and iconographies of tribes and cultures the world over. When contemporary visionary artists appropriate and sample aspects of these different cultural traditions, these different domains begin to appear, for all their differences, as a single space of the transpersonal imagination, an immense vibrating network of sacred zones and forms. Thats how the mundus imaginalis grows truly global.

Of course, the meaning and function of visionary art in the traditional cultures of the premodern world is vastly different than contemporary art practices something the more romantic proponents of todays visionary art sometimes forget. The visions captured in the premodern era are, with some exceptions (Bosch and Hildegard of Bingen come to mind), collective constructs, rendered by artists working anonymously within highly conservative cultural codes, and with little conception of art as we know it. Even in the individualistic West, artists were constrained by strict conventions and ecclesiastic expectations. Here the example of the Orthodox icon painter looms large: though the theology of the icon is one of the most powerful and sophisticated models of visionary art the world spirit has yet devised, the artists who crafted these numinous contemplative portals even geniuses like Andrei Rublevwere deeply ensconced within formal restrictions concerning color, iconography, and technique.

Todays visionary artist has been released from the strictures of tradition, and must discover her own peculiar perspective on the mundus imaginalis, often drawing inspiration and insight and frequently clichéfrom the store of traditional art. In other words, rather than rely on a specific religious or metaphysical tradition to ground their visions, todays visionary artist often looks to the cross-cultural lineage of visionary art itself. Texts like Alex Greys The Mission of Art and Laurence Caruanas vital online manifesto have helped define a visionary canon through and beyond western art history. But this canon, which ties together petroglyphs, tangkas, and Salvador Dali, is more than a genealogy, becauseand this is the crucial (and heretical) point visionary art is not a purely historical form. Visionary art insists on a transpersonal, transtemporal field of resonance, an ever-present origin of spiritual connections and hidden harmonies that shape image-making outside of mundane historical time. The visionary artists invokes her own ancestors, who only demand that she discover the way anew.

In his writings, Henry Corbin is at pains to distinguish the authentic mundus imaginalis from the muddier waters of the personal unconscious. Corbin wants to divide true imagination from mere fantasy, or, in more modern terms, the Jungian from the Freudian dimensions of dreamspace. Similarly, some old-school proponents of visionary art want to keep the pure sacred geometries free from the sometimes cloying dreck of psychedelic cliché. But one of the most powerful and confounding aspects of modern psychedelic culture is the erasure of such clear distinctions between high and low; instead we find ourselves in a Dionysian conflation and confounding of sacred and profane, where Islamic architecture and aboriginal glyphs encounter the low-brow world of comic books, skateboard stickers, concert fliers, and SciFi paperback covers.

Unlike Corbin, the contemporary visionary artist is rarely grounded in solid metaphysical claims based on tradition. Instead they are feeling their way through the dimensions, and they derive authenticity, when they need to, from their own experience. The most audacious claim of visionary art lies beyond genre or technique or school; it lies in the glittering possibility that artists can capture and communicate forms of cosmic consciousness and traces of otherworldly light that have arisen in their own streams of consciousness. Looking at the swirling mythopoetic gumbos of Luke Brown or the blobular frequencies of Vibrata Chromodoris, it is amazing to consider that these works are, in some sense, documents. In this sense, the quest to capture and reflect visionary phenomena might paradoxically be considered a new naturalism. And while it can be reductive and literalistic to spend too much time arguing about whether or not specific works are directly inspired by particularly visionary experiences, it is a vital question nonetheless, because it grounds the artifact in a living process. This biographical dimension deepens the sense of the artist as a mediator, and the artwork as a transmission rather than an object.

Ultimately, the meaning or reality of the visions perceived may be less important than the organ that perceives them. Discussing Moses famous theophany, Corbin writes that the Burning Bush is only a brushwood fire if it is merely perceived by the sensory organs. In order that Moses may perceive the Burning Bush and hear the Voice calling him an organ of trans-sensory perception is needed. In the visionary encounter, a new eye is born, a synaesthetic vector of sound and light, tuning to new frequencies, drawing patterns out of chaos and apocalyptic madness. As Delvin Solkinson and Eve Bradford wrote in a recent self-published catalog, Visionary art is evidence of a world that does not yet fully exist; a world that we are calling into being through the very act of creating and participating in the Work. This is where the vast inheritance of the visionary tradition fuses with the intense and restless self-overcoming of the avant-garde: the imaginal world is still virtual, still ahead.

At her most idealistic, the visionary artist insists on an integral connection between the work of transforming consciousness and the work of fashioning the artifact. For many practitioners and fans, this doubled work restores a healing and even shamanic dimension to art, although the shamanic journeys in question may, in the case Giger or Daniel Oullette, dive into the demonic. But slimy copulating aliens are not the nastiest demons that threaten contemporary visionary artists. The real threats lie with the temptations of kitsch, of complacent self-mythologizing, of the rote clichés and easy iconography of most fantasy illustration and New Age pop. Like a good guru, visionary artists should challenge and baffle as well as encourage and amaze. At the same time, the idea of the solitary artist as a modern shaman is also an old and rather tired story. What authenticates the visionary now may be the meanings that emerge though them, as they circulate through communities of perception. Todays visionary artist is less important than the visionary culture they seed, an expanding planetary web with art as one of its many nodes.