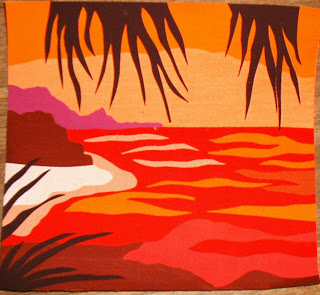 When I slapped on the forthcoming ESL disc The Alchemist Manifesto, I didn’t know much about Ocote Soul Sounds, or Adrian Quesada, or their various accomplishments, the most notable of which I suppose are the groups Antibalas and Grupo Fantasma. So I listened to the disc without preconceptions, as if it had just appeared on my doorstep, which it just, in fact, had. The slipcase has a reverberating, Carl Sagan cover, and the gatefold features a zodiac, so I knew the up were going for deep 70s.  I steeled myself for some sort of filigreed doom-psych or something, the first sound I heard was a heavily reverbed flute, followed by some groovy island percussion and echoplexed trumpet and Herbie Hancock seventh chords. This punch was made with rum.

The next half hour of the disc is delicious, propulsive, largely instrumental 70s latin druggy funk, like a full LP side of a great Soul Jazz compilation. The band is composed of human musicians, for whatever that’s worth, and they play melodies as well as grooves, slinky, slightly spooky lizard calls that slide along a bed of beats that lends Afrobeat a solid Latin tinge. Listening to this aggressively exotic and groovy music, I envisioned some luminous Spanish harlem commune where second generation mystic ruffians throw dance parties and suck nitrous in the basement usually reserved for Santeria ceremonies.

A little over halfway through this surprisingly short, under-400-minute disc, things start to go, uh, south. “Gunpowder” is deeply tainted by a parodic guitar solo that thinks its nifty, and after the track is over, the density and texture and style of the opening half hour begins to war with the more superficially tasty hipster groove moves you might expect from, say, The Thievery Corporation—perfectly pleasant, sure, but no longer drawing you into the deep, mind-manifesting, time-busting fusion that is, after all, the essence of alchemy.