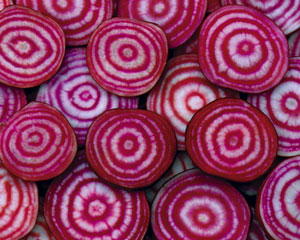 A little over a decade ago, I had a bona-fide, Grade A, no-shit “mystical” experience—or at least something that felt a hell of a lot like a mystical experience. I have never written about it before, don’t talk about it much, but I’ve been thinking about it lately and thought I’d give it a shot here, ineffability and scare quotes and all.

The deal went down, absurdly enough, during a month-long retreat at a Zen center in northern California; even more absurdly, it happened while I was washing a bunch of beets in the garden. I had come to the center to recover and reorient after the agony of finishing the final draft of Techgnosis. I was pretty wrung out. During work period one afternoon, I found myself alone in a shady corner field, rinsing a pile of freshly unearthed beets in a free-standing outside basin. I stood there, in the cool but sunny air, washing big clumps of moist, fragrant mud from the red roots. I hadn’t had any alcohol or drugs in weeks.

What happened next is tough to describe, and I think I need to lay down a bit of background first. One idea you’ll find in esoteric psychology (and elsewhere) is the notion that there is a vital difference between the content of consciousness—sensations, feelings, perceptions, thoughts, etc—and the subject that perceives or, better, witnesses these feelings and perceptions. (I discuss this idea in the weird light of Descartes and the Matrix here.) On the surface, the Witness might seem to be needlessly “dualistic”—a redeployment of the Cartesian split between mind and body that everybody is always bitching about. But its still kind of true, and meditation, to say nothing of rigorous self-observation, helps clarify the Witness by loosening identification with the thoughts, feelings, and perceptions that enmesh our being without entirely defining it.

What did this feel like? The analogy that arose most forcefully a few moments later, when I was able to reflect again, was of some sea-farer’s spyglass rapidly being drawn open, an action which extends the reach of the eye even as it, in some sense, increases the distance between the eye and the surface medium where the world inscribes its traces. My eye, my I, was now peering into my experience from Olympian climes.

It’s tough to describe what this new I felt like without leaning on mystic rhetoric, which I really don’t want to do because it sounds like bullshit, and my experience was anything but bullshit to me. One thing is for sure: there was nothing particularly human in it. It felt like a being, but it had no attributes I can really name other than awareness and perception. It felt like diamond, like hard serenity, a clear and crystalline meta-mind that was both individual and, in some ungrokkable, transpersonal way, collective. And ever so slightly amused.

There was a soft but implacably unemotional quality as well, a passionless intelligence I will take the risk of characterizing as “angelic.” I am thinking here of the angels in Wim Wender’s Wings of Desire, equanimous observers, like long-suffering but interested cosmic shrinks. I also sometimes suspect that my experience may reflect what Thelemite and other Solomonic magicians mean—if they mean anything concrete at all—when they describe the goal of ritual magic as the “knowledge and conversation of the Holy Guardian Angel.”

Even as I arrived at this adamantine peak, I had also returned downhill, attending to the situation at hand: washing  beets in a dappled field on a cool but sunny afternoon. The spacious crystalline entity my mind had become now hovered in infinite approximation to the dude I normally am, watching hands that were no longer exactly “mine” continue to rinse the roots.

At that moment I understood, with an unshakeable clarity, two things: that the causal, billiard-ball flow of the world proceeds absolutely lawfully, and that I suffer because the bright shards of witnessing angelstuff that lie at the root of my being get caught up in attempting to push and pull this procession, to cling and resist and identify.

The word lawful seemed to appear in my mind as the experience unfolded, but it may have popped up shortly thereafter. It’s a funny word. I never use it favorably, for one thing, having a typical lefty counter-cultural prejudice against the law—either religious stricture or the cops or conservative ideals of absolutism and obedience. But that is how I saw our little slice of space-time. As lawful.

Later, as I puzzled over this somewhat odd word, I recalled that one of the meanings of dharma is law. Maybe not law in the sense of the law of karma or the four noble truths or the five amazing thises or the six sobering that’s, but just the way things are. And for those brief moments, the way things are was not causing me the slightest bit of tension or pain, unlike, I could see, pretty much the rest of the time, when the double-binds of agency, choice, and desire set me at cross purposes to the flow.

In the final movement of the experience, I looked up from my hands in the basin towards a row of pine trees and eucalyptus that fringed the edge of the field. This was the universe: the wind moving slowly through the branches. I remember being startled, even at the time, that everything still moved. Despite the extraordinary otherness of my perception, time seemed to mosey along at its usual pace.

Except not so usual, because everything was light and surface and dancing, like sunlight reflecting on an inland sea, like mist in the morning, like Vegas (or the playa) at night. The wind, the leaves, the dappled light, the eucalyptus scent, it all vibrated with a consistency and dynamic togetherness I can only compare to a symphony, and like music it seemed to be fundamentally incorporeal, diaphanous, all void of substance, of that inertial stuff that gravity drags down. It was marvelous, beautiful, bittersweet, and just the way things are.

Nothing even remotely similar has happened to me in the years since, though I sometimes get a gnostic whiff of the angel hovering over my shoulder. I could try to say more about the experience, about how it changed and, mostly, did not change me, but this little tale will have to do. I’ll say this though: even if what happened to me was a neural hiccup, then I know, in the way we know the mad unions of love, that we carry something cosmic within us, that the self is a doorway to another Self, and that death just might swallow us in glory after all.