A review of Your Private Sky: R. Buckminster Fuller, The Art of Design Science,ed. By Joachim Krausse and Claude Lichtenstein 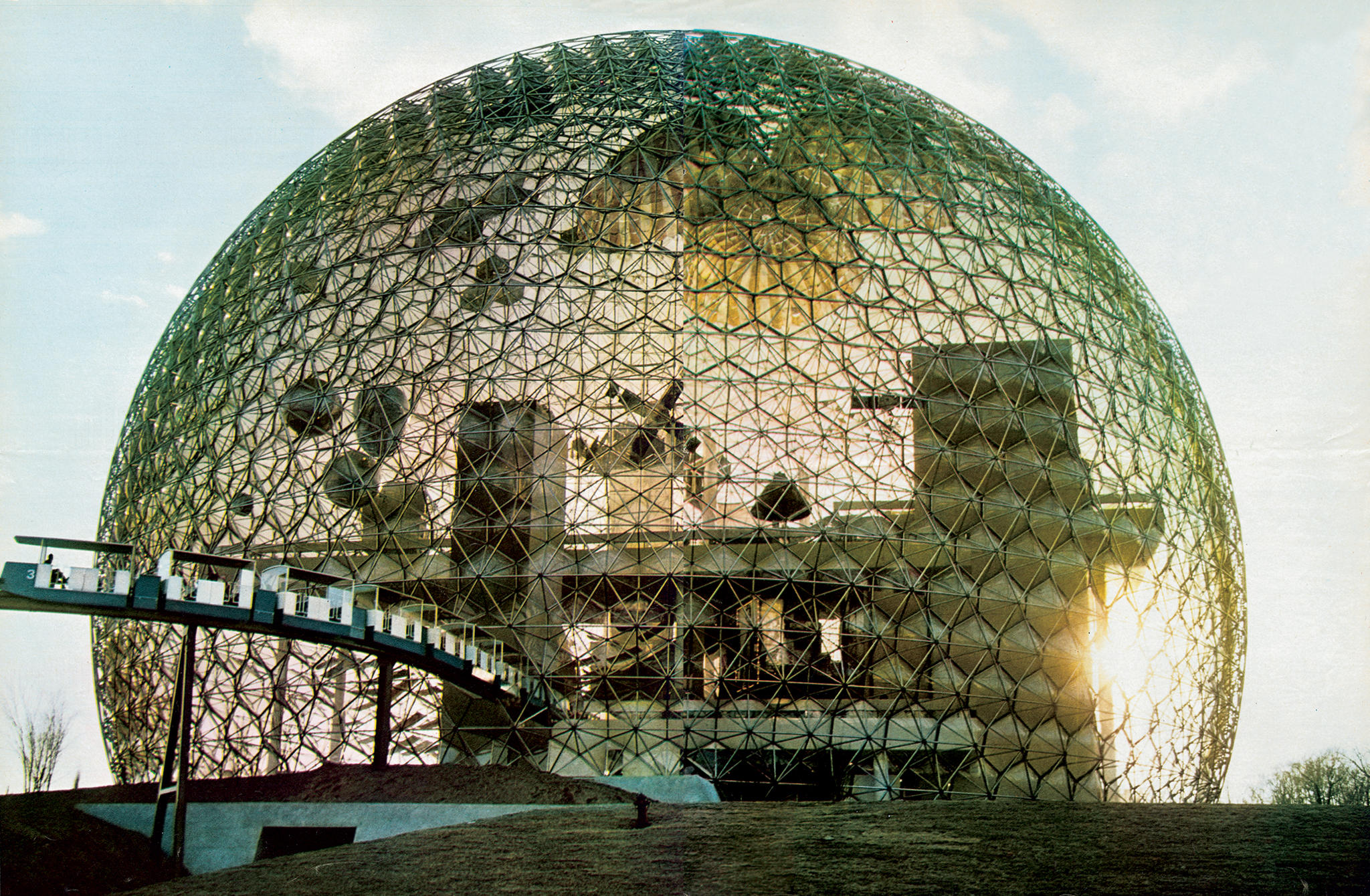 The largest exhibit of R. Buckminster Fuller’s work ever assembled has already closed at the Zurich Museum of Design, but those of you who couldn’t make the trip can now avail yourself to this nifty brick of a catalog. Curator/editors Joachim Krausse and Claude Lichtenstein have done a fine job brushing the dust off of Fuller, but whether their work indicates a general uplift in the technovisionary’s stature remains to be seen. Over fifteen years after his death, Fuller remains an obstinately unclassifiable figure, a man whose many hats — sailor, inventor, designer, ranter, mathematician, teacher, metaphysician, possible crackpot — confuse any attempt to clarify his odd but considerable legacy, a legacy that goes well beyond his famous and now rather quaint geodesic domes.

As Krausse and Lichtenstein make clear with their excellent survey, Fuller’s genius partly lay in his ability to integrate his Leonardo-like talents into one ceaseless drive of thought and activity. Your Private Sky presents a multi-dimensional portrait using personal photos, artist renderings, promo materials, blueprints, graphs and Fuller’s wonderful, almost Dr. Seuss-like sketches to flesh out its restrained chunks of Fuller text and explanatory prose. As anyone who has cracked Synergetics knows, Fuller is hardly a hoot to read, and Krausse and Lichtenstein’s copious images offer a way into the Bucky enigma that sidesteps the man’s dense and deeply convoluted prose. Die-hards, on the other hand, will want to track down the catalog’s equally massive companion volume of texts, Your Private Sky: Discourse.

Born in Massachusetts to an old New England family (his great aunt was the Transcendentalist Margaret Fuller), Fuller was expelled twice from Harvard and would live his life roaming on the fringes of academe, architecture, and industry alike, never making much money from his inventions. Though he only spent a few years in the Navy, the experience provided him with many of the metaphoric building blocks for his budding worldview. What he called his “dynamic sailorman’s thinking” led him to see life and design less as a process of building things than of navigating flows and forces in a resolutely 4-D world. It also gave him an engineer’s sympathy for the war machine that he never really shook.

Fuller was a form-follows-function guy, and had little interest in aesthetics proper. Indeed, with his flush Yankee enthusiasm for the revolutionary potential of industrialism, Fuller could be characterized as a benevolently naive prophet of enlightened technocracy. Nonetheless, the portrait that emerges in the course of Your Private Sky , with its wild sketches, fanciful blueprints, and the strange children’s story Tetrascroll, is just too weird to fit the frame even of a technological visionary. Something else was driving this curious man.

As Victoria Vesna pointed out in a recent issue of Artbyte, Fuller was in some sense a multimedia performance artist avant le lettre. Referring to himself as “Guinea pig B,” Fuller treated his life as an experiment in evolutionary design, recording the results in a monumental journal known as the Chronofile. He also endlessly performed himself, nomadically hopping between hundreds of institutions across the world throughout the 1950s, 60s, and 70s. Lecturing for ungodly hours on end, he would spin neologisms and aphorisms, talking about “tensegrity” and how the square is dead, all the while playing with geometric toys and sketching trippy designs on every available surface. He played a particularly pivotal role at Black Mountain College, where he deeply impressed John Cage. This is not to underestimate the force of Fuller’s ideas. His 1943 Dymaxion World Map, for example, whose sections can be rearranged like puzzle pieces to reveal new political and ecological relationships, was a clever condensation of Fuller’s global view that all humanity shares a single island archipelago in a single sea. But the puzzle map, reproduced in Life magazine with instructions, was also a perfect media intervention.

Fuller remains best known for his innovations in architecture, a field he both honored and disdained. He desperately wanted to get the American home up to speed, to break down our “racquet court shaped chambers” into flowing forms more suited for the streamlined rhythms and rapid pace of industrial America. The Dymaxion houses he prototyped in the 30s — theoretically mass produced and fast to construct — were hexagonal steel pagodas suspended from a central umbrella-like trunk, homes which later became mushroom-shaped saucers reminiscent of flattened grain silos. Though designed for ordinary families, these “dwelling machines” look like they belong in the 1930s Sci Fi fantasy zone that William Gibson called the Gernsback continuum. You’re probably glad you didn’t grow up in one.

More deserving of fame were Fuller’s fabled geodesic domes, which grew out of his mathematical and rather cosmic investigations into 3D geometry (the same sort of stuff that got Pythagoras and Kepler hot). The dome was a hit from the moment it appeared in the early 1950s. The Air Force built them, Ford built them, hippies built them. They were instant utopian sites, creating altered spaces of consciousness. The pioneer freak commune Drop City built geodesic domes out of cut up cars, and one of its acidhead founders once explained their appeal to me: “There are no corners to get lost in. Your eye moves continuously, whereas if you live in a house with 90 degree angles your eyes get stuck all the time.”

The dome’s geometric distribution of stress and tension gave them some surprising characteristics — emergent properties that Fuller, laying the groundwork for smart New Age holism, dubbed “synergetic.” Fuller had always been fascinated with structures whose organizing principle was tension — or “tensegrity” — rather than the usual compression offered by gravity. As Krausse and Lichtenstein note, this move was ultimately metaphysical. “By what is something held together, then, if not the compact mass? By increasingly thin tractive members that border on the spiritual.”

For Fuller, this geometry of forces was more aesthetic than aesthetics itself. He claimed to be building “how nature builds,” and though we are right to suspect such claims, sometimes he was just right. Your Private Sky visibly demonstrates the similarities between Fuller’s geodesic structures and natural forms like the virus protein shells, the radiolarians immortalized by Ernst Haeckl, and, believe it or not, scrotal tissue. Even buckminsterfullerenes — synthetic molecules of carbon 60 named in 1984 for their similarity to the man’s domes — have now been found in meteorites.

But while elongated “nanotubes” of buckyballs may well bring you your first affordable flat panel display, Fuller’s legacy is larger than his concrete contributions. Nowadays, with virtuality driving design and robotics and nanotechnology transforming industry, Fuller’s wacky holistic vision is more important than ever. Self-referential postmodernism has been done to death: we want things that are ecological, pragmatic, and outlandishly imaginative. Take, for example, the CargoLifter, a gargantuan airship currently being built by a Frankfurt outfit that also happened to sponsor Your Private Sky. Larger than the Hindenburg, the CargoLifter is designed to carry 160 ton payloads up to 10,000 km across the earth’s surface at a single economical pop. That’s a long way from Fuller’s more utopian scenarios, but it’s still the kind of thing that will make the 21st century bearable. And you know Bucky’s ghost is at the helm.