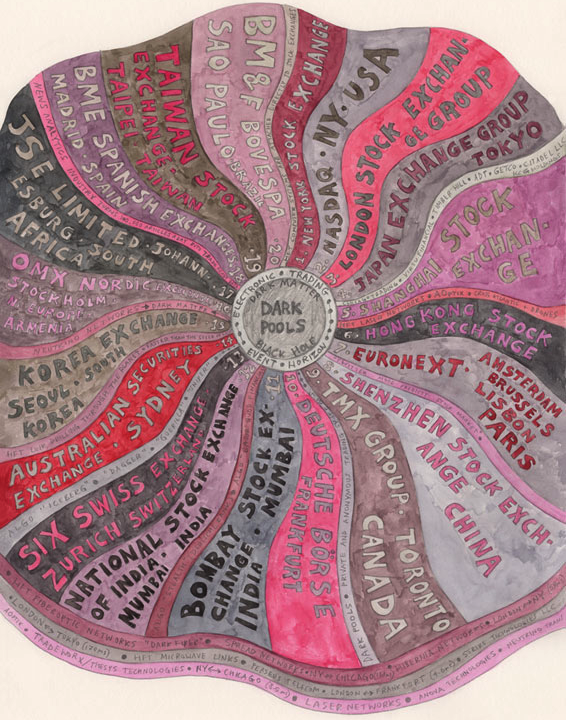 The following foreword appeared in the catalog for HTF The Gardener (Black Dog), Suzanne Treister’s new art project, which explores the fantastic intersection of psychedelics, outsider art, and high frequency financial services. Suzy’s fascinating project, as well as other works mentioned here, can be explored on her generous website.

Once in a while, an object appears in your world with the uncanny force of a Spiritualist apport, like some dream-thing crystallized out of your own personal matrix of symbols and fascinations, of secret wishes and eldritch fears. Such was my experience when a friend hipped me to Suzanne Treister’s Hexen 2.0 Tarot deck. The seventy-eight cards were part of the artist’s Hexen works, which obsessively diagram and dramatize the occult (and occulted) networks of postwar power. By crafting her Hexen deck, Treister had repurposed an oracular device used to reverse the disenchantment of modern civilization into a somewhat sorcerous map of precisely that civilization. Exploiting the surreal designs of alchemical diagrams, Treister invoked many of the figures and forces that had obsessed me for decades: Gregory Bateson and Aldous Huxley, H.P. Lovecraft and Ada Lovelace, the Whole Earth Catalog and the Unabomber, Tims Leary and Berners-Lee. Even beyond this bold crossing of the cybernetic and the psychedelic, the deck suggested that perhaps all its seventy-eight nodes were linked after all: a coincidentia oppositorum of magic and technology, the esoteric and the historical-critical (or, perhaps, the paranoid-critical). But the only way to uncover those hidden connections was to shuffle the cards and submit to chance and association, that old wizard wager that randomness can reveal the pattern that connects—at least when cast before the properly enhanced eye.

HFT The Gardener extends Treister’s impish fascination with esoteric translation, the cybernetics of consciousness, and the hallucinatory aesthetics that radiate from real-world circulations of power. Her fictional character Hillel Fischer Traumberg is an HFT—a high frequency trader. But this HFT is also a contemporary version of HCE, the hero of James Joyce’s Finnegans Wake, who struggles to awake in the wake of modernity’s dissolution of the boundaries that separate art, nature, language, math, money, and the traumatic Traum of history. Driven to uncover that same elusive pattern that connects stock prices to future values, HFT winds up constructing new patterns of his own—patterns that loop together trading algorithms, psychoactive plant taxonomy, altered states of consciousness, and methods of correlation drawn from Jewish mystical exegesis. 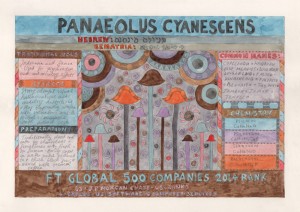 Despite the initial shock of Treister’s juxtaposition of esoterica and the financial sector, the notion that mysticism or psychedelics might somehow resonate with the white-hot feedback loops of the global market should not exactly surprise us. The hippie notion that altered states inevitably spawn groovy Gaian togetherness has already been crushed by the Silicon Valley billionaires driving their RVs to Burning Man packed with molly and the latest Chinese-hacked tryptamines. Moreover, as the Amazonian brew ayahuasca spreads its enchanted tendrils deeper into Western high societies (in both senses of the term), it becomes difficult if not impossible to draw the line between counterculture renewal and mainstream hustle. But there are earlier precedents as well. Gordon Wasson, who brought the news about Maria Sabina and her magic mushroom cult to Life readers in 1957, was himself a VP at J.P. Morgan bank, while many of the movers and shakers of the Foundation for Economic Education, the granddaddy organization of American libertarianism, were introduced to psychedelics in 1950s California. Market psychedelia has precedence, in other words. As one conservative historian quipped in the title of an article about these laissez-faire trippers, “The chairman of the board took LSD before Timothy Leary.”

There is a deeper magic at work as well: the magic of abstract correlation, pattern matching at its most denatured. Today, computers are producing “knowledge” of markets, human behavior, and other complex systems by mining statistical patterns that connect a vast amount of superficially unrelated data points. These correlations, which increasingly inform economic decision-making and “artificial intelligence”, are frequently detached from underlying scientific insight into why particular data points form correlations in the first place. Stripped of rational understanding, the correlations themselves suffice. And this is to say nothing about the tsunami force of high frequency trading itself, whose algorithmic arms race has now reached the beachhead of quantum physics. Are these market mutations really so distant from the labyrinthine patterns of correspondence that make up kabbalistic esoterica and its ever-expanding forêts de symboles? If mystic correspondences can be discovered—if two words can be shown to have the same numerological value through gematria—then those links can be made to work operationally, especially when trance, dream, or other altered states are involved. Market predictors based on astrology and numerology already exist in the fringes of trading world, but even more essential is the mania for esoteric mathematics itself, a mania that in Darren Aronofsky’s 1998 film Pi also loops together logic and Kabbalah.

HFT takes this mad mathesis in another direction, extending psychedelic pattern-making beyond market algorithms to include psychoactive plant alkaloids. Why does The Gardener turn towards ethnobotany rather than the exploding global market of novel designer drugs, whose ceaseless, hyperactive multiplication so richly reflects the mutant excesses of the financial sector? Perhaps HFT recognized that even our monstrous market remains, for all its science fiction intensity, inextricably bound to the intelligent matrix of the biosphere and the ancient and frequently animist cultures who could take it all in back in the day. On the other hand, Traumberg’s search for esoteric codes inside plant chemistry reminds us of capitalism’s drive towards the total colonization of planetary life. More specifically, it recalls the corporate bio-pirates who appropriate indigenous plant medicines as intellectual property. Or maybe Traumberg, like so many psychoactive plant nerds, just fell in love with the botany of consciousness, which simultaneously grounds and galvanizes the search for other ways to be and know. 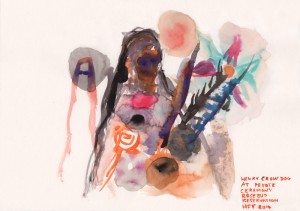 HFT The Gardener’s “Outside artworks,” which are the heart of Treister’s project, revel in these ambiguities. Take one example: the image for Amanita muscaria—the colorful fly agaric—recalls fractals, Paisley designs, and Huichol yarn paintings. But the beautiful enigmas of the mysterious mushroom are rather sharply curtailed by the names Pfizer and Wal-Mart, appended below. Or think of Cannabis sativa, a plant that has been smoked by humans for millennia, which HFT’s mystic permutations linked to a few oil companies and Microsoft.

On the one hand, whether we recognize it or not, humans are still swimming in vast and ancient streams of plant lore. For many of the cultures that used these plants, such knowledge and practices were aimed at opening sacred or daemonic domains of encounter. In the modern era, the era when the neoliberal market achieved global dominance, these ancient ways proved to be a siren call for countless bohemians, mystics, and psychotherapists, as well as the occasional spook. For these seekers, the planet’s botanical dimensions seemed to hold out the possibility of cultural resistance or renewal, or at least a weird and wonderful escape. But the message of Traumberg’s water-colors is that there is no escape. Writing from the United States, I can tell you that cannabis is already being radically reframed and refashioned by the medical and recreational marijuana markets that now pockmark the country. The widespread availability of botanical and synthetic psychedelics is definitely going to kaleidoscopically magnify life in the belly of the beast, but any portals they open up to the Outside may, in the end, prove to be nothing more than folds in its guts, further vectors in the market’s colonization of the unconscious. Algorithmic animism.

But there is another sense in which the “Outsider” quality of HFT’s works cannot but be read ironically. One of Traumberg’s (and Treister’s) central inspirations for these oddly colored, data-dense charts are the extraordinary cosmic diagrams of Adolf Wölfli, whose life-long institutionalization for psychotic hallucinations and child abuse certainly makes him a social outsider. But Wölfli is remembered now as perhaps the first “outsider artist”, an identity that, largely in retrospect, helped to bring passionate attention to the works he produced, as well as the brut, claustrophobic, and bizarre works of a myriad of other formally untrained and not-exactly-neurotypical art makers. At the same time, the critical location of such aesthetic “Outsiders”—appropriated naively by Traumberg, and self-consciously by Treister—has in turn established a new zone for the extractive logic of the art market. Among today’s orbiting elites and oligarchs, this zone has become as white-hot as self-learning genetic trading algorithms. Again, there is no more Outside—which maybe means that the inner life is, once again, open for business. 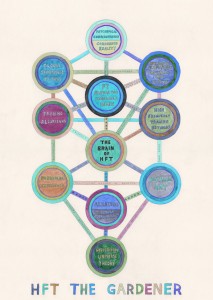