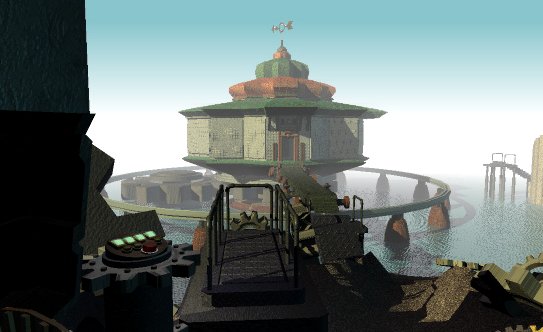 In the third grade, we loved The Hobbit so much we wanted to live in it. And after school, screwing around in the arroyos that sliced through our SoCal neighborhood, we did, projecting Mirkwood and the Misty Mountains onto a landscape of sandstone cliffs and chaparral. Today’s technoculture mavensLas Vegas hotel architects, interactive game designers, virtual reality gearheadswant to engineer a similar sense of immersion: the peculiar feeling that you have passed from this world into some undeniable other. But this questin some the most powerful notion of “progress” retained in our media cultureis destined to grow ever more vertiginous: as our silicon-based reality engines heat up, they will underscore how virtual our being already is. Imagination is the original interactive multimedia; jerry-rigging virtual maps and models, sampling the media of the senses, it constructs a world that is simultaneously the story of a world.

The hit CD-ROM Myst is the first home computer game I’ve experienced that produces the almost haunting sense of having passed into some parallel place. Engrossing where other games are merely compulsive, enchanting where others are clichéd, Myst provides compelling play devoid of killing or the threat of being killed. Released for Macs late last year and PCs in February, Myst has sold scads of copies, reaped awards, and set forest fires of buzz across the multimedia-scape. Industry honchos suggest that Myst may well turn out to be the “killer ap” for CD-ROMsthe application that makes the already increasingly ubiquitous computer appendages a must-have.

Myst may also prove to be one of those works that irrevocably changes the parameters of an art form, multimedia’s equivalent of Don Quixote or Sgt. Pepper’s. But for all its cutting edge, the central icon and thematic device of Myst is that hoary, anachronistic media that all these fancy new machines are supposed to supersede: the book. Not “writings,” and certainly not “text,” but big, heavy, leather-bound tomes, strewn throughout the game’s pocket worlds. In Myst, books are gateways, prisons, keys, and legendsas much maps as stories. Some are burned and fading, some are marked with charts and diagrams, and all flutter with the rustle of yellowed parchment when you turn their pages.

The game opens with an animated sequence of a book falling through a fissure of stars while the craggy voiceover of its creator worries that the book, whose “ending has not yet been written,” will fall into the wrong hands. And then the cloth-bound volumeentitled Myst, of coursefalls into your hands, awaiting the click of your mouse. Open the book and you’re transported to a creaking dock on the small island of Myst. From there you explore the island’s pine forests and beautifully rendered structures: a log cabin, an underground power station, a wood-paneled library, a planetarium, a group of Greek pillars, a docked Tom Mix spaceship. An eerie loneliness settles about you as you realize that the place is abandoned, and this solitude whispers the goal of the game: to discover what rendered this gorgeous island (and the even moodier lands it leads you to) empty.

After perusing the library and picking up a few clues, a story begins to unfold. The island was once home to the inventor Atrus, who discovered the Art of writing books which could create and transport people to fantastic worlds. In a few messages left to his wife, Catherine, Atrus implies that something or someone had begun destroying these worlds, and he casts suspicion on one of his two sons, Sirrus or Achenar. As you proceed, literally “making your way” to the handful of other book-worlds (or Ages) described in the library, you piece together fragments of the tale.

If stories provide the game’s allegorical depths, Myst’s digital environmentsound, images, interfaceprovides its hypnotic surfaces. Realizing that the ear builds a sense of embodiment as much as the eye, the Miller brothers not only created a subdued soundtrack of ominous keyboards, but filled their worlds with wind, waves, slamming doors, underwater bubbles, dank dripping caverns, crunching parchment, and buzzing, clanking machines. Similarly, it’s the striking detail and intense texture-maps of Myst’s 2500 rendered images that really carve out a sense of place: marble floors, inlaid carvings, steel walls, weathered wood, rock cellars. Along with the spooky ray-tracinga virtual light-source that casts shadows and glinting reflections across these surfacesthis vivid density gives the Ages of Myst a hallucinatory, slightly sepulchral quality that publisher Broderbund calls “surreal” but would more accurately be dubbed “hyperreal.” These spaces are so strange and evocative you don’t mind the occasional cul-de-sac the Millers throw your way.

Unlike Virgin Interactive’s 7th Guest, a similarly ground-breaking CD-ROM game that features “cinematic” animation between spaces, Myst’s images proceed in chunks, still frames fading into one another like dissolving David Hockney snap-shots. Of course, this is only a design limitation if you believe that CD-ROMs should emulate cinema, or that immersion is identical with simulating the movement of physical bodies (a naive literalism that drives much VR design). The Millers know that the pictures in books of fairy tales or comic books provide our first glimpse of virtual worlds, and that the enchantment provided by these pictures is empowered rather than weakened by stillness and defined borders. So Myst’s images pass into one other with the evocative grace of turning pages.

But while books provide Myst’s central structuring and thematic device, writing plays little role in the puzzles themselves. You navigate the ways between and within Ages by figuring out how to manipulate the Miller’s ingenious low-tech array of buttons and pulleys, levers and pumps, elevators and dials. In most adventure games, you tote around inventories of objects that help you crack the puzzles, but Myst’s curious machines force you probe the immediate scene for triggers and graphic clues. This spatial investigation not only sidesteps the clichs of text-based adventure games that still dominate many computer games, but sucks you deeper into the Miller’s virtual environments (you realize how compelling their interface is when you start habitually searching your kitchen for hidden buttons and cranks).

It’s no accident that the Miller brothers first developed their hands-on, exploratory game design for the kiddie software market. Their simple but compelling floppy disc worldsCosmic Osmo, The Manhole, and Spelunx and the Caves of Mr. Seudothrilled tykes who could barely read and blew away many an interface designer as well. But while Myst carries on the Miller tradition of nonviolent spelunking through virtual space, there’s nothing childish about this spooky world. Like Neil Gaiman’s Sandman comics or John Crowley’s literate fantasy novels, Myst is fabulation with a dark, complex edgeespecially as you find out more about Sirrus and Achenar, and the dark fetishes they’ve squirreled away in their hidden chambers scattered throughout the worlds. If Myst were a book, you’d call it a mature work of Science Fantasy: a metafiction which blends technology and magic, tips its hat to Jules Verne, Edgar Rice Burroughs, and Umberto Eco, and whose obsession with gears and pumps lends it a 19th-century “steampunk” flavor.

But Myst is not a book, though the complex background story the Millers wrote about Atrus and his Ages will eventually be published as one. Myst is a machine disguised as a book, a narrative Rubik’s Cube etched by M.C. Escher and packed inside a virtual Cornell box. One of the models that drives digital narrative design is the assumed desire to become a character in a movie, making choices that drive different plots to fruition. But by constructing a world where worlds are constructed by story-books, and then having the reader-player find those books and reconstruct their fragmentary stories, the Millers complicate this desire for narrative experience in a manner as postmodern as Borges and as mythic as the nested tales of The Arabian Nights. In Myst, the books are already behind uspenned by Atrus, by his sons, by Rand and Robyn Millerand we are metafictional detectives, picking up stray pages of ruined tales.

All of which puts an intriguing spin on the fact that the Miller brothers, solid Christians, follow a religion of the Book. Sons of a non-denominational preacher who they still live near in Spokane, Washington, the Millers are family men who eschew the violence of most digital adventure games for a reason. And Myst features more overt traces of the faith as well: the Father’s good-book creation ruined by his offspring, the tension between brothers, the tower that was originally intended to resemble the Tower of Babel (the insignia of the evil Black Ship that figures in the tale of the Mechanical Age resembles of the star and crescent of Islam, but that’s probably just my own True Lies-induced paranoia).
But the real issue is the Art that Atrusand by extension the Millerswields, a clearly demiurgic magic which usurps God’s role as creator. The brothers dodged this issue in their recent Wired magazine cover story, but an answer of sorts lies in J.R.R. Tolkien’s essay “On Fairy Stories.” Like his friend C.S. Lewis, Tolkien was a hardcore Christian (though unlike Lewis’ Narnia books, The Lord of the Rings is devoid of overtly Christian symbolism). For Tolkien, creating viable works of fantasy is not a matter of representation or symbolism but an act of “sub-creation” that builds a “Secondary World which your mind can enter.” Tolkien figured that if this world worksif it succeeds at immersionthen it must secretly share in the substance or logic of the implacable Creation that inevitably returns to us when the last page is turned (or the virtual puzzle is solved). “We make in our measure in our derivative mode, because we are made: and not only made, but made in the image and likeness of a Maker.” If the makers of Myst are straight-up Christians, than God must remain the Father of the ultimate book of worlds. But God only knows what’s going to happen now that the book is digitized.