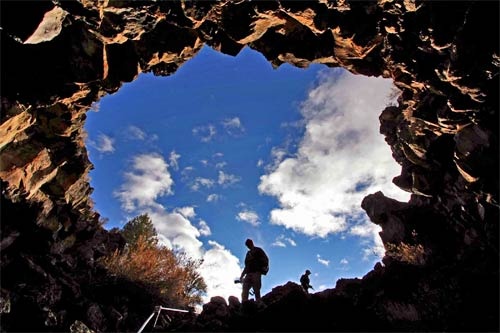 I first heard about California’s Lava Beds National Monument from a deeply traveled tantrika who proclaimed the desolate, faraway region east of Mount Shasta one of her favorite spots on the planet. Volcanism is always cool, but the area’s strange and evocative terran formations are also the site of California’s one major Indian war, fought when Captain Jack and a tribe of Modocs held off the US army for months in a protracted, bloody siege. More than most National Monuments, Lava Beds is one of those rare landscapes where bizarre geology and heavy history form a single psychogeographical sandwich. 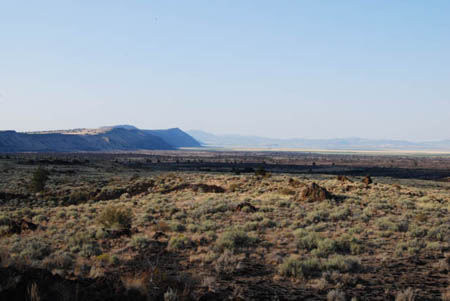 I could not hold off from such yumminess for long, and so last week Fer and I piled into her 86 Vanagon and made the trek to the most remote area of our fair state. We approached the park at night, hurtling past the bird-choked remnants of Tule Lake down a quiet highway, with the silhouettes of great-horned howls altering the archetypal outlines of the telephone poles into something decidedly more spooky. The hot, blue morning revealed a dry land of chaparral, juniper, mountain mahagony, and exposed rock, decorated with various cinder cones and pimple-like volcanic buttes. The whole area forms the foothills to the Medicine Lake formation to the south, a sorta dormant volcano with bizarre obsidian outcrops and lava fields so alien they brought the Apollo astronauts here to train in the 1960s. But the most amazing feature in the area is its vast network of lava tubes and attendant caves of the Monument itself, which you can’t really see until you are standing right before their cool, dark, inviting mouths. And enter we did. With the local rangers—a particularly cool and intelligent bunch—maintaining the CCC-era trails through the caves, and providing the unprepared with plastic hard-hats and lanterns, the mysteries of cave exploration were handed to us on a platter still rough and atmospheric enough to thrill. Call it spelunking lite. 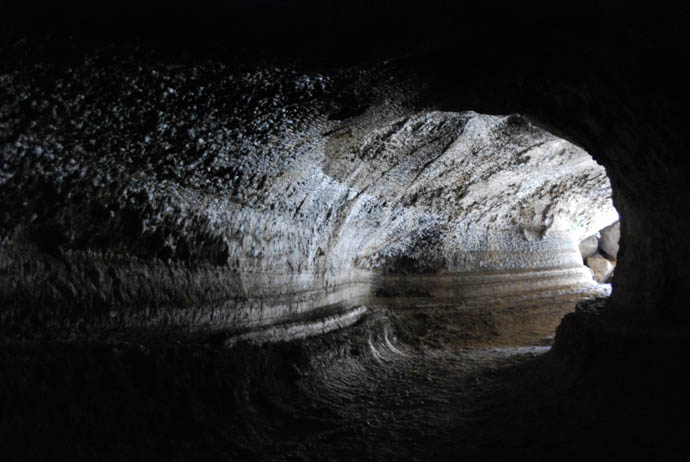 The lava tubes themselves were formed when the outer surface of hot magma rivers cools and hardens while the melty stuff continues to flow until it too finally cools. Everywhere inside you see the signs of earth’s bravura, its propulsive, incandescent flows leaving marks like stone fingerprints of the volcanic Tao. The vibe is primeval, and not a little violent. At the same time, the tube surface can feel and look a lot like concrete, and given the smooth walls, organically-shaped passageways and surprising antechambers—not to mention ceilings that sometimes resemble dripping chocolate sauce, or moldered frescos—it becomes difficult to avoid seeing the tubes as the biomorphic catacombs or dungeons of some artful race of sewer gnomes. A few of the larger, auditorium-like cave openings are decorated with simple but powerful monochrome pictographs, a native trace that only confuse the issue of signs and significations—one image looked like a stylized Tree of Life, and another a simplified take on Dr. Dee’s hieroglyphic monad. 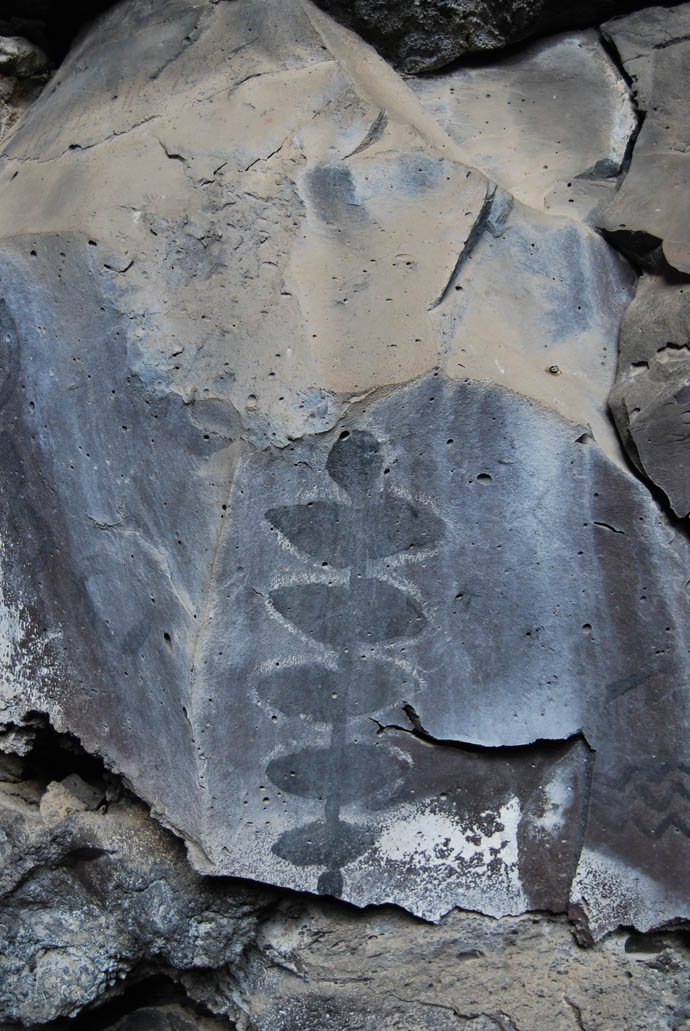 When the ceilings of the lava tubes fall in, little boulder-strewn transitional gardens are created between the cool cave interiors—which are, relatively speaking, quite warm during the brutal winters—and the high desert outside. Fer and I came across the following spot in Juniper cave. A log had slid through the opening from the surface to rest on a well-worn pile of stones, creating a bridge between cave and sky that for all the world resembled some iconic wizard staff resting on an altar, an effect only heightened by the two orbs of nothingness that flanked the staff, as the beckoning cave shaping its voids into hollow eye sockets that seemed to stare back at us. Sitting in this amazing place, we were treated to a nifty if not very cordial visit from one of the local Townsend’s Big-Eared bats—a slight but persistent fellow who was irked at our presence and kept dive bombing us with a flurry of extra wing noise before he took off with some pals down into the empty sockets of this skull cave. 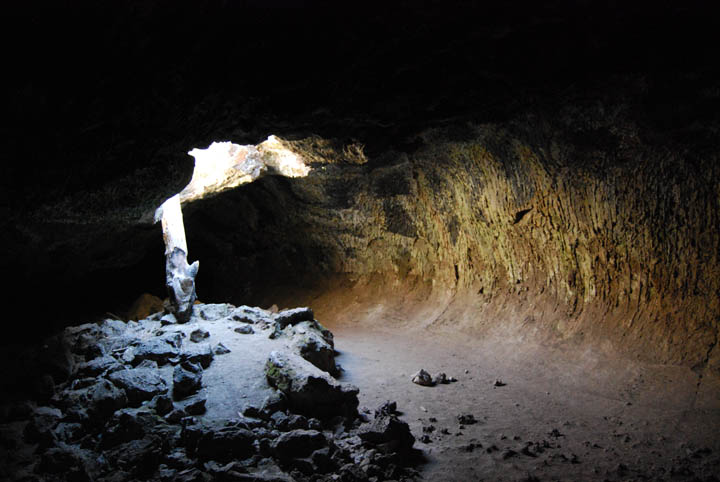 The coolest thing about the Lava Beds Monument though is that its gothic geology is more matched by the ghosts of soldiers, settlers, and Modoc warriors that saturate the land. The Modoc War was the Vietnam of America’s nineteenth-century Indian Wars, and will be the subject of my next post.