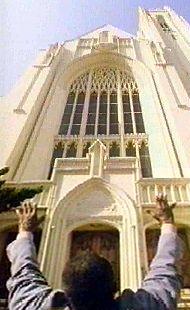 Originally appeared in The Village Voice, May 18, 1993

Remember three years ago, when Laura Palmer’s bloated blue lips opened up a hole in your TV? Part of the thrill of those first episodes of Twin Peaks was the fact that something so self-consciously strange had no business being on network television. Even if the show’s pregnant nothings became cloying over the weeks, the space it opened upmenacing, surreal and tediously obliqueseemed to signify some larger mutation of the airwaves. For Lynch did much more than sneak pomo idiosyncrasies onto the airwaves, or become an auteur in a medium that disavowed them. He did something to TV itself. He made that blaring, banal common-denominator box, the engine of so many small-town suburban myths, dream out some of its darkness.

But except for the light blooms of Northern Exposure, not much grew in Lynch’s cathode garden, until Bruce Wagner and Oliver Stone planted the six-hour mini-series Wild Palms. Loosely based on Wagner’s slick and odd-ball comic strip in Details magazine, Wild Palms is drenched in Lynch language: ominous slo-mo pans of residential streets, hermetic dialogue, Buddhist dollops, references high and low (Dante, Stevens, 101 Dalmatians), avant-weird soundtrack (Ryuichi Sakamoto), even a creepy lounge singer. If postmodernism didn’t open itself so willingly to its own appropriation, Lynch should sue.

But while Twin Peaks and Wild Palms both pervert TV’s time-honored structuring device of the soap opera into erotico-metaphysical conspiracy, the two shows have very different vectors. Twin Peaks was a hypnogogic wet dream of Mayberry, R.F.D., warping the familial psychology that lies at the heart of TV’s abiding picket-fence past. But Wild Palms hallucinates the future, or TV’s future anyway, tossing the dynasty dynamics of a SoCal Knots Landing into the empty swimming pools of J.G. Ballard, the drug-induced simulations of Philip K. Dick, the chilly virtual realities and street dystopias of William Gibson (who makes a brief cameo). If Twin Peaks always kept a smirking distance on its world, Wild Palms jumps in head-first, knowing that the only way to grok the ontological vortex of future media is to give into the undertow.

Set in Los Angeles in 2007 AD, Wild Palms concerns a network of artists, hackers, housewives, shrinks, revolutionaries, and psychic vampires who revolve around the bronzed power-hungry patriarch Senator Tony Kreutzer (Robert Loggia), demagogic founder of the enormously popular Church of Synthiotics. A Scientology-like therapy cult, Synthiotics preaches that there’s more than one reality (“no different than Buddhism”), and Kreutzer’s new holographic TV network, Channel 3, aims to prove it. Stealing a tip or two from Philip K Dick’s Three Stigmata of Palmer Eldritch, Kreutzer’s holos are enhanced when watchers drink Mimezine, an empathogenic designer drug which creates the sense that the holograms are physically real. But Mimezine is addictive, drawing users into a psychic constructappropriately, a cathedral lorded over by the senator, who hopes to harness the dreaming power of humanity and use it, along with a super-dense “Go” chip, to become immortal.

Our guide through all this haze is the protagonist Harry Wyckoff (Jim Belushi), an impotent attorney who dreams of rhinos and is sucked into the senator’s plots when he begins working for Channel 3. Harry is apolitical everyman, whose naive embrace of the senator’s power is at odds with his desire for “a decent place, where people respect reality.” He’s hit on by everyone, destroys a family that’s less his than he believes, and, in the time-honored tradition of conspiracy theories, discovers things that everybody else already seems to know.

Belushi does a great job with Harry, coming off like some strange SNL cross-breed of Bill Murray and brother John. This eerie sense of mutant TV dynasties is furthered by Ben Savage, younger brother of The Wonder Years‘s Fred, who plays Harry’s demonic son Coty. In her role as the senator’s dragon-lady partner Josie, Angie Dickinson uses her flat TV aura and plexiglas flesh to put the creepy back into camp, while China Beach‘s Dana Delaney and Cheers‘s Bebe Neuwirth both create a resonance between Wild Palms‘ weirdness and conventional network fare. These echoes are not only entertaining but ominous, creating the sense that TV cannot even hold its own poor simulacrum of normalcy under control.

With clues blinking like porn-store neon, sub-plots proliferating at coke-head pace, and lines like “Beat me up, Scotty” and “Partying is such sweet sorrow,” Wild Palms achieves the coherence of a restless cyber-yuppie’s dream journal. Fans of the strip or readers of the fine Wild Palms Reader (with contributions by Bruce Sterling, Genesis P. Orridge, Jane Pratt and other luminaries) will do okay, but folks without a scorecard will simply be baffled. The various intrigues only begin to cohere after a few hours, and they never really hang together.

That’s part of the point of courseafter all, does your world hang together? When it’s rolling, Wild Palms becomes a symptom as much as a story, capturing the giddy sense of slipping into a future where an unholy alliance of technology, media, and pure power are tugging apart the dense social dream of the world (and letting some hungry ghosts loose in the process). For all its obscure excess and arch dialogue, Wild Palms has the courage to push TV postmodernism beyond Lynch’s secret handshakes or MTV’s depthless flash to a techno-ontological engagement of the medium’s own nascent future as virtual reality.

Folks sick to death of happy-hippie visions of VR will appreciate Wagner’s dark take on VR, which casts VR less as a specific technology than a metaphor for the mode of simulation which undergirds our culture. For Wagner, VR’s theme song is Brian Wilson’s “In My Room”sung by the cheesy Synthiotic singer Chap Starfallwhich capture the technology’s potential for a solipsistic and infantile regression (especially pronounced, it seems, in California). When Harry first meets the VR genius Chickie Levitt in his grungy sea-side shack, the strung-out cripple doesn’t even take off his VR glasses to say hello. When Harry dons a pair and slips into a virtual ballroom, meeting a smiling Chickie dancing with a beautiful woman, the effect is not one of transcendence or adventure, but a kind of spiritual depravity (every CD or software hoarder will appreciate the street scene of destitute vidiots jonesing for holo-discs like crack-heads). A later episode opens with a slinky Japanese trio singing near the senator’s swimming pool. We only realize they’re holographs when Kreutzer abruptly turns their volume down, and then changes the channel to Sumo wrestlinga scene which demonstrates how the technology just metaphorically extends the same old sick power plays.

And it’s Wild Palms‘s awareness of power in the postmodern sensorium that makes the show interesting, even while the narrative sticks its head down too many blind alleys. With his demonic hold on people’s imaginations and a personal power that would make Tony Robbins’ teeth chatter, Kreutzer is more than Big Brotherhe’s the broadcast Antichrist. The city of quartz has devolved so much by 2007 that Kreutzer’s private army of men in black are given free reign to beat up rivals and kill members of the Friends, a literally underground anti-authoritarian group devoted to overthrowing Kreutzer. Between its bomb-tossing rebels and the mass apathy towards violence, Wild Palms sketches the paranoia and chaos that lurk in the urban future, a process admirably summed up by Harry: “There’s no police. Maybe it’s the other way around. Maybe there’s nothing but police.”

Thugs aside, Wild Palms fears the specter of the senator’s virtual power not because it thinks that Kreutzer’s Synthiotic New Age philosophy is bunk, but rather because the show buys into Synthiotics’ underlying premise: Reality is a construct, and a malleable one at that. Many folks, from cultural semioticians to Buddhists to hard-core brain scientists to New Agers, already accept some degree of this notion. Wild Palms imagines a world where the bad guys know this and use it against us. But even if this makes Wild Palms yearn for “a decent place where people respect reality,” the show’s own techno-shamanic style bespeaks the impossibility of such a space.

For all of Wild Palms‘s psychedelic flavor, there’s nothing mystical about the virtual shift it foresees. Or rather, it is an engineered mysticism, an effect of the apocalypse of TV that the miniseries both anticipates and participates in. For Channel 3 is just an extension for a process we’re already immersed in, with 500-channel cable networks, telco info services, CD-Is, and satellite downloads just around the bend. As such, Wild Palms‘s media paranoia articulates a doubled anxiety: our fear that we will dissolve into TV, and TV’s fear that it will dissolve into virtual limbo.