I Can See the Waters Rise 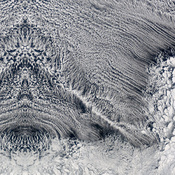 The idea of a long-lost sunken continent called Lemuria first emerged as a scientific concept in the nineteenth century, when natural historians tried to explain the uneven distribution of lemur fossils across Africa and the East. But it did not take long for the concept—which plate tectonics later rendered unnecessary—to drift into the occult imaginary. According to the famed Theosophical trickster Madame Blavatasky—not to mention, I should fess, Wikipedia—Lemuria had been ruled by the hermaphroditic, egg-laying, seven-foot-tall witless mystics who constituted Theosophy’s “Third Root Race.” Later the race degenerated—as do we all. According to the fabled Book of Dyzan, the Lemurians took to bestiality and were condemned to sink into the sea by the disgusted higher agencies, making room for the bigger-brained Fourth Root Race, who lorded over Atlantis until they, too, blew it.

The fact that the San Francisco psych outfit the Lumerians spell their name oddly may indicate they are escaped Third Root mutants, or perhaps punsters who want to invoke luminosity. Their hometown show last night at the Independent did feature a continuous cinema show, mostly black-and-white loops of vibrating oscilloscopes, Sixties titty shots, swirling Lidsville spirals, and hypnagogic patterns that reminded me of Harry Smith’s abstract animations. Their music rose to the occasion: drony, tribal, and fresh, with one foot in the Sixties and the other in a shoe worth gazing upon. Though guitars occasionally appeared, the two keyboards carried the greater load—one a wheezy vintage electric organ played by a fellow with an aggressive mop top, and the other a more contemporary arrangement of synthesizer and pedals played by, you know, that kid in gym class who managed to weird out the coach enough so that he could just sit on the bleachers reading SF novels. Between their two faux guitars, these two characters managed to create a nice digital/analog yin-yango, with the organ punching like a scrappy druggy-punk rhythm ax, while the synth rig squeezed out wailing sirens and soaring, crystalline leads that contrasted well with the reverberant crunch of the vintage circuitry and the band’s arsenal of tube amps.

In the rhythm section, a rolling tribal groove held sway, although the bass playing somehow reminded me more of dark goth New Wave music. Indeed, though the band’s Sixties tags are obvious, the era the Lumerians most invoked for me was LA’s Paisley Underground, and especially the hypnotic bittersweet laments of Opal. The proceedings were not dominated by retro, in other words, but by flavor. The vibe was evocative, the groove smoother than it could have been, and they made sure everything was spiced with lots of percussion. The group were even willing to split some of that door take on a bandmate in a high school basketball t-shirt who only played the congas. Such a wayward act sets a scary precedent for a psych-rock band, but thankfully the fellow managed to fill out the drummer’s garage-rock rumbling with texture rather than flash.

Unfortunately, the sound was even worse then it usually is at the Independent, a large echoey room that scatters instruments. I was hoping for the full, luxuriant sound that helps make the Lumerian’ recent self-titled vinyl LP on Subterranean Elephants! such a treat. But vocals, bass, and congas were mixed far too low. I couldn’t tell if the great female vox on the EP was just a fluke, or whether the two women onstage were just underserved by the sound guy. And if you got in the direct path of the organ’s Fender amp you were a goner. Me and Nat had to thread our way throughout the hall to find the choice spot, but by the second half of the set, when the band sunk into the long, saturated grooves of their two best and most phantasmagoric songs—“Orgon Grinder” and “Corkscrew Trepanation”—we were grinning like mystic idiots.