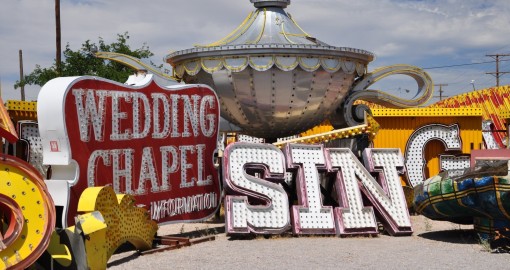 I’ve been to Vegas four or five times in my life, and most of the time it takes about two hours before I’m totally depressed, hollowed out and captured by the bardo of cheese and loss that lurks beneath the blinky neon surface of the American Dream. This was not the case about my trip last week, however, though the hungry ghosts were everywhere afoot. This time I managed to enjoy the glittery void, to appreciate the histories of enchantment that shape the place, and to find my own simulacra-savvy way to “learn from Las Vegas.”

The wife and I took off from San Francisco after I finished the exhausting workshop run of the rock opera How to Survive the Apocalypse. Two important players and co-creators of a “show within the show” were Scott Levkoff, aka Professor Violet, and his partner Polly Superstar. It was Polly who had found an astoundingly cheap online deal that combined airfare and cheap rooms at Circus Circus, a breakthrough Sixties casino whose current status on the strip was aptly summed up, as Polly pointed out, by the condition of its massive neon icon: a manic clown clutching a now empty and gutted marquee. 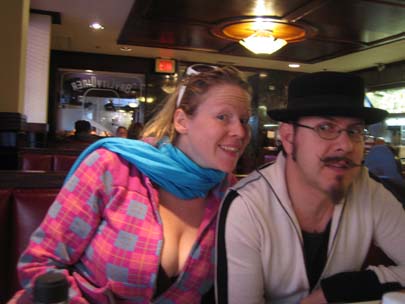 Fer and I were picked up at the airport by Paul Vigil, a close-hand magician and mentalist who I met through a mutual magician friend who lives in Italy. Vigil was an elven-eyed psychonaut wizard who looked a decade less than his 37 years, and he took us to his pad and blew our fucking minds with four playing cards and as many quarters, which seemed to vanish into thin air and return just as improbably beneath the veil of an ace of spaces.

Vegas is a mecca for modern magicians, and Vigial makes a good living doing mostly corporate gigs. But the town is also a shitty place to live, and Paul was clearly thrilled to show off his extraordinary talents to some fellow freaks. Vigil’s style was not only jaw-dropping and uniquely honed (he developed his moves himself over decades of monk-like devotion). His magic, which I realized only later extended to the moment he first picked up, was a true expression of the trickster spirit—nonaggressive, mischievous, a winking revelation of the cracks in the world rather than the arrogant claim of supernatural power or skeptical nobility. He neither sought to dominate with the machismo of “tricks” or to disenchant the wonder a la Penn and Teller or Darren Brown. He wanted to create an experience rather than take one away—an experience of the liminal, of a true passageway beyond the world we know.

Which is a good enough way to approach Vegas—as a crossroads of desire and fantasy and cold hard reality. Scott and Polly were old hands at the place, and they took us to  corners of casinos, showed us the ropes on getting deals, and most of all provided the proper framework of absurdist celebration, fascination, and a repulsed astonishment that contained, in seed form, the wisdom of the broken dream. All of these dimensions were familiar to me, crazily enough, from Burning Man, whose connections to Vegas go deeper than the superficial similarity of these two blinky desert cities of desire, digging down instead into the very nature of attraction, of the erotic technology of attention.

Scott and Polly, high-octane Burners and visionary clothes-hounds, were the perfect avatars for this ride. The sorta-high-class titty shows we caught were fun, as was the afternoon visit to the 70s hologram of the Peppermill Lounge, and the impromptu drunken revel the four of us staged on a bench tucked up near the apex of the Luxor. But the high point of the vacation was definitely the Neon Museum, which fills up a couple of formerly vacant lots called the Boneyard, which lies a mile or so north of the strip. With a motto of “Reclaim, Restore, Remember,” the Neon Museum collects the cast-off relics of Las Vegas’ great technocultural innovation: the definition of city space through the fantastic deployment of themed neon signage and sculpture. 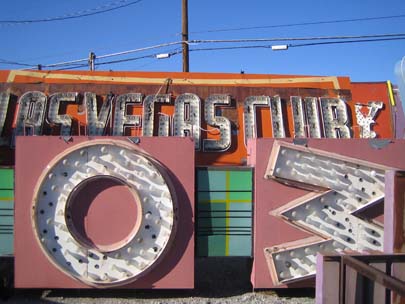 The collection is astounding, at once hipster-heart-warming, exuberant, and naïve. It is material history at its most virtual, the sort of commercial colonization of the unconscious that verges on dream. But with all the rust and broken lightbulbs, the fade of history was everywhere present. Vegas is a constantly innovating city, a place with no more memory than it has clocks, and so the work of memory becomes an almost sacred reclamation of true time and the sort of wonder and innovation that can be recognized only in retrospect. 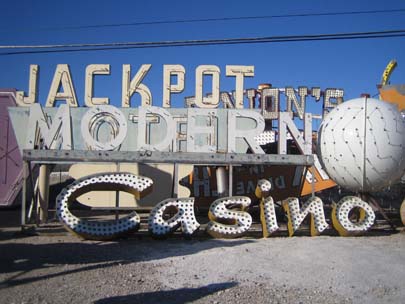 The Neon Museum will eventually become a proper museum where you can wander about on your own. The organization recently managed to save the beautiful, Brasilia-worthy husk of the Concha hotel lobby, which will become the centerpiece of their museum complex. At the moment, though, you need to call ahead and arrange a tour, although our guide was a font of knowledgeable enthusiasm, though I would have preferred a less PG-rated spiel. But the place is excellent, and a fine tonic to the sucking wind of meaningless despair that blows through this desolate Nevada sinkhole. 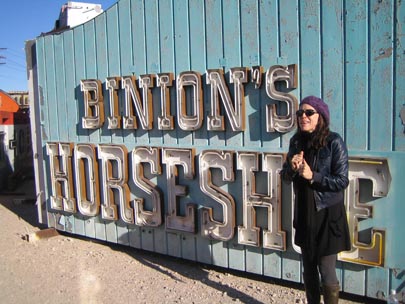 As I had earlier discovered when researching the fantastic architectural history of  Los Angeles, learning and seeking out the architecture of history  is one of the surest ways to find form and pattern in the placeless places of the west. History can never redeem a city in flight from history, but it can make it resonate, making it at once more real and more ideal.