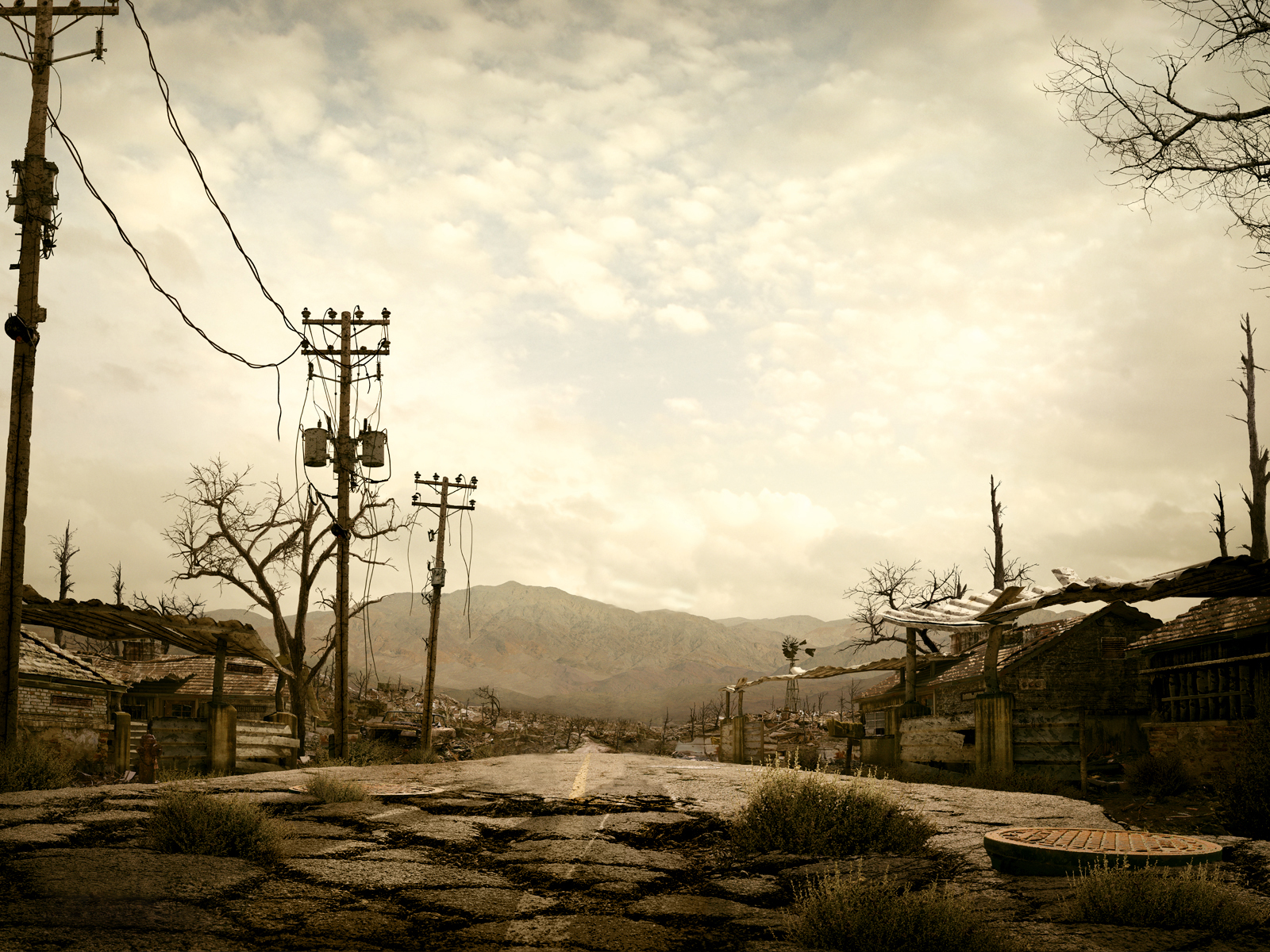 Just finished the latest jaunty little joyride from Cormac McCarthy. The Road is an unnerving tale of a man and his boy scratching their way through the toxic ruins of an America utterly devastated by some unnamed violence on a global scale. I’ve been reading McCarthy for decades, finding in his clipped dialogue and rangy descriptive lines and chiseled Anglo-Saxon verbiage a high tone all too rare—bleak and blessed, at once Biblical and pagan to the bone, but Beckett-like in its truck with the void (although admittedly lacking the funny stuff). I fell off somewhere midways through the Border Trilogy, which seemed a paler horse to his earlier stuff, but there was no sense of disappointment. If the author of the Outer Dark, Suttree, and especially Blood Meridian—that Peckinpah meets Moby Dick sublimity—wants to expand his readership and land some Hollywood deals, more power to him. He can do what he wilt.

The jacket for The Road says that the post-apocalyptic novel is “destined to become Cormac McCarthy’s masterpiece,” which is kinda stupid because he’s already written at least one masterpiece (Blood Meridian). But hey. The timing if not tone of this book its perfect, its blasted world gets under your skin, and the story would make a great movie if Hollywood had balls. The novel is kind of a paradox. On the one hand, it is McCarthy’s most overtly bleak book, utterly hopeless from page one, with only the desperate bond between father and son keeping the winking embers of the human—as opposed to bestial—heart alight. On the other hand, The Road is short and very readable—hell, it’s almost breezy! The writing is about as minimalist as you could possibly expect from a man capable of unrolling hundred-word sentences and peppering them with vocabulary that seems to issue from some nether zone between technical jargon, arcane dictionaries, and utter linguistic fancy. There is lots of spare dialogue between the man and the boy, both of whom remain unnamed, and McCarthy’s descriptions of the blasted heath that the world has become are relatively restrained, at least compared to the cosmic and nightmarish geology lessons of, say, Blood Meridian, or even the Mexico of All the Pretty Horses.

The novel is divided into short epigrammatic sections that are rarely more than a page or two, and sometimes consist of nothing more than a fragmented description like the following:

They trekked out along the crescent sweep of beach, keeping to the firmer sand below the tidewrack. They stood, their clothes flapping softly. Glass floats covered with a gray crust. The bones of seabirds. At the tide line a woven mat of weeds and the ribs of fishes in their millions stretching along the shore as far as the eye could see like an isocline of death. One vast salt sepulcher. Senseless. Senseless.

McCarthy has always had a remarkable gift for resonant similes—comparisons that make scruffy cowboys or tumbledown shacks seem lifted from the engraved illustrations of some early Renaissance apocrypha. Here those bold and looming similes are few and far between. One reason for the relatively spare imagination is that McCarthy has established such an oppressive baseline of actuality that it would almost seem vulgar to poeticize it with fancy stuff, however grim and infernal. In other words, to wax poetic, or prophetic for that matter, would ruin what has been realized here, which is in some sense the ever-present origin of McCarthy’s dark grandiloquence: the end of the world, the bleak, ugly, inconsolable end. This is what McCarthy’s merciless high tone has been pointing to all along. Once we have reached this terminus, though, there is no point in being redundant with too many passages like the following:

He walked out in the gray light and stood and he saw for a brief moment the absolute truth of the world. The cold relentless circling of the intestate earth. Darkness implacable. The blind dogs of the sun in their running. The crushing black vacuum of the universe. And somewhere two hunted animals trembling like groundfoxes in their cover. Borrowed time and borrowed world and borrowed eyes with which to sorrow it.

Scraping the barrel of hope and then chopping up the barrel for the night’s fire, the man and the boy battle the cold and the hunger and the wandering Mad Max packs of bloodcult cannibals and other smelly avatars of evil. There is a lot of stuff about tarps, shopping carts, shoes (or lack thereof), bullets (or lack thereof), and whether or not that banged-up can of peaches has grown toxic. The action lies largely in the repetitious searching homes and boats and storehouses for food and gear, and the occasional harrowing encounter with other human beings. When their rummaging does score—as when they stumble across a well-stocked Y2K-worthy bunker halfway through the novel—the description of the goods that are our daily bread and butter strikes the reader as both heavenly and obscene. But even these temporary satisfactions cannot impede the only real narrative momentum of the book, which is their restless (and sometimes seemingly irrational) commitment to the road, to moving onward, as if only the ghost of promise contained in the act of peregrination could sustain them in their hopelessness.

Of course there have been other postapocalyptic novels, from SF classics like Earth Abides to fantasies like the remarkable Ridley Walker. But this book is now, and it is Cormac McCarthy, so he can drill the implacableness of this possible end deep into your head. If you haven’t already gone apocalypto, you might begin to question the largely unconscious belief that our highly leveraged civilization is going to just keep trucking along. In fact, maybe it’s time to get all geared up, to start thinking about those ten pound sacks of rice and those gas masks. Hell, maybe owning a gun isn’t so bad. And, our time being now, there is a world of products and information and websites to feed your budding survivalist. One of my recent favorites is Aton Edwards’ Preparedness Now!, part of the Process Self-Reliance series. Chapters like “Sanitation and Hygiene” and “Subway Escape” are broken down into Martha Stewart like how-to’s, and they are illustrated with bubbly little cartoons of gear that you don’t own now, look really cool but that you probably won’t bother to acquire, and that one day may be ready to trade your last hoody or your dog for.

McCarthy taps this side of the apocalyptic imagination: the side that responds to concretized scenarios like his with the can-do spirit of end-times boy scouts. The problem with this spirit is that in essence it knows no limits, and leads at its extreme to madness. More to the point, it creates a very peculiar relationship to the future. McCarthy touches on this hidden cost in an exchange that occurs between the man and an old dude he provides with food—pretty much the only act of kindness this kind man extends beyond keeping his son alive and loved. The old man begins:

I knew this was coming
You knew it was coming?
Yeah. This or something like it. I always believed in it.
Did you try to get ready for it?
No. What would you do?
I dont know.
People were always getting ready for tomorrow. I didnt believe in that. Tomorrow wasnt getting ready for them. It didnt even know they were there.

More interesting for this novelist than the spirit of “getting ready” is the spirit of survival itself, and what drives and justifies that spirit in an utterly hopeless world haunted by death or the grimmest levels of life. One missed opportunity in the novel is a flashback to the last conversation between the man and his wife, who believes they should all kill themselves, and who then goes off to do herself in. The dialogue is strangely unmoving, as if she has gone a little mad, and it is oddly shorn of the sorts of tangled existential considerations you might expect a married couple to run through as they face a ruined world where, paradoxically, “nobody wants to be here and nobody wants to leave.” But she decides to leave nonetheless.

After all, in such a world, survival alone is an ambiguous value. Even if one keeps away from the bloodcults, how does one keep from being savage at the end? For the man, survival needs to be something more: it needs “goodness.” McCarthy’s cosmos is amoral, but it is not relativistic. The man keeps reassuring the boy that they are “good people,” and we see what they mean, but a chasm begins to open up between this story and the self-serving and sometimes violently uncaring acts that the man commits. The problem is that, if the man is sustained by the boy, the boy is sustained by the possibility of goodness. But we see no good beyond their caring for one another. Along their hard road, the wanderers meet no struggling anarcho-collectives, no armed but sympathetic hippie survivalists, no weird religionists ministering to those not yet utterly given over to horror. The social fabric of McCarthy’s world is so torn that when an act of gratuitous goodness finally arrives from without, it seems hollow, like a deus ex machina, or a nudge from his agent about Hollywood. It is fascinating to watch McCarthy explore good and evil in a world rendered implacably empty, meaningless, and hostile, but it does not, in the end, ring true, or even good. But perhaps the alternative is simply too devastating to propose.