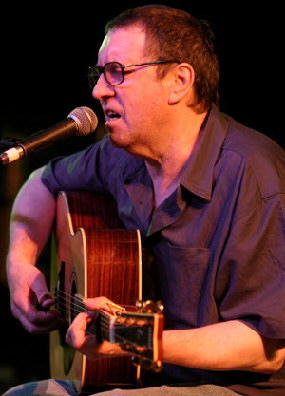 Caught Bert Jansch at the Great American Music Club Wednesday night. The undine and I arrived just on time, but in a foul mood, having had our mutually unpleasant days topped with a $250 citation delivered by overbearing and preachy Berkeley cops for the heinous act of pausing in a bus-stop for the two or three seconds it took for me to get into the vehicle. Hey jerk-offsthanks for the warning! But the sketchy moods melted away like mist on a lazy summer morn as Jansch took the crowd, which included Neil Young, through two hours of originals, covers, and trad. arr.s. The man himself was informal, with casual stage banter and a downhome garb of blue jeans, white sneakers, and whatever shirt. His evident lack of pretence was mirrored in the Scotsman’s singing voice, which is not a good one on anyone’s ledgergruff and quiet and likely to swallow the ends of phrases or just trail off. But unlike, say, Richard Thompson, whose more able voice grows wearisome with the strain of his mordant good humor, Jansch just ambled along, doing what he did, and somehow warmed and amazed the room despite all the great lyrics that never escaped his gullet.

Jansch is a paragon of the understated, which is par for the course with old-school folkies. This informality also extends, remarkably, into his guitar playing, which simultaneously manages to be extraordinary and ordinary. Strong and loose, capable of fancy embroidery but generally content to stick to the already rich grooves, Jansch plays guitar more like a master craftsman than an “artist.” Forty years ago, he was already a wizard, but he never got fancy on us. OK, he did play a mindblowing instrumental piece that twisted and coiled like two snakes making love and closed with a fluttering lick of 16th notes that caused the dude standing next to me to moan “Might as well give up now.” But even then, Jansch wielded his guitar as an instrument of conviviality rather than conquest or enchantmenta peer-to-peer warmth that extended to the songs he played and the stories he told about the folks who taught them to him: Anne Briggs, Incredible String Band’s Clive Palmer, and some sailor lumberjack brute whose name I missed.

“Blackwaterside” was more fumbly than the version in my dreams, and I missed “Needle of Death,” but Jansch really hit his stride when he played the material off his new album The Black Swan I haven’t heard many of his recordings past the early 1970s, but to judge by the scary covers from some of his 90s releases, I suspect the neo-folk revival’s romantic embrace of the old school has done the man good. The album is on Drag City, Joanna Newsom/Devendra Banhart co-recorder/producer Noah Georgeson helped create a nice homey analog feel, and Beth Orton muscles in on just the right number of songs, giving the listener a sweet respite from Jansch’s rough brogue. Mojo gave it five stars, but I’d have to dock it half a star for one dopey protest song”Texas Cowboy Blues”and the unfortunate decision to invite Devendra Banhart to muck up an otherwise gorgeous version of “Katie Cruel” with some hazy, half-offstage backup vocals, and then, as if that wasn’t enough, to end the tune with the kind of rank hippie bongo shit that should be confined to Golden Gate Park. Otherwise The Black Swan is a total treat, almost as soul as the man live. The title track in particular is amazing, as he opens up the dark dreamy underword lurking beneath by the shimmering black water of the brightly struck minor chords. The album also contains a charming old blues, “My Pocket’s Empty,” which Jansch learned from Clive Palmer, back in the day. But the ISB cover of the night was his encore take on Robin Williamson’s “October Song.” While I don’t think that wise and trippy tune was as well-known to the crowd as Jansch assumed, it did not feel like a curio dusted off for the evening: it felt like a torch casually handed to us:

Sometimes I want to murder Time,
Sometimes when my heart’s aching,
But mostly I just stroll along,
The path that he is taking.
>