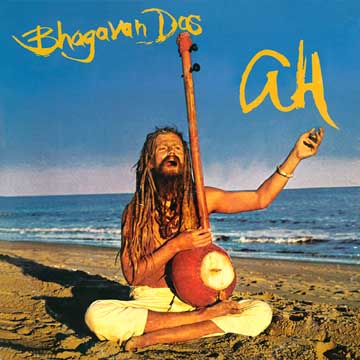 This piece originally ran on Hilobrow as part of the Grok My Enthusiasm! series. Please check out Hilobrow, my favorite culture klatch online!

Bhagavan Das is now the OG dirty grampa of the yoga circuit, a powerful bhajan singer and meditation teacher known for his grizzled white-boy dreadlocks and fully carnal devotion to young women. But Das is best known for becoming one of the first boomer trailblazers of mystic India. Born in Laguna Beach to a family who named him Kermit, Das joined an organized sadhu order after making his way to South Asia in 1965. Then he ditched his formal mendicant robes for rags and skulls, becoming a quasi-ascetic freak who spent half a decade wandering around India. He took initiations from major Buddhist and Hindu teachers, including some heavy-duty tantric transmissions requiring corpses and charnel grounds. In 1967, Das famously introduced Ram Dass — the renegade Harvard LSD researcher then known as Richard Alpert — to the beaming, blanket-wearing god-man Neem Karoli Baba. In his 1971 hippie bestseller Be Here Now (a phrase he lifted from Bhagavan Das), Ram Dass described their encounter, and when the younger man returned from India and released the double-album Ah! in 1972, his star was already blazing. Too erratic to ever cut a believable guru persona, he instead became the groovy rockstar yogi supreme.

Worlds away from the smug pablum served up in today’s yoga studios, Ah! is a transcendent document of a singular California freak simultaneously finding and losing himself (or his mind) as he stumbles his way through one of the world’s great domains of sacred music. The devotional voice, brimming with savor and grace, lies at the heart of Indian music, and certainly of the bhajan: a category of sacred song that encompasses both the repetitive mantras of kirtan and the microtonal raga jams found in classical vocal forms like dhrupad. Backed up by tamboura, a plucked drone, and the occasional conch, Das apes it all, with a feral reverence guaranteed to offend sophisticated listeners and to grate on nearly everyone else.

There are currently four reviews of Ah! on Amazon. Two five-stars praise its sincerity and spiritual passion, while a two-star reviewer complains that he found the disc too hard to meditate to with all the yelps and whimpering going on. The oddest review comes from a former clerk in a record store, who wrote that they regularly used side one to chase shoppers out of the store at closing time. “Try to play it without laughing out loud,” he challenges in his snarky but loving five-star plug. But the real challenge is to hear how all these responses to Bhagavan Das’ masterweird are simultaneously true, just like all those gods we bring forth, and sing forth, from our yearning.