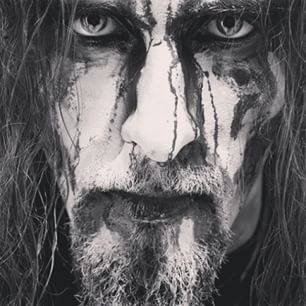 For the last day and a half I’ve had this VBS TV video stuck in my head, and it’s kinda cool and kinda creepy. I’ve been listening to tons of black metal lately, partly for research and partly for passion, and when I saw mention of the documentary True Norwegian Black Metal on a Wikipedia entry, I had to track it down. I haven’t watched any VBS webeos, or whatever you call them, but I like Vice magazine in a yucky way (yuck as in laughs; yuck as in bleechhhhchh) and heard that their online streaming thingee was pretty swell. It makes sense: the mag was always most interesting when its contributors were doing investigative reports in that knowingly crass, but still exuberantly human manner. Hanging out with Sri Chimnoy acolytes and talking with them about their trainers remains a high point.

Too lazy to figure out how to navigate VBS TV’s fake remote interface, I watched True Norwegian Black Metal on YouTube. The five-part, roughly half-hour show focuses on Gaahl, the singer for Gorgoroth, perhaps the most intensely Satanic BM band who continues to keep the infernal flag flying. (Given how excremental this music can be, I like the acronym “BM.”) There were lots of serious Satanist black metallers back in the day, but now most are kinda cartoony, like King Diamond, or Trent Reznor. But not Gorgoroth, named for a fell plateau in Tolkien’s Mordor. Band members Infernus and King ov Hell are both still big fans of Satan, but Gaahl, who really does look scary as all heck in his corpse-paint and spiked wrist-bands, has adopted a more nebulous heathen philosophy whose exact lineaments was one of the objects of Vice’s intrepid documentary crew.

If I’ve gotten you interested at all at this point, you might want to watch the whole thing, but if you are pressed for time just watch the last segment.

But if you are really lazy I’ll just tell you.

After setting the stage with some BM history, the doc crew travel to the remote and chilly valley in the Norwegian hinterlands where Gaahl grew up and where he still lives, in rather primitive and certainly isolated conditions. They drink wine, and Gaahl talks about pantheistic stuff like the God in nature and the God within. Nonetheless, this is one creepy gent. He went to jail twice for two different bouts of beating the crap out of people, one of whom he reportedly tortured in some nasty blood-in-the-chalice fashion. In person he comes off something like a vampirenot a Hollywood vampire, but a real-deal, post-evil sophisticate, sucking down the juice of the vine and painting in his spare time and talking about sheeps and goats and why he hates Christianity.

In the last segment he takes the film crewa Norwegian guy and a couple of yanksfor a walk. They climb higher and higher up a river valley, past a waterfall, and onto the treeless and frozen slopes. The snow falls heavy and the camera gets shaky. One of the producers is wearing Nike trainers with plastic baggies around his feet, and he starts getting really winded and panicky. Things start feeling very Blair Witch Project. The posse finally arrive at a simple rustic cabin, which Gaahl’s grandfather built after hauling up each piece of wood. It’s touching, but also terrifying. Seeing this frozen, isolated place, I feel small and soft, and certainly smaller and softer than Gaahl, who, by the way, has really striking cheekbones.

Back at the ghost ranch, a fellow in the crew ask Gaahl what it is like to be one of mankind’s elite. Gaahl is disgusted; they have not understood him at all. “Guide me” the guy says. Gaahl looks to the side, as if to contemplate the question, and keeps staring, unmoving, for well over two minutes. You think the video is frozen. Then his eyes bug out a bit, as if whatever spectral thing he has been silently conversing with has told or shown him something that finally, truly, freaks him out. Back from his trance, he gives the crew a strange look that is both arrogant and a bit sheepish, and then he takes more wine from his enormous wineglass. Cut.