Erik Davis
Subcultures
• 13 years ago
publish
Check it out 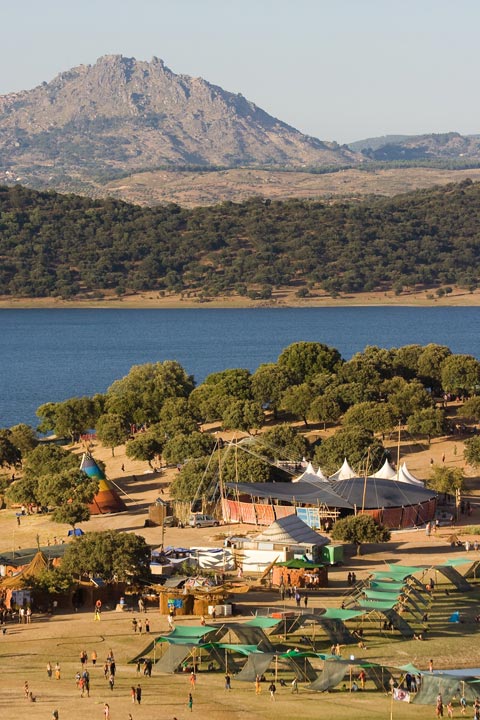 Idanha-a-Nova, Portugal—This year’s Boom festival compelled at least 25,000 people to make the long trek to a hot and dusty corner of Portugal near the Spanish border, where they decamped along the shores of a large lake whose presence mitigated the ferocity of the sun and the sear environs. The bi-annual festival has been running for over a decade, and it has long been recognized as one of the more underground and intentional of the larger festivals devoted to psytrance—that intensely trippy electronic dance genre whose ferocious metronomic beat sends dancers surging and stomping through interdimensional portals fringed with swirling sonic filigrees and creepy “lurker at the threshold” samples. As befits the mind-melting aspirations of this potent and popular subgenre, Boom’s dominant subcultural tone is neotribal: a rave-inflected millennial florescence of hippie shit like long hair, dreads, feral fashion exotica, chai shops, massage booths, copious cannabis consumption, and paganish New Age tantric mysticism.

I gave a talk at the Liminal Village, one of half a dozen various stages and sound systems that defined the cultural ecology of the festival. A large tent surrounded by delightful gardens and bamboo temples that had been created in the weeks running up to the festival, the Liminal Village did the important work of injecting discourse, practices, workshops, discussions, and images—through both a visionary art gallery and a film series—into the festival environment. This learning center takes advantage of the fact that outdoor festivals are liminal zones, in-betwixt and in-between. With their peculiar blend of hedonic utopia and aimless refugee camp, the festival creates a space-time warp that allows people to glimpse new possibilities, to receive new map points, to reformat their expectations of themselves, and of the slippery dream of reality as well. 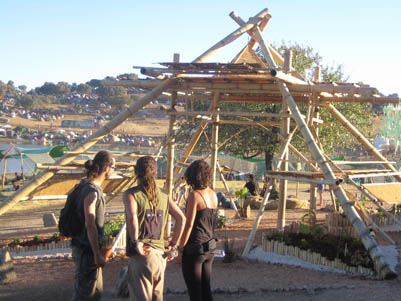 The Liminal Village formalized this process, advancing global countercultural concepts, practices, and politics in a subcultural space that is geared to the experience and desires of hundreds of thousands of predominantly young people around the planet.  Much of this material was too woo for my tastes, with too much fuzzy talk of “the coming shift” and the “emerging culture” (as my friend Zariat pointed out, culture is always emerging). The calendrical fetish of 2012—the shamanic Y2K that even wacky Christian end-times preachers are now starting to invoke—reared its literalist head. At the same, though, I believe we need to work with the meta-consciousness implied by these urgent and millennialist memes, and was happy to lend my voice on a talk about the origins and character of apocalypse consciousness that remained, as far as I know, unrecorded (doh!). The basic message? Wake up and dream. 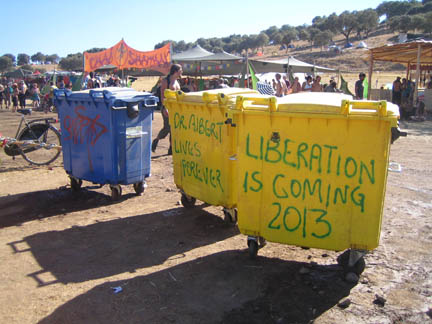 I am not a big psytrance fan, and found the main stage this year even less dance-inducing than usual, thought that may have been due to a decision to restrict my psychoactive diet (almost) to hash spliffs and caffeine. Properly off your face, and especially with eyes closed, the electronic precision and charka tweaking techniques of a good psytrance set can rewire a psychedelicized nervous system as powerfully as, say, a fat balloon of nitrous oxide—and for a much longer stretch of time. But I find it all too insistent, machinic, and alienating, perhaps because my trance dance body was shaped by the far more organic slop of the Grateful Dead. Boom provided some of that live band energy with the Sacred Fire stage, though every time I swung by, it just sounded like dorky world fusion. I preferred the Groovy Beach stage, which a wide range of electronic booty music ranging from stanky breaks to dubstep to minimal techno laced with Boards-of-Canada melancholy, as well as some impressively dreadful pop cheese to boot. My favorite set, from a DJ whose name I was too time-damaged to ever track down, was devoted to witty and sinuous tech funk, a playfully polyrhythmic splice of techno, electro, and breaks that resurrected some old school disco moves—including the deeply charming handclap—in a spirit not so much of irony as innocent exuberance. 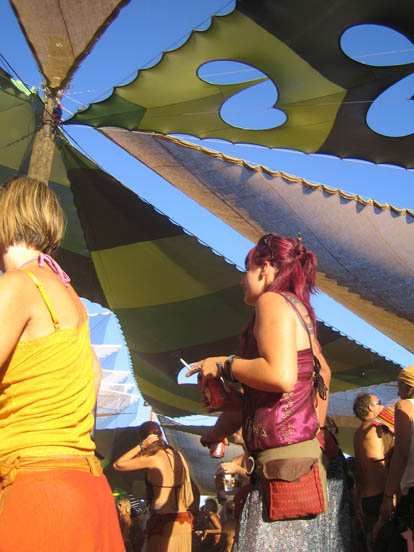 Boom features a lot of visible consumerism. Attendees were confronted with a long line of reasonably good food-stalls, dozens of vendors providing the latest twists and turns of neotribal fashion’s feral mutations, and lots of beer stands. Given that Burning Man is just around the bend, I could not resist noting how much the alternative mall undercut the self- and clan-reliance that makes playaspace feel so much farther away from conventional reality. Though Burning Man encourages its own breed of mindlessness, and though vending allows many travelers to escape the empire of conventional work, a lot of Boom attendees were clearly coasting on the usual urban logic of consumption and distraction.

Perhaps this explains the depressing fact that there was litter everywhere, a pervasive and ugly webwork of crap that undermined the rhetoric and practice of environmental awareness that otherwise sets the Boom apart from most corporate festivals. The festival organizers provided compost toilets, recycling stations, and generators powered with veggie oil recycled from the previous festival. There were problems of course—the compost toilets were unclean, a nasty bug attacked many a GI tract, while other low impact strategies seemed to  have principally reflected a need to cut costs. Still, the Boom folks were clearly set on making a difference. But the trash skeins of beer cans, plastic water bottles, cigarette butts and other moop—which the far larger and more chaotic Burning Man manages to largely avoid—reflected how much work it takes to draw festival-goers out of engrained and thoughtless behaviors.

There were a few other obvious differences from the West Coast freak festivals I know best. On the plus side, there was hardly any visible police presence, and, given that the consumption of drugs has been effectively decriminalized in Portugal, this made for the refreshingly free and open consumption of cannabis. On the other hand—and somewhat surprisingly—the crowd seemed a bit more uptight with their bodies and physical display. The freak costumes were more generic, there was less body modification, and there was nary an exposed bosom or hairy ass to be found, even though hundreds of people were swimming in the lake every hot afternoon. I got the sense that young Europeans were more distant from their hippie forebears than we are in the West Coast. 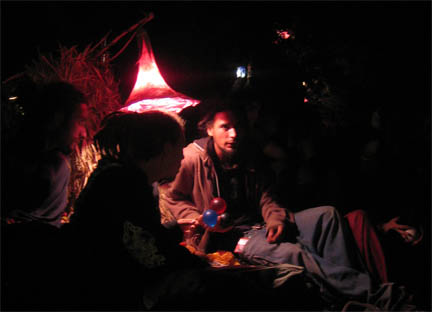 Of course, Europe has exceptional performers, and hoopers, jugglers, and fire dancers all performed at the Theatroom, a large stage devoted to alternative performance arts. There were also a number of interactive art pieces and inventive, low-cost structures, many created from recycled materials. Near the Liminal Village stood one flower-shaped device around twelve feet high, which my pal Spoon dubbed the “trance machine.” Cords attached to each of its “petals” could be yanked on, triggering a single track that the collective crowd of cord-yankers could mix into a thumping tune.

Next door was a long, low-slung tent that concealed the Kaleidoscopic Creature, a theatrical experience which I had caught the previous year at the UK’s notoriously muddy Glade festival. After entering and sitting down at one end of the tent, the small audience is treated to an interdimensional rocket-ride produced by a ingenious and decidedly analog blend of mirrors and puppetry. Despite (or because of) the low tech, the Creature conjures up more cosmic awe, organic metamorphosis, and mythopoetic sentience than any festival art I have ever seen. A big fat gold star to the French crew.

Given that Boom is essentially a week-long trip-party for young people, I was most interested in checking out how different crews with somewhat different agendas created cultural spaces and cognitive feedback loops designed to raise and clarify the consciousness, intentionality, and environmental awareness of these budding hedonists. The Liminal Village and the Healing Center did this through talks and workshops and films, while the harm reduction crew who staffed Cosmic Care created a safe space staffed with experienced crisis managers able to care for most of the psychoactive casualties without calling in the heavy guns. Free publications and a variety of gardens introduced attendees to the philosophy and practice of permaculture, hopefully focusing the often nebulous rhetoric about “planetary consciousness” into practical expressions. But as the litter proved, there is still a large gap between attendees who are tuned into these intentional processes and the ones who are there to party and feel no compulsion to open their ears to the good news/very bad news that in-your-face environmental consciousness demands. Again I thought of Burning Man, which, for all the faults and fuck-ups and toxic trash, does a great job of inculcating a basic ethic of personal responsibility, and at the very least programs people to pick up their trash.

The most bid for sanity in the swirling dynamics of the Boom was a drug-testing unit set up by Energy Control, a dynamite Spanish harm reduction crew centered in Barcelona. Inside a teepee at the edge of a spit of land, where a somewhat dodgy bridge made of empty metal barrels led to the Sacred Fire stage and yet another healing center, Energy Control set up a simple and inexpensive thin layer chromatography lab. Using only a very small amount of materials dropped off by attendees, Energy Control could set brand claims against chemical reality. Tiny red stars sold as mescaline (an impossibility given the weight of an effective mescaline dose) were revealed to be LSD, while a lot of the Ecstasy sold featured mixtures of caffeine and other bunk rather than MDMA. As an advisory board member for Erowid—which had a booth alongside Energy Control—I was tickled pink with this direct injection of rational data into the psychoactive feedback loops of desire and consumption that characterize this offline, down-and-dirty festival. Look for an extensive interview with the Energy Control crew in the next edition of Erowid Extracts. 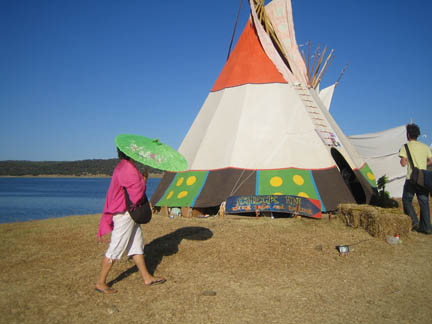 Finally, all this talk of drugs would be incomplete if I did not relate an experience I had with a substance that came my way through the happenstance that festivals breed—what the visionary artist Luke Brown called “syncronnections.” Changa is a DMT-containing smoking mixture developed in Australia that is being touted, with fair reason, as “smokable ayahuasca.” Unlike freebase DMT, changa is a dried plant mixture containing crushed leaves from the ayahuasca vine Banisteriopsis Caapi, along with other herbs, which were not identified on the colorful sticker of my plastic baggy but that sometimes include the Mexican dream herb Calea Zacatechichi and the South American Justicia Pectoralis. A solution of DMT is then most likely enfused into this smoking mixture. As with the ayahuasca brew, the vine provides the MAO inhibitor that modifies and extends the sometimes beautiful and always bizarre flash of DMT, which, given changa’s Oz origins, is most likely sourced from acacia.

Along with a friend, I said hello to changa on the last night of the festival. We sat on a small hill facing away from the sound systems and towards the lake, where the bulbous moon—which had been almost entirely eclipsed the night before—glittered on the water like a quicksilver mist. In the distance glowed the lights of a medieval mountain town with the somewhat ominous name of Monsanto. The smoke was sweet, and the entrance into the vestibule of the tryptamine palace was smooth but strong, and I slid gently along DMT’s inside-outside Mobius strips of sentient energy with more clarity and with less anxiety than usual. My fingers folded into spontaneous mudras and the breath of fire sparked without will. Then the vibrating weave of nature’s alien mind fluttered and unfolded us and set us gently back on the scraggly hillside, where the crickets and their ambient chirp-track trumped the distant thump of machines. Boom!