Erik Davis
Subcultures
• 11 years ago
publish
Check it out

Temples and Portals and Bloody Maries 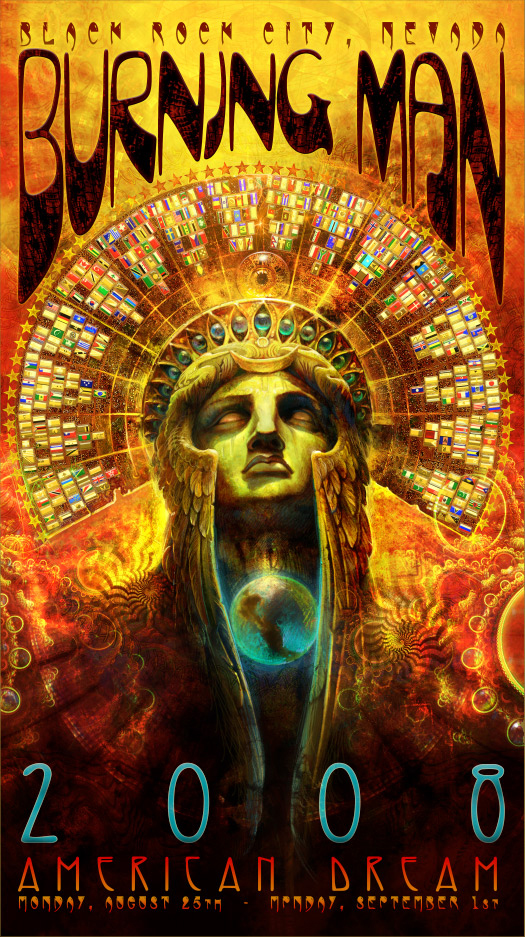 BLACK ROCK CITY, NV.  This year was my—cough—twelfth Burning Man, and my time there was, for once, dominated by continuity rather than novelty. With some important exceptions, I was drawn less to plunge into new experiences than to enjoy and re-affirm the people and places that already had a claim on my heart and my imagination. My most transformative and exquisite moments nearly all took place with people and within confines I was basically familiar with—which is another way of saying that, for me anyway, the playa has become less like an undiscovered Wonderland and more like the Jersey shore. I’m not jaded mind you—just relaxed.

So I apologize for the hamstrung nature of my reportage. I spent little time outside the city grid, and therefore saw a small and mostly underwhelming portion of the large-scale art installations. I didn’t step foot in center camp, and didn’t visit the man. I mostly bounced about on aimless syncronnections, running into old friends and party-mates and the too occasional blasts of good music. The lion’s share of my pals on the playa—folks with Pod Cluster, Entheon, Shift, Tsunami, and the temple crew—were camped within a few blocks radius, making mid-day visits for lemonade, smokes, and foot washing easy as pie. I fell in love with an enormous umbrella that blocked the pitiless sun. My greatest psychoactive discovery was how tasty and nourishing a Bloody Mary can be out there.

I was not alone in my diminished enthusiasm for the hunt for marvels. Many folks spoke about the fatigue and relative lack of mania evident throughout the week, and especially on burn night, after an afternoon-long dust storm sapped people’s energy and sent a surprisingly hefty number of wussies home. I also suspect the gumption drain can be laid at the feet of the bloated city plan—which widened the open playa space—and the consternating condition of the salt flat itself, whose sand dunes and ruts made walking and especially riding your bike a more tiresome exercise than usual. If there was a theme for the year’s event, it was “go local.” Lots of folks I knew focused their explorations in their immediate neighborhoods, and forewent their bikes for their feet. (Which is OK by me – just as real urban dwellers need to get out of their cars and onto their bikes, burners would do well to ditch the bikes sometimes and just hoof it.)

As always, I was keen on experiencing the temple, which this year was named “Basura Sagrada” or “sacred trash.” With David Best and his crew bowing out for the year, I was intrigued to see what a new crew would do to carry forward what has become Burning Man’s most spiritually significant feature—a zone of real transformation that has to date avoided the New Age clichés that mars so many “temples” on the playa. Having already seen some of Shrine’s marvelous driftwood chapels at various neotribal gatherings, I was not surprised that the artist, working with his partner TukTuk, managed to both honor the Best legacy and take that tradition of sacred junk in a new, more accessible and interactive direction. 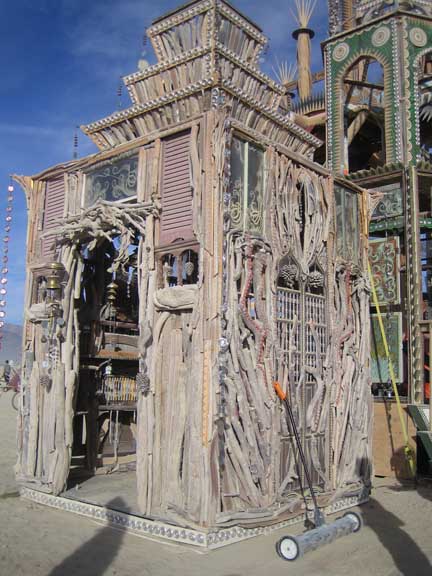 The temple was not flawless. While the hard-scrabble detritus detailing was marvelous, and the smaller chapels that flanked the main building sublime, I was disappointed with the boxy, amorphous quality of the larger structure, especially when seen from afar during the day. It stirred none of the somber exoticism of the temples of yore, that organic atmosphere that helped define the temple as a space apart from the usual rowdy bacchanal. While the various altars and surfaces inside the temple afforded burners great opportunities to transform the space with their memories and wishes, and the cheap materials communicated Burning Man’s alchemical dream of transforming trash into wonder, the stairwell that gave access to an upper platform undermined the otherworldliness of the space, making it feel a bit more like other installations on the playa. That said, the thing looked like a moody, Swiss Family mausoleum at night, creating an environment that fostered quiet chats and solo contemplation. 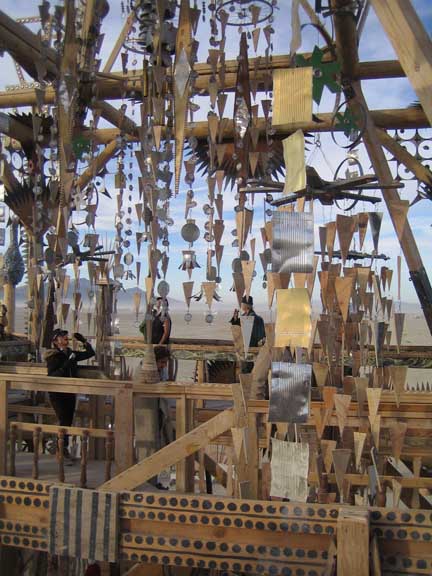 I presented one talk about waking and dreaming at Shift camp, which was decorated with Jason Tucker’s marvelously crafted entheo-entity pillars. (Look for the podcast soon.) But my most substantial contribution to the event was performing the official wedding of two great friends of mine, the ace Christopher Fülling and the lovely Betsy McCall. I am a minister in good standing of the Universal Life Church, and gaining that status was the best 45 seconds I’ve ever spent on the Internet.  Performing weddings is one of the few performances you can do that actually change something in the world, an act of socially sanctioned “real magic” that offers the additional challenge of leading a joyous and sacred ritual that, if it is to be truly effective for the sorts of folks I perform these for, must avoid the gaudy sentimentality and religious treacle that mars most such binding ceremonies in our benighted larger culture.

Back in the day, Christopher directed a number of the Pepe Ozan operas, and with Betsy he is now pursuing the mad dream of creating an art monastery in Italy, where they are in the process of taking over an empty convent and converting it into a production retreat for artists, poets, musicians, and scholars. For a number of the Ozan operas, Christopher spearheaded the development of a rich mythology that structured the esoteric initations that lay behind the “exoteric” opera performances. Thursday’s morning wedding ceremony drew its substance from the Atlantean mythos developed for two of the later operas, and that Christopher based on his elaboration of occult and classical texts devoted to Atlantis. The attending women came dressed in the red and gold of the sunsnakes, while the men were garbed, far less consistently, in the blue of the moonbulls. As one of the attending Pleiadean priests, I dressed in black and green, which meant that I outfitted Zen robes with a monkey skull necklace and a green serpent headdress I bought a few years ago in Burma. During the service, I invoked the principles of pure love, balance, and the divine hermaphrodite. After the bride and groom exchanged necklaces, I offered them each a goblet brimming with a salty but ambrosial nectar. 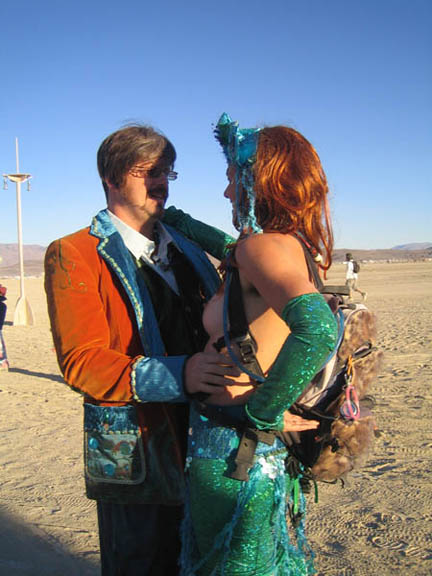 It was a great morning, but my personal peak for the week occurred the first morning I was on the playa. The night before, after a seven hour trip from San Francisco, I ran into a pal alongside Christian Ristow’s amazing Hand of Man, an immense, metal-crushing Marvel-worthy robot hand that participants could manipulate after donning a simple glove. My friend told me that our mutual buddy Harlan Gruber would be blessing the opening of his Sapphire Portal the next dawn. I have written about Harlan’s work before, as he remains one of my favorite Burning Man installation artists, despite the fact that the Art Jury somehow sees fit not to support his work.

The Sapphire Portal is a minimalist jewel: a circular wall that encloses a carpeted surface and a central geometrical sculpture. This consists of a half dodecahedron housing the Quasar Wave Transducer, an ingenious analog sound device that produces a resonating, constantly shifting electronic Om. The dodecahedron is shaded by a half icosidodecahedron steel frame covered in stainless steel mirror triangles, which is in turn encased by a half icosahedron steel frame. These shapes are all drawn from some New Age world-bridging lore that Harlan groks and I do not, but the cosmic serenity of this excellent place, whose walls and carpet are a cool sky blue, is readily experienced by all visitors. Resting against the gently sloped walls, bathed in the wobbling bath of the wave generator, the Sapphire Portal functions like one of James Turrell’s sky windows, shutting off the glittering wackiness of Black Rock City’s horizon line and framing the shifting sky above. Nature art: within you, without you. 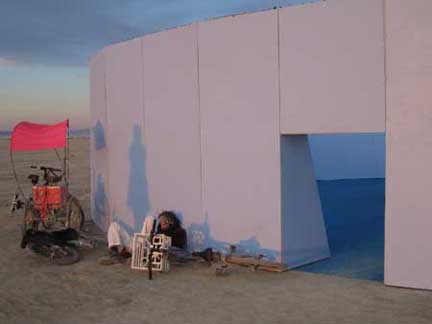 The Sapphire Portal was my favorite installation of 2007, and I wanted to honor my pal’s hard work. So I crashed early and set my alarm for 5 am. I got out there well before dawn, and since the crew had not yet arrived, I sat on the carpet before the east-facing door to watch the sunrise. Sitting there, with only a modest load of cannabis in my system, my mind unfolded like a waking flower, as my consciousness was treated to a half hour of mild wisdom-dappled mystic bliss that resembled the contemplative come-down from a heavy psychedelic journey. Half-meditating, I slowed my perceptions to follow the glacially shifting cloudscape of pink and orange. I melted into this honey-like pace, merging with the deeper pace of change that Henri Bergson calls duration: a substantial becoming rather than a surface modification, the very pulse-flow of the Tao.

Fifteen degrees or so above the horizon, the thin beaming sliver of a waning crescent moon hovered over the not-yet-revealed sun. Taking this in, I realized the admittedly banal fact that when we gaze on the crescent moon, we are looking at the backside of the orb, its back on us to face the source of light. Watching this near conjunction, it is like peaking through a window on lovers lost to us. With next morning’s unscripted wedding on my mind, I recalled the fact that, while our culture codes the moon as female and the sun as male, these genders could be reversed, as they are in Japanese Shinto and, indeed, the Atlantean mythos. The supple dynamics of this cosmic gender-swap charged the sweet sky with potency, with the sun and moon providing the polarity that drove the horizon’s brimming, candy-colored transformation.

At that moment I had the sort of New Age psycho-spiritual download that comes very rarely to the rather critical me. As I had come out alone to Burning Man this year, without my longtime sweety to ground me out, the gifts and hazards of solitude were on my mind. Of late I have been growing into a deeper self-confidence, an acceptance of the fact that on some level we are alone in our rambling sluice of spacetime. Rather than hope that the world will somehow save us, I have grown to see that a proper self-reliance reduces anxiety, fear, and neediness, especially in the midst of stressful outer or inner conditions. Nestled within Harlan’s portal, I realized that this sense of self-reliance could be imagined as a small geometric shape suspended in your gut, an imaginal pattern that concentrates one’s essence—or rather, a crystallization of the inner life into the essence that Gurdjieff said was made and not born. 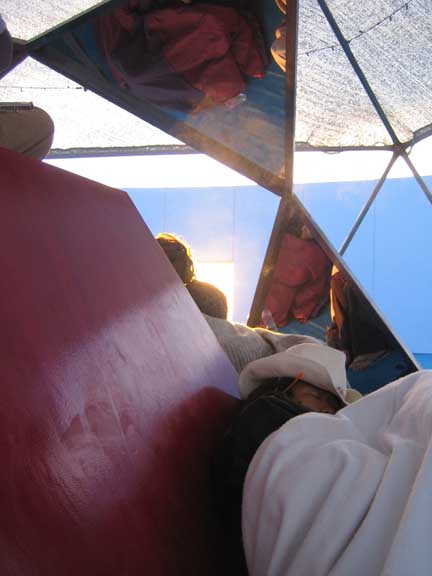 I glanced at an art car parked nearby, and saw with a synchronistic shock that its prow was decorated with two interlocking pyramids forming a three-dimensional Star of David. I had been toying with precisely this arrangement in my magickal meditations of late, and now it slipped into my consciousness like a blueprint of a spirit-ship, like the merkabah described in ancient Jewish mystical texts or in the New Age books than inspired Harlan to build the Sapphire Portal in the first place—a portal that was clearly working its effects on the lonely gazer upon the dawn that was I. Inner resonated with outer, cosmic with human patterns, and all in the service of a deeper craft of spirit, what Robert Duncan called “a vehicle / of water within the water,” or what Miller in Repo Man called the “lattice o’ coincidence that lays on top o’ everything.” The lattice was realized when Harlan showed up with Jimmy Whiz and the portal crew, and we greeted the dawn with sage smoke and overtone chanting and the spontaneity that emerges from the hard work of structuring, with the lines of light and geometric shape, the glorious and empty waste in which we dwell. 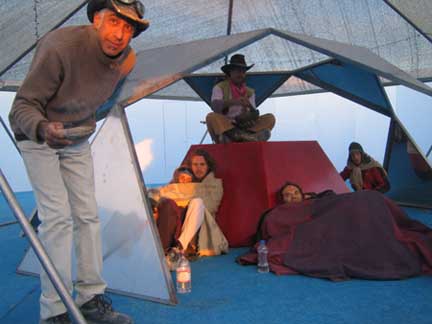