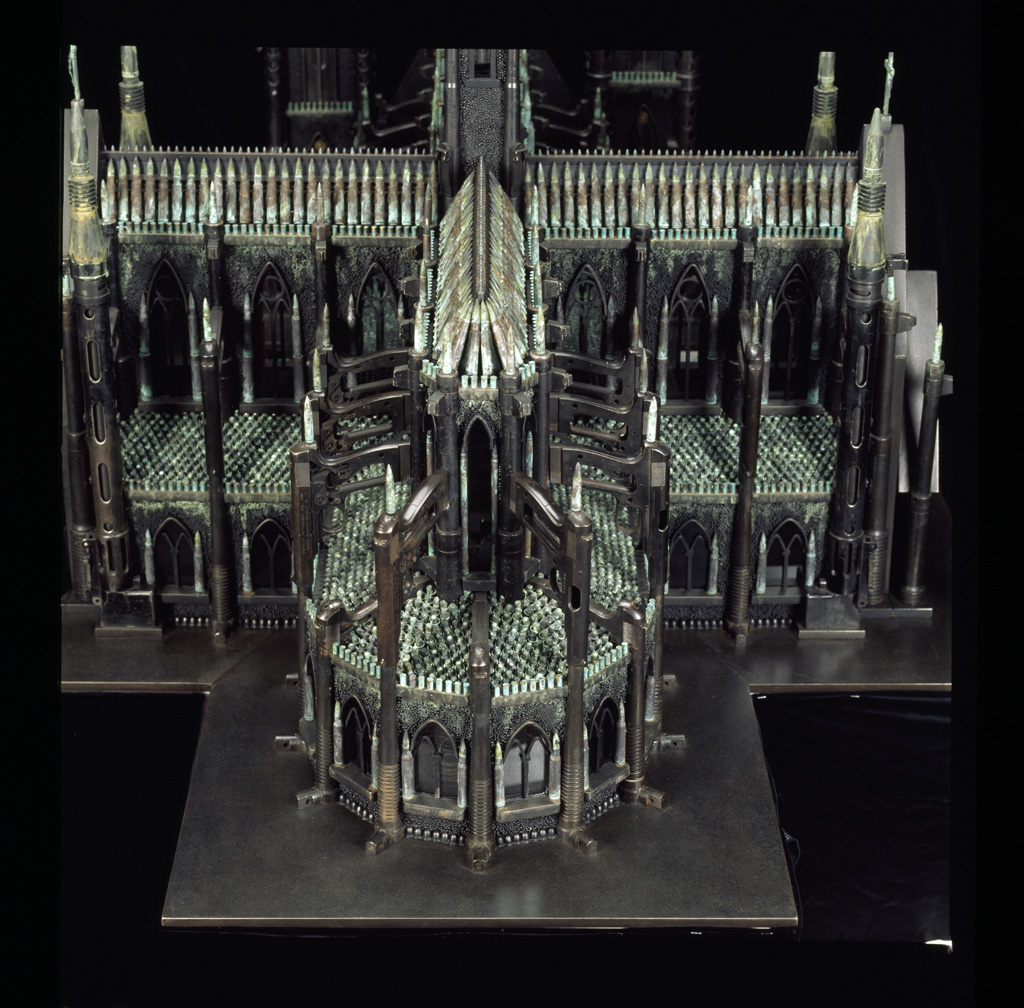 I went to the de Young museum with my Mom last weekend. We enjoyed the proto-Op Art tripster quilts of the Amish, as well as a fine collection of classic photography shots (best was some 1920s of an evil looking puppet conjoined to the phrase: The Return of Christmas). The most mind-blowing thing by far though was a large dollhouse-scaled cathedral built by the artist Al Farrow out of AK-47s, bullets and shells. (See link above.) I spent ten minutes looking at this brilliant deployment of found materials before even bothering to read the artist statement, which immediately starting talking about–you guessed it–the connection between organized religion and organized violence. No kidding! The crusades were mentioned, even though the Crusaders were noticably deprived of semi-automatic firearms.

If the piece hadn’t been so cool, I might have spent more than two seconds contemplating the stupidity of curatorial statements, which often seem like elaborate, round-about, and snotty way of stating the obvious, although at least in this case something, rather than nothing, was being stated at all. But it was the radness of the piece, in contrast to these earnest and now rather banal observations, that made me start. Farrow’s cathedral was ingenius and beautiful! And it was beautiful not just because the forms of the Gothic are beautiful, but because of a darker secret: guns are beautiful.

I am not a gun nut. I don’t own one, though I vaguely want some, and have certainly enjoyed shooting them — at ranges, at tin cans, at the stars from Black Rock desert back in the day. But one of the things that strikes me even about relatively utilitarian guns is how delicious they are as machines: there compelling handiness, the lines and curves, the compact and even “minimalist” organization of forces. With Fallow’s piece, it takes a moment to get the gag, and far more moments to realize how intricately he exploited weaponry for his simulacrum.  That’s not because he disguised the bullets or casings or triggers, but because their curving lines, circles, angles and heft possess the same sort of weird, quasi-abstract organicism that Gothic cathedrals possess. (Check out some of his reliquaries at: http://alfarrow.com/reliquaries/)

Here was the real message of Farrow’s piece, which runs almost counterpoint to the PC boilerplate of the appended statement. Just as secular or even atheist art lovers routinely recognize the beauty of Christian art, so must we recognize the beauty, or at least fetishistic fascination, of the gun. But even deeper–or less deep–than this is the recognition that “messages” are dumb in art, or at least a lot of art. If Farrow’s cathedral was about his message, its appeal would not last before the initial a-ha moment that emerges from the juxtaposition of medieval Christian form and modern firearms. But instead, that a-ha is just the somewhat predictable portal into an aesthetic and mechanical encounter with flows and forces that is not so easily recouped by didactic gotchyas. Certainly this admiring comes with qualms, which I suppose was part of the point. But the specific qualms melted in the face of work so crafty and detailed it could only have been executed with love.

And there’s the rub.