The art of Patrick Turk 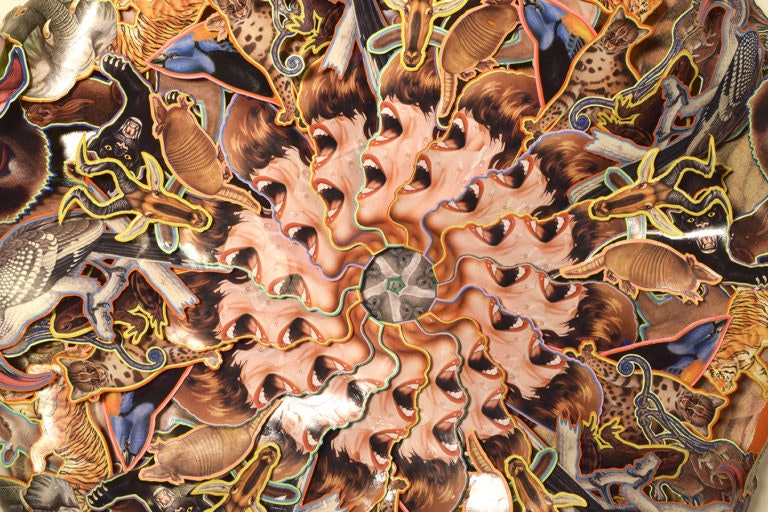 This is a brief catalog essay for the show Patrick Turk: Higher Planes, which wound up being held mostly virtually at the Art Museum of Southeast Texas, February through September 2020

Over the last decade, a so-called “psychedelic renaissance” has taken hold of the developed world. Clinical research into drugs like LSD and psilocybin is booming, ayahuasca jungle tourism is mainstream, corporations are patenting psychoactive formulations, and efforts to legalize visionary plants are popping up faster than mushrooms after rain.

But renaissances are about art as much as anything, and so far this one has left a crucial question unasked: “What is the relationship between psychedelics and contemporary art?” We need a frank assessment of drugs and creative expression that reaches beyond the boundaries of a self- conscious and marginal “psychedelic culture.” One thing should be clear: there is a crucial difference between psychedelic art—generally illustrative, often subcultural, and frequently generic—and the psychedelic artist: those mavericks inspired by the phenomenology of altered states to formally intervene into the problems, and possibilities, of the amplified image.

Patrick Turk is a psychedelic artist. For over two decades, he has produced installations, objects, and images that expand the range of paper collage even as they expand the minds of viewers. Some of these works, to be sure, are knowing riffs on the trashy excesses of drug culture. In his 2017-2018 installation Trip Harder…Go Farther (which is not included in Higher Planes and has appeared under different titles), a freaky figure that Turk calls “Uncle Roscoe” is melting down in his basement recliner, blowing his mind with black-light pictures hung on the walls. These images brilliantly remix the styles and icons of classic psychedelic posters from the 60s and 70s. But through lighting tricks, excessive repetition, odd angles, and other visual distortions, Turk warps both Roscoe and the posters beyond these now familiar reference points.

Elsewhere, Turk steps fully into his own unique phantasmagoric domain. In The Superorganism from 2012, he presents the viewer with mandalas, strange creatures, and biological cosmograms that depict mutant metamorphoses of animal, human, plant, and god. These seething artifacts extend Turk’s earlier work with 2D collages, which jigsaw together a myriad of image fragments, sometimes in multiple dozens of copies that Turk painstakingly extracts from books and other paper sources. Turk’s sculptural turn beyond the flat page began with his breathtaking Time Travel Research Institute Presents: Patrick Turk series from 2010- 2011, in which the artist shaped and bent collaged surfaces into 3D dioramas tucked behind vitrines peppered with magnifying lenses. These perceptual tools encouraged the viewer to fall into the twisted details, actively distorting their own impressions of Turk’s already distorted takes on space and history. 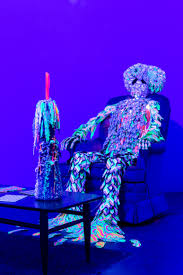 Without losing his connection to the primal language of collage, with its ironic juxtapositions and layers, Turk’s sculptural experiments with paper and glue have birthed complex assemblages that work, and delight, on multiple levels. While the specific images that Turk constructs still veer towards the hallucinogenic, the formal and abstract qualities of psychedelic experience are as important to his work as archetypal content. One of the key formal elements is the tension between the dense totality of the overall piece, with its psychedelic horror vacui, and the specific call of precise details, whose sharp articulations can capture and obsess the gaze. From out of a larger pattern, we are called to pay close attention to tiny elements that in turn pull the rug out from under our holistic seeing. The very search for the concrete submits to a deeper distortion.

This oscillation is also mirrored in the flickering emotions that can arise in the face of Turk’s work, which throw off impressions of beauty and nightmare, seductive life and repulsive obscenity, the marvelous and the monstrous. This deep ambivalence represents mature psychedelic vision. Turk’s assemblages and artifacts compel, but we don’t really know what to do with them or where to put them. Like the carapaces of unknown sea creatures or dark jewels cut into alien shapes, they attract, but remain unassimilable. 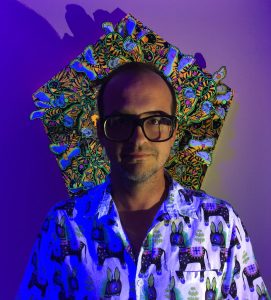