Put that in yr cumhorn and smoke it! 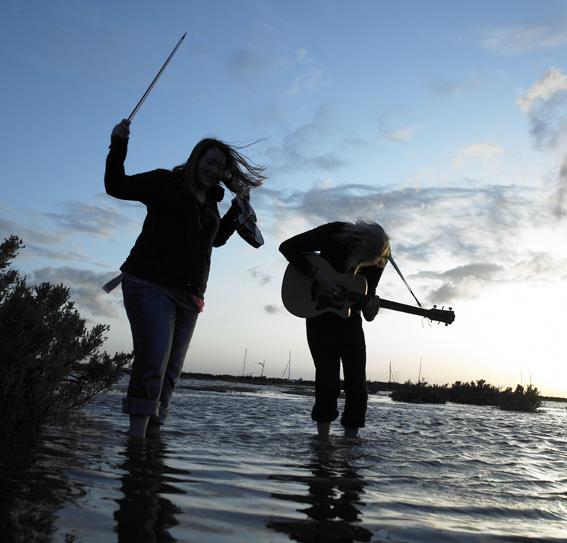 I first got wind of the feisty sorta early music duo Horses Brawl on emusic, which is my favorite of the new-fangled MP3 music delivery systems. Admittedly I have yet to try Rhapsody, but I doubt I’ll really be able to make the shift from recordings as possessions to recordings as ether-streams siphoned from the data cloud. I like emusic because the interface is pretty swell, the paid reviewers are solid, and my friend Evan is really obsessive and has good taste and sends me recommendations all the time. There’s also a decent amount of classical music and some pretty informed (and unpretentious) classical geeks. I mostly download the classical music.

, and so I sampled and bit. The group, which hails from the rural fenlands of East Anglia, is one of the more unclassifiable acts I’ve stumbled across recently. It’s like early music performed in some punk club in, I dunno, Serbia. Baroque tunes and medieval peasant stomps are cut with Balkan filigrees and modern folk guitar stylings, set to ferocious and sometimes mournful rhythms, and played with urgency and tang. So yes, the woman, Laura Cannell, does play  cumhorns and recorders, and if that’s your cut-off for twee I guess I understand. But her recorders are double barreled, like shotguns, and they sound like ’em. The first song on the album is called “Mofo.”

, the group’s 2007 outing, which was much less fun to procure. Emusic didn’t carry it, the lumpen rabble at Soulseek could not help, and Amazon was charging over forty bucks for an import copy. Finally I bought an Mp3 download copy from CD Baby for eighteen bucks, which is more than I pay for most vinyl, but I was feeling antsy that day and so didn’t even order the CD, which, ridiculously, cost the same amount of money as the MP3s.

But I’ll stop whinging, because Dindirin is an extraordinary disc, and warrants all the UK buzz it’s apparently gotten. Even more than its predecessor, the album rasps. Ye olde melodies are subjected to gritty timbres and impulsive performative presence: the sweetly rough gestures of physical beings wielding physical instruments whose full range of sounds, far from being frozen in reconstructive amber, remains live and untapped. The slow aching melody of “Bibit,” which is based on a drunken monk’s song from the Carmina Burana, is drawn out of Cannell’s fiddle in scratchy woozy saws, while “Fawrhoro” recalls the rattling, percussive shimmer of West African griot music. The opening “Passim Estampie,” a 13th century Welsh/Bulgarian hybrid, begins with some distorted recorder blasts, followed by the buzzing grumble of a string on Adrian Lever’s guitar, a string tuned absurdly low. And that’s the least of the duo’s tricks. In performance, Cannell also hits the strings of a cello with a tin and wraps a bow around her fiddle, while Lever attacks his steel string with a double bass bow. All these bright and edgy textures add bite to the tunes, but also adds flare to gigs, making them sound now. Even the old school can raise a ruckus.