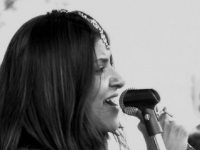 Probably the first rocker to embrace South Asian sounds in public was George Harrison, who discovered the sitar on the set of Help!, added the instrument’s resonant timbres to “Norwegian Wood,” and famously went Krishna on the second side of Sgt. Peppers. But the first cat in London to have a sitar was actually Jimmy Page. Although he couldn’t play the instrument very well (neither could George), Page’s dabbling suggests to my hopelessly romantic Orientalist mind a lost world of Hindu hard rock, a vein of kundalini metal that Zep approached in the immortal “Kashmir” but which has hardly solidified into anything like a subgenre. When I was in India in the early 90s, I did snatch up a few metal tapes from bands like Agni and the like. They were OK, and I am sure there is some ace stuff I have not and will never hear. But though Indian-influenced music has now become ubiquitous in our global soundpool—the soundtrack of yoga classes and bhangra-hip-hop hoe-downs and “Slumdog Millionaire”—it is very rarely hard.

Which is why my ears got all melty the first time I heard “Kismet,” the astounding opening track on the new album by Manooghi Hi, a South Asian / West Coast rock assemblage manned by Seattle stalwarts and fronted by a gorgeous, successful and somewhat unconventional Bombay pop singer named Mehnaz. (Full disclosure: keyboardist Mark Nichols is a pal and collaborator.) “Kismet” begins with a massive crunchy riff that immediately heads east as Mehnaz layers on a snaky melody, her Hindi echoed by a distorted guitar line. As the music downshifts into a pensive minor mood carried by “strings,” Mehnaz shifts into fluent English. The pace grows even more intimate, and she starts in on the melisma, which shimmers like a smoke rising from a burning ghat.

Mehnaz invokes a desert, and then green grass, a strange here-and-there image that resolves into a classic three cord progression that blows up into a Big Rock Elton John starburst, replete with madcap pixie strings and Beatles flashbacks. Then the band sinks back into the initial riff as Mehnaz invokes Buddha and Jesus and Hendrix and Andy Warhol, which sounds like it would be corny but actually sounds like the globe is spinning so fast that east and west really don’t mean much anymore and everybody is coming to party. Finally she starts to wail in Hindi, or maybe Bengali (what do I know?) as the final one-chord riff builds to a sheltering sky crescendo that’s about as close to “Kashmir” as I expect to hear in many a moon. Robert Plant is gonna cream in his jeans when he hears this.

Though Manooghi Hi has so far signed to an Indian label, I bet that hear it he shall. This music deserves to be big, or at least to be spread very wide, from punk poppers to yogis to Bombay hipsters. Even if the vibration of “bigness” that comes off this album is only a carefully crafted hallucination (as the rap to “Hum”suggests), Manooghi Hi has the rare sense of having found a common language that is capable of fusing and mixing very different communities of listeners while actually allowing the band to say something new and powerful. That’s a rare dynamic, and though not always successful, it sounds like it should be successful, like great arrogant MCs, and that sound itself carries global dreams.

If “Kismet” is hard rock trance, then “Om Baba,” the second track, is holy punk. You start out with ten seconds of drifty tamboura, before Mehnaz starts in with a Sanskrit mantra over a rumbling bass line that soon explodes into buzzsaw Seattle chunk rock. (Mark Nichols, the keyboardist, and Todd Fogelsonger, guitarist, were both locals schooled on  grunge). Once the fury is in the house, Mehnaz jumps up a register, and you are listening to the angry—but no less spiritual—rejoinder to all that newage dreck they play in yoga class: a pissed off praise song to the guru laced with just enough sweetness to keep it from being total shtick. “Only you can shake me / break me into tiny pieces of love.”

The rest of the album does not rock as hard as these two tracks, but only because it has too much other great and surprising stuff to pull off: delirious Funkadelicized hip hop, Tori Amos searchers, wah-wah indulgence, Bollywood strings, J-pop nursery rhymes, Sufi-inspired alaps, sentimental piano balladry, psychedelic folk. But even though the styles are all over the map, the album never seems restlessly eclectic or muddled, but instead hums with an intense hunger to make music that does not skirt on top of differences but dives so deep that the molten core of unity starts to glow on the horizon. Its like those Sufi dancers who start out slowly spinning in a space with well-defined compass points until they don’t know where they are anymore, and its all a yearning blur.

Manooghi Hi are playing SXSW on March 21 at Spiro’s, 7pm.