Erik Davis
Esoterica
• 13 years ago
publish
Check it out 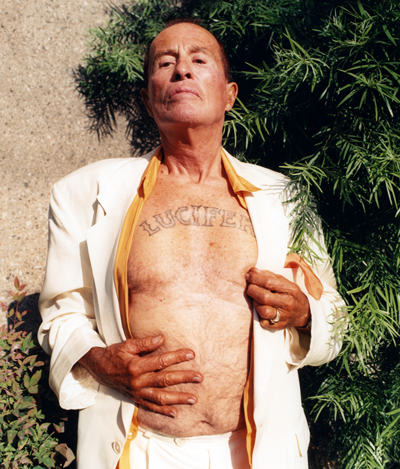 I had a fine time in LA this week. In addition to an excellent meal at the Elf Café and a delicious afternoon in Huntington Gardens, my talk at the Philosophical Research Society was the best presentation of The Visionary State material I have done. The “Occult Los Angeles” film lectures I organized at the Silent Movie Theatre also went down like a fine absinthe. We sold out one show, decided to add a 10:30 performance, and sold that out as well. The crowds seemed to love the combination of brief talks coupled with documentary, mainstream, and avant-garde film clips. It was a perfect way to explore the esoteric legacy of this weird and wonderful urb.

I took over the first half, exploring the role that the cinematic imagination played in feeding the Southland’s mystic and alternative spiritual trends. I showed some choice prints of “Meshes of the Afternoon” and James Whitney, and clips from Head, Seconds and other stuff. During the second half, an ace crew of folks presented documentary material: Maja D’oust, the moxie-infused librarian at the PRS, talked about Manly P. Hall; Reverend Paul Nugent of the Aetherius Society presented a choice clip of his sect’s founder, George King, channeling extraterrestrial intelligences on the BBC in 1958; Kenneth Anger collaborator Brian Butler showed an ultrarare and disturbingly mesmerizing home movie of the legendary Cameron; and my co-presenter Jodi Wille showed amazing clips of the theatrical rituals of the Universal World Church and the Source Family.

The most intense moment of the evening for me was definitely the unplanned appearance of occult Angeleno filmmaker Kenneth Anger, and the extordinary wrath this often cranky magic man vexed me with. He was pissed as all hell that I had not written him a note and asked him permission to show the two very brief clips from his films that I discussed, and his fury exploded to an almost surreal degree. (Though I was certainly covered under a scholar’s “fair use,” I had earlier agreed to pay for the clips.) His best line during this infernal hissy-fit was uttered after he asked me what my sign was. Perhaps foolishly, I had told him that I was a Gemini. “Well, you are a very fucked up Gemini!”

I kept my cool throughout this encounter. Anger calmed down for the show, clapped and laughed, and introduced the Cameron clip with a charming tale. Nonetheless, it was very weird talking about Anger’s films with the old guy sitting in the front row, glaring at me. But such is the life, or my life anyway, one that was made much weirder by the fact that, just a week or so before, I had drawn a mysterious card from a hippie oracle deck before embarking on a ferocious night of visionary soul-searching that involved much meditation on my “career” as a public interpreter of the mysteries. The card quoted J.R.R. Tolkien: “Do not meddle in the affair of wizards, for they are subtle and quick to anger.”

Two nights later, the angry wizard gave a talk on Aleister Crowley at the Armand Hammer museum. Along with his already released painting-pic “The Man We Want to Hang,” Anger showed a new short film, entitled “Brush of Baphomet,” that captured some recently discovered Crowley oils that were exhibited last summer in Paris. Anger gave a funny, pithy, and charming talk on Crowley’s life and art, praising Crowley’s willingness to welcome devils as well as angels as part of his family. Anger emphasized that Crowley’s religion was phallic and solar to the core. “If you want the other side, go join Wicca,” he sniffed. Anger talked about his love of Crowley’s humor—“we get the same gags”—and mentioned the amusing tidbit that Crowley had written a script for a Max Sennett-style comedy inspired by the silent films he loved to watch in the Sicilian town of Cefalu, where the beast founded his sex magick commune in the early 1920s. If he had money, Anger promised, he’d make the film, called Spaghetti.

Unfortunately, Anger does not take questions. I wanted to ask him when and how he first discovered Crowley’s work. I also want to hear him say more about how Thelema influenced the form and rhetoric of his films (Anger’s use of color, for example, is deeply magickal). In discussing his own collection of Crowleyana, however, Anger mentioned that one handwritten Crowley note he owns “still had life to it,” a magical-materialist assertion I fully buy and which justified a short and refreshing rant against computers, along with the plea that “If you love someome, write them a hand-written note.” I don’t love Kenneth Anger, but I love his films, so maybe I’ll just write him a hand-written note on some beautiful paper and ask him those questions. He might not even find them meddling.