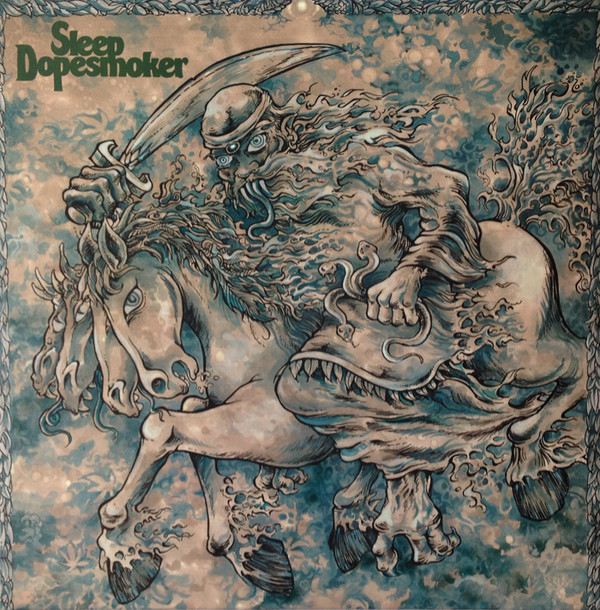 The following was included as part of the Wowee Zowee roundup of great 90s music, curated by the indefatigable Josh Glenn for Hilobrow.

I’m, like, totally baked right now, at least in spirit, which is where you want your head to be when said head gets slapped upside with Dopesmoker, a master arcanum of frankincense-fried stoner rock released by the San Jose metal trio Sleep in 2003. The album is mostly taken up with a single eponymous song, an hour-long, arguably eternal track that rears up like the monolith in 2001: cosmic, hieratic, a monster of obsidian minimalism. With “Dopesmoker,” Sleep sealed the tomb of an entire genre — doom metal — by minting an Absolute Statement that stands ever more supreme for having been released in multiple versions under multiple titles — including its earlier release as “Jerusalem” — and with multiple avatars of pothead cover art. For though there is no “definitive” version of the song, the slab abides.

And the slab abides because it rests on one of the great Mysteries of Earth: that certain plants release intoxicating powers in the human nervous system that in turn form the experiential crux of mystical religion. In its sticky fuzz, its hypnogogic conjurations, its contemplative lethargy, Dopesmoker is at once an apotheosis and hypostasis of cannabis consciousness. The first lines that bassist Al Cisneros sings — really more of a growl, a grease-monkey recitative — are also a ritual protocol, aimed directly at the listener, who is assumed to also be a seeker of sorts: “Drop out of life with bong in hand / Follow the smoke toward the riff filled land.” Perform these gestures of ascetic hedonism, and you will drift into a timeless, hazy holy land. “Jerusalem.”

Here and elsewhere, Cisneros regularly invokes Levantine religiosity — “Dopesmoker” references the Jordan, Zion, the Nazarene, the “Son of the God of Israel.” But you should not be shocked. Even Sleep’s riff progenitors Black Sabbath sang sweetly of Christ at times (perhaps because Christ was the Christos, the one anointed with sweet leaves and secret oils). Though the “creed of Hasheeshian” Cisneros presents in “Dopesmoker” may be a Dune-like phantasia of weed-priests and hemp-seed caravans, the song’s chalices and groundations also allude directly to the Zion-fixated stoners in Rastafari, the most influential cannabis religion in the Babylon of popular music.

These are crucial echoes, especially in a metal record, but Sleep here offers a mode of spiritual conversion beyond the listless stoner bro fetish for Jamaican herbsmen. To truly listen to Dopesmoker, to allow its eternity in an hour to change you, you must allow the smoke of its musical chalice to transmute the metal of your own bones. Not just to smoke dope, in other words, but to become another kind of being: a dopesmoker, a “weedian,” a “lungsman,” a “marijuanaut.”

This is the smoke covenant offered herein, oh wanderer of the wasted lands.