I woke up groggy as all hell yesterday after staying up til 6 am club-hopping in Berlin. Our small crew stuck around Mitte, avoiding (or being turned away from) the larger parties, and found ourselves grooving to strange, classic disco in a small, literally underground club painted to look like deep space and largely frequented by Asians. It wasn’t as goofy as the Russian CCCR club we visited later, whose East German mid-century danceroom kitsch formed the perfect counterpoint to the nutball mix of rock tunes, but it was still fun. I sat off to the side with Ursula, who told me the history of the place I have been staying these last few days: a former squat community called Kule, which is housed in a building whose WWII shrapnel pockmarks and old school squat graffiti now guarantees its pride of place on the tourist circuit.

Ursula is an artist, has recently found herself with the strange gig of working on costumes and set design for a TV film about the Berlin squat scene she herself experienced at Kule. Thinking about costumes got her thinking about the culture from a new angle. When she and her crew of idealistic and intensely political West Berliners first moved into the abandoned building on Auguststrasse in 1990, they all wore the plain, and inexpensive workman’s shoes favored by laborers eeking out a living under the GDR. But this was not the case with the East Germans who also squatted buildings in the hood. Instead of seeking new forms of collectivist experience, these people, also punks, were escaping the collectivist experience thrust upon them, and were rigorously individualistic in their decision making. They also sported expensive Doc Martens from the UK.

The term Kule originally stood for Kunst und Leben, but the acronym was later transformed by committee to Kultur und Leben. Now the community has the right to live in the building until 2014 in exchange for a modest rent and upkeep, but they must remain a collective operation. The kitchen is run on rather anarchist lines (all food is available to all), and this seems to work pretty well unless you have a fetish for clean dishes and the guarantee of coffee or milk for the morning.

I am sure the politics here are thick and Byzantine but I don’t know much about them. One night I had to walk through one of their consensus Plenum meetings to get to my room, and the atmosphere seemed rather dense. My pal Christopher, an American who has lived here off and on for many years, said it was actually a pretty friendly Plenum, so maybe it was just that chilly German vibe. That said, all the people I’ve met are friendly, or at least interesting, and the constantly negotiated rules of social engagement awkward but rich.

In the afternoon afternoon I hooked up with an old media activist friend named Pit Schultz, and we rode around the city on bikes, which is a great way to get around. Pit rode a fancy mountain bike (he has come to leaven his media-culture activism with corporate work) and I rode a rental bike I handily got on the sidewalk. There was a number to call, and a credit card number then got you a code that allowed the bike to be unlocked and ridden around until you were done and just left it where someone else might pick it up. Nifty, but not cheap. But then again, with the dollar tied to the whipping post, nothing is cheap, except the deliciously pungent Turkish döner kababs. 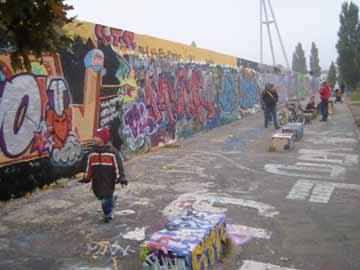 Pit took me on a quick trip through urban spaces, mostly along the grassy, still open (if crusty) wound of the wall. We cruised along strange elongated voids between apartment blocks, some spruced up into parks, some weedy and derelict, some occasionally cradling a few slabs of the Cold War fetish object itself. The path zigs and zags, a scar whose curious development reflects the question of how cities remember their history while continuing to change. One of the most horribly bizarre things to happen to modern urban space has almost become quaint, like an old carriage house. How much Berlin will cover over its schizo past as it becomes more like everywhere else remains to be seen.

We cruised through cemeteries and subway stations and past panels of madcap graffiti and over bridges that soared above the networks of trains that were once the lifeblood for this deeply industrial city, which is about the same age as New York, and whose apparently classy facades usually disguise plain red brick. We wound up the day at the new Hauptbahnhof, an immense multi-tiered train station that Pit rightly compared to the fluxes of vehicles and humans that criss-cross Lang’s Metropolis. The Hauptbahnhof was one of the more surreal urban spaces I had seen for a while, partly because it both capped and continued industrial Germany’s romance of the train into the virtual world of networks. It made me want to keep peddling along the tracks, all the way into orbit. 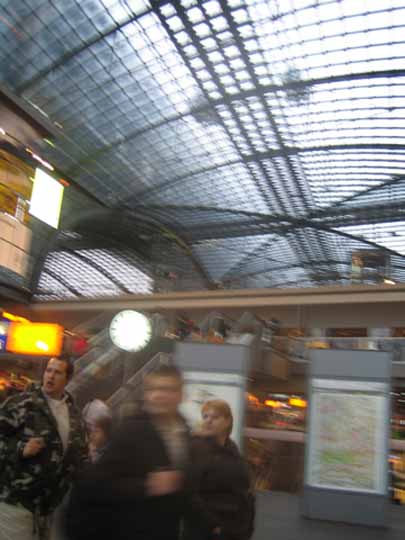