Erik Davis
Offline Archive
• 15 years ago
publish
Check it out

On the Visionary Tour

I just got back from a couple weeks on the road promoting my new book The Visionary State: A Journey Through California’s Spiritual Landscape, whose amazing photographs were taken by Michael Rauner. My honey and I squeezing into her 86 VW Westfalia with boxes of books, a guitar, and tons of CDs, including Robert Greenberg’s lecture series How to Listen to and Understand Great Music, which is pretty great itself. We drove south from San Francisco and did events in Ojai, Malibu, Los Angeles, Del Mar, and San Diego. The bookstore readings went well, and a few invitational gatherings, held by friends at their homes were particularly successful, with tons of crackling discussion and lots of enthusiasm for the project. It’s really a gas to see people turn on to the book after working so hard on it. I rounded out the speaking gigs by giving a drop at an electronic music event called Abakus 3.0, which was a hoot.

One of the highlights of the trip was the opportunity to attend the yearly Kali Puja at Kali Mandir, a humble Kali temple in Laguna Beach that is featured in The Visionary State. The heat wave was in full effect, with high humidity, but it felt like India so it worked for me. Bhagavan Das and Dave Stringer gave good kirtan, and the devotees—a friendly mixture of South Asian families, white seekers, kids, and the occasional skull-bearing hirsute sadhu—held on despite the swelter, singing and praising. Here is me basking in the vibes. 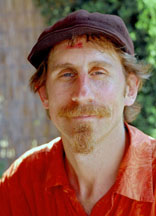 The squeeze and I didn’t have as much time for kicking back as we would have liked, though we did mozy on back up Highway 1, basking in spectacular weather and a soundtrack provided by Wooden Wand and the Mountain Goats. One great thing about VW buses is the window, which has the aspect ratio and verticality of a movie screen. In Morro Bay, whose beach campsite spooked us with its scrappy loutish denizens, encountered a grizzled hippie in Morro Bay. I bought him a beer and he gave Jennifer a lapis lazuli-encrusted bracelet because he liked her aura. She then gave him a hug and the townies around us gave us profoundly dirty looks. (This is me, though, not the sruffy dude.) 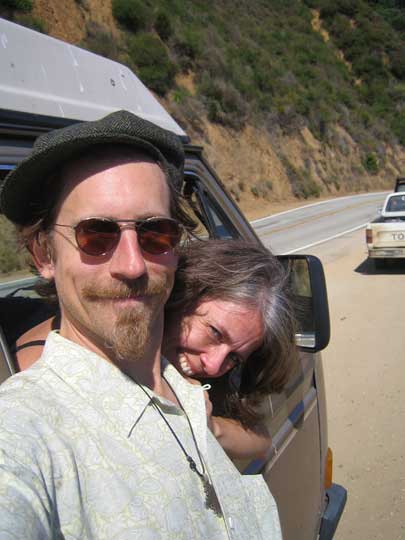 The next day we visited Esalen for a dip in the waters and a nap on the enormous lawn that hangs there at the edge of the cliff. We then made our way up to Duarte’s Tavern, an old-school Pescadero restaurant with fake wood paneling and amazing food. As we scarfed down heirloom tomatoes, artichoke soup, and the family’s famous cioppino, we overheard a conversation that made me realize again how proud and amused I am to be a Californian. A blond guy at the next table, who had been eating at the restaurant since he was a kid, struck up a conversation about Mexican shamanism with three middle-aged tourist seekers from San Jose. He gave them the lowdown on Huichol ritual objects, and then talked about his home nearby, a 100-year old cabin surrounded by 1000 year old redwoods. Then another table of folks came in, an older couple from the Midwest with their grown son, who lived in San Francisco and how brought along his tattooed boyfriend; everyone was getting on famously. Then the Mexican waitress struck up a conversation about her home south of the border. Like the olallieberry pie we later scarfed down, the whole scene was a warm, quotidian slice of sweet Californiana.<>