Erik Davis
Offline Archive
• 15 years ago
publish
Check it out

The Science of the Final Frontier 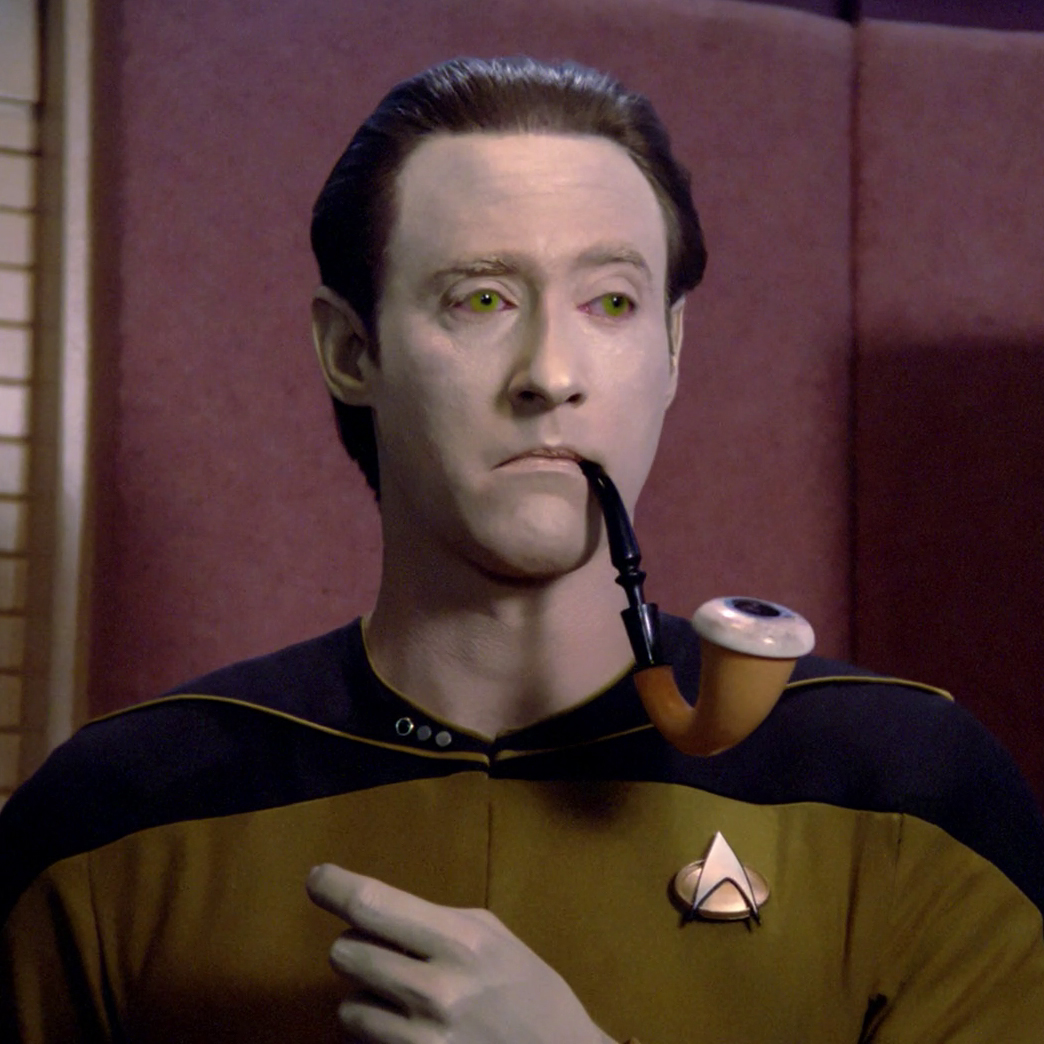 A version of this piece appeared in the VLS, October, 1998

Gene Rodenberry was the Ray Kroc of things to come: the man who faced the pregnant void of futurity by building one of the most dominant, lucrative, and fiercely guarded franchises in the history of the entertainment industry. Over thirty years have past since the original Star Trek series hit the air, and Paramount’s golden goose shows no signs of letting up: the series still dominates the syndicated TV drama market, merchandise sales have topped two billion dollars, and the “matter of Trek” — novels, comics, zines, computer games — continues to multiply like a pod of tribbles. But the significance of Star Trek far exceeds its market share or its considerable narrative power. The universe of Klingons, warp drives, and “Beam me up, Scotty” has colonized the landscape of tomorrow the way that Disney has colonized the landscape of childhood. Star Trek is a science fiction the way that the World Cup is a game.

In their forthcoming Deep Space and Sacred Time, Jon Wagner and Jan Lundeen rightly call Trek “a humanist mythos.” While fulfilling many of the social functions of traditional myth (read Jeff Greenwald’s gushy fan study Future Perfect for a globe-trotting take on this cosmos of ritual and reference), Trek also presents a modern, technologically optimistic, and profoundly secular vision. One might even rewrite the famous opening lines to say: “These are the voyages of the starship Enlightenment.” Though some cultural studies curmudgeons have taken to exposing the Federation for the same sorts of racist, sexist, and colonialist sins that seem to stain all Western projects, the fact remains that Trek is one of the few zones of the popular imagination where millions of ordinary people regularly reflect upon and affirm their own possible relationships to the onrushing world of science and technology.

For as taste of how thoroughly Trek has wormed its way into popular science, one need only turn to the growing subgenre of Star Trek science books. The granddaddy of the lot is Lawrence Krauss’ The Physics of Star Trek, an inviting mixture of pop science, fanlore, and philosophical musings that has sold a couple of hundred thousand copies in the three years since it was published. A handful of similar books have appeared since then, generally packaged with shiny holographic jackets and lists of questions on the back (“Could the transporter really split someone’s personality?”). Though their authors are obviously leaping into the bestseller breach, Star Trek science books also represent an unusual mutation in the marketplace of scientific ideas. Rather than simply lecturing to the rabble, here scientists share their knowledge with peers — fellow fans that is, who are already navigating the Alpha quadrant Paramount Studios has mapped between science and the popular.

Krauss is not the first physicist who has whittled away the hours figuring out how you could hypothetically build those magic technologies you see on UPN, but he is the first to share his musings with the rest of us. Focusing on the possible rather than the practical, The Physics of Star Trek provides lucid and lively discussions of stable wormholes, transporters, warp speed, and matter/anti-matter propulsion drives. Even when he finally draws the line at some patent absurdity, he doesn’t denigrate the show. Unlike the demon-slaying Carl Sagan, who attacked Star Trek for eroding the scientific literacy of the masses, Krauss knows that his analyses are themselves already extensions of the “universal Trekker pastime” of finding flaws, technical or narrative, within episodes. And Krauss is quick to point out when the show’s patented technobabble cannily (and sometimes uncannily) reflects esoteric points of physics.

Give the success of The Physics of Star Trek, the Darwinian laws of trade publishing dictated the book’s inevitable spawn: The Metaphysics of Star Trek, written not by Krauss but by the philosopher Richard Hanley. When Hanley’s book molted into paperback, it underwent another titular mutation, becoming Is Data Human? Presumably, Hanley’s allusion to Aristotle was lost on most folks, for whom “metaphysics” means Deepak Chopra. What Hanley means is analytic philosophy, a school of logical noodling closely allied with empirical science and fond of thought experiments. Hanley takes full advantage of the fact that Star Trek routinely sets up vexing questions it rarely answer in full. As such, many of his readings resemble a philosopher’s version of ubergeek Phil Farrand’s Nitpicker’s Guide for Next Generation Trekkers. Almost half of his book is devoted to a fascinating replay of “The Measure of a Man,” a great Next Gen episode which questions whether the android Data is a sentient being or Starfleet property. Basing his own position on behavioral evidence, and the functionalist notion that a mind is defined by what it does rather than what it’s made of, Hanley affirms Data’s moral personhood — an argument that may well become nontrivial in the century to come.

On the other hand, I sincerely doubt future generations will have much to gain from either Star Trek on the Brain: Alien Minds, Human Minds, by neurobiologist Robert Sekuler and psychologist Randolph Blake, or Life Signs: The Biology of Star Trek, by Susan and Robert Jenkins, a husband-and-wife team who should probably just stick to their respective fields of psychiatry and genetic research. Both books contain breezy and mildly informative romps through brain science and DNA, filtered through Star Trek’s portrait of alien life. Occasional jokes emerge, such as when the Jenkins observe that the growing budget for Star Trek movies “caused tremendous evolutionary changes among the Klingons.” But the writing here is clumsy and and often condescending pap. Analogies are the icing of the pop science cake, and these texts are slathered with Betty Crocker: the immune system is an army, the brain is less like a telephone system than a computer, Alzheimer’s leaves “molecular potholes” on “the intracellular highway.” These authors don’t use Trek as an instrument of thought so much as a source of convenient illustrations for whatever it is they think we ought to know.

In contrast, Athena Andreadis’ To Seek Out New Life: The Biology of Star Trek exploits the science of Trek to open up larger questions about society, and she does so with a punchy conversational tone and analogies that sing (because of its easy coupling but enduring bonds, carbon is “the Marcello Mastroianni of elements”). Like the academics who crank out the usual suspicions in Enterprising Zones: Critical Positions on Star Trek, Andreadis questions the cultural prejudices tucked away in the Trek universe, but she does so by looking at the show’s biological rhetoric. For example, the paucity of weird carbon-based lifeforms and otherworldly flora, along with the unlikely ease with which aliens interbreed, point to Trek’s essential anthropocentrism — even the planet-eating Crystalline Entity behaves like a mammal. Star Trek is also troubled by any ambiguity that threatens the autonomy of individual organisms; because of this, collective species like the Changelings and mechanical/organic crossovers like the Borg almost invariably play the bad guys. At the same time, the Federation, whose behavior Andreadis compares to “a Texan on holiday,” appears to have no qualms about spreading Starfleet’s germs around unknown planets.

Throughout her incisive if somewhat rambling discussion, Andreadis maintains the classic fannish attitude of cantankerous affection, a stance that Constance Penley calls “tough love.” On the one hand, Andreadis mocks Star Trek for its prudish timidity, its Yankee colonialism, and its constant waffling over strong female characters (she also wins major points for predicting that the writers would kill off Jadzia Dax on Deep Space 9). But in the end, and like all her fellow writers of Star Trek science books, she comes down in favor of Star Trek’s portrayal of an essentially tolerant, secular, and social quest for knowledge. This shouldn’t be surprising: Star Trek’s story has a lot to do with the story of science, a story that most of these authors worry is losing ground. As such, all of them anxiously berate Trek for its credulous portrayals of telepathy and incorporeal beings. But they also recognize that the show nonetheless gestures towards what the Trek trickster Q called “the unknown possibilities of existence,” and that all fans are, in their own way, already popular scientists.