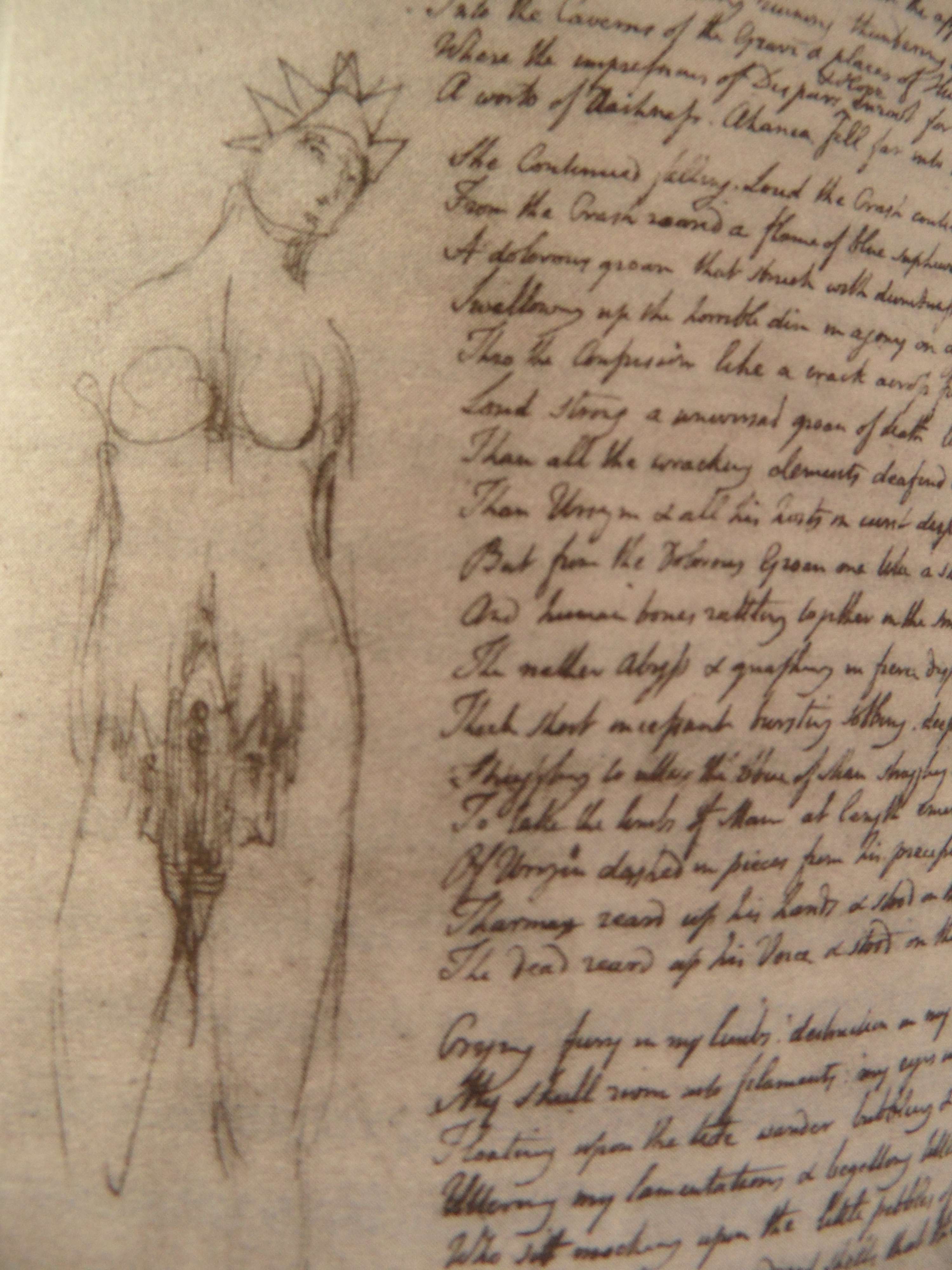 Like a lot of folks drawn with almost equal power towards spirituality and the delights of the senses, I count William Blake as a hero and mentor. When an older chick in a Unitarian Youth Group I ran with turned me on to The Marriage of Heaven and Hell in high school, my already dangerously expanded mind was thoroughly blown with Blake’s carnal theosophy, raging humor, and imaginal fire. The fact that I studied the longer and even wackier prophetic works of this delirious visionary radical at a button-up Ivy League also blows my mind, as does the enormous amount of critical literature and commentary that has grown up around Blake. That said, most of this literature downplays the esoteric influences on the poet. While academics love to trace influences, there remains a romantic sense about Blake that his peculiar visionary fire came more or less as a bolt from the blue.

In Why Mrs Blake Cried, repackaged for a more prosaic American market as William Blake’s Sexual Path to Spiritual Vision, the freelance PhD Marsha Keith Schuchard makes a strange and compelling case that Blake’s imaginative universe was deeply shaped by a thriving London subculture of spiritual sexuality—a mixture of Swedenborgianism, hermetic alchemy, Kabbalah, Tantra and Moravian mysticism that she unearths with somewhat shocked fascination. Transmitted partly through the poet’s parents, these esoteric sources not only inspired many Blakean themes and images, but—and this is the key part—probably provided Blake with certain bedroom practices that helped the already inspired fellow, uh, further penetrate the veil.

I knew a little something about some of these groups, gurus, and spiritual paths, but I had no idea that orgasmic mysticism was as rollicking and widespread in 18th-century England and Europe as Schuchard shows. Even if you don’t know or care much about Blake, this rich historical backdrop is eye-opening. Besides its intrinsic interest—who knew followers of Jesus could get so sex-positive!—this material goes a long way to correcting the mistaken assumption that spiritual sexuality is exclusively the property of Hindus or Chinese Taoists, and only comes into Western esoterica late in the game. In addition to the deep sexual lore embedded in the Kabbalah, many hermetic and mystic Christian groups discovered that the emotional and sensual intensities of sex—especially when properly “tabernacled”—can lead to visionary trance. In Blake’s words,

he whose Gates are opend in those Regions of the Body
Can from those Gates view all these wondrous Imaginations.

Schuchard traces the dense and appropriately interpenetrating sources for all this spicy sex mysticism: heretical Kabbalists, early Orientalist texts, underground Rosicrucian rituals, and the obsessively physiological researches of the amazing Swedenborg. The Besides that Swedish mystical polymath, who was fascinated with cremaster muscle and who believed that angels fucked, Schuchard trots out a series of characters who must be read about to be believed. These include Count Zizendorf, the controversial Moravian prophet who called on his congregation to snuggle into the vaginal “side hole” of Christ’s spear wound, and Dr. James Graham, a Scot who built a “Celestial Bed” for his Temple of Hymen, where couples seeking beatific bliss could avail themselves to a Pacific King-sized contraption that was infused with electromagnetic currents, perfumed with incense, and decorated with sculptures of horny Greek gods. Schouchard also touches on the significant links between this subculture and the radical politics of the day, suggesting that the tie between visionary hedonism and social transformation was not restricted to the hippies.

I strove to seize the inmost Form
With ardor fierce & hands of flame
But burst the Crystal Cabinet
And like a Weeping Babe became
A weeping Babe upon the wild
And Weeping Woman pale reclind
And in the outward air again
I filld with woes the passing Wind.

Schuchard argues this poem depicts Blake’s attempt to restrain ejaculation and use the resulting near-orgasmic bliss to enter the imaginal realms of “the inmost Form.” Unfortunately, our man can’t keep it together. Like so many male tantric trainees, he bursts the crystal cabinet with a spurt that sends him hurtling back to the outward earth.

For all her refreshing frankness about the arcane of sex, Schuchard often seems more than faintly critical of the horny excesses of her cast of characters. While admiring their audacity and radical imagination to some degree, she is also sensitive to the suffering it causes, especially to wives. Mrs. Blake cried because she married a mystic horndog who wanted to be flush with virile potency 24-7.  As readers of Blake’s often sexually frustrated verse know, this conflict was a major and painful issue in their lives. At the same time, Schuchard presents a rather happy conclusion to this struggle when she comes to discuss their late middle age. In a fascinating if somewhat wobbly argument, Schuchard claims that the growing body of decent knowledge about Indian tantra—brought back by East India Company employees and randy packs of amateur Orientalists—allowed the Blakes to expand their world view to include a more balanced view of sexual polarity. As the yantra-like yonis that Schuchard describes in Blake’s late prophetic texts seem to indicate, Blake was able to shift his obsession from seminal retention and masculine visionary mastery towards a more holistic an expanded worship of female sexual powers.

So what’s the take-away for us today? I’d say it’s the recognition that human visionary potential can be stoked through the creative if sometimes risky intensification and transformation of the sexual urges and habits. By going against the grain, whether through sacred sublimation or dangerously uncorked desire, the reproductive urge fires the imagination. The belief structures that emerge from these visionary experiences may themselves be wacky or off base. That said, the imaginal faculty, and the realm accessed through these practices, does itself seem to be a real place, or at least as real as art and poetry.