You are looking at the hive mind 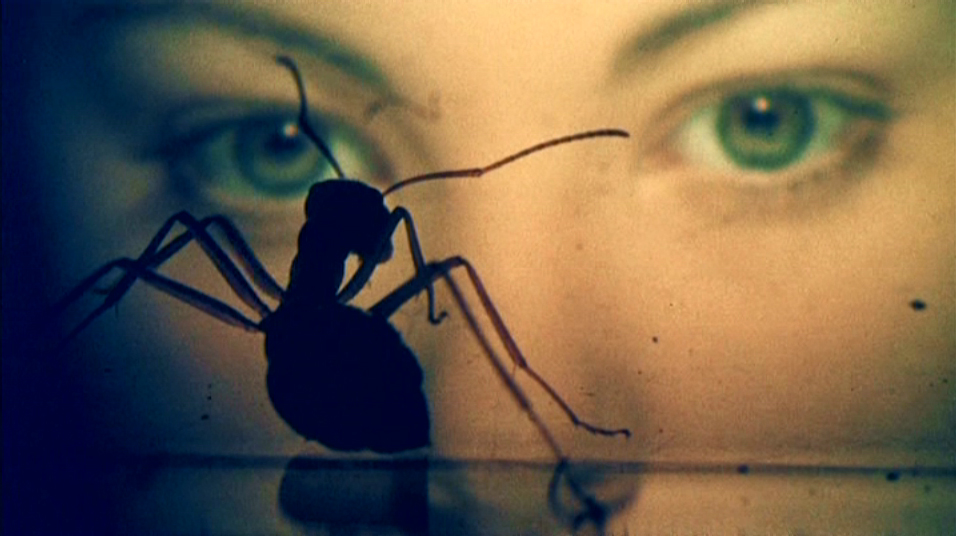 The Pilkdown Man just wrote me from England, asking me to pick him a DVD that just came out this year and for some peculiar reason involving Best Buy is unavailable across the pond. Phase IV is a high-concept 1974 SF film about a rapidly evolved ant society. Undemanding in a B-movie way, the film is intelligently plotted, magically shot, and imaginatively designed, and shimmers with radiant pulp prophecy.  Along with Silent Running and THX 1138, Phase IV nails that peculiarly chilly Seventies SF vibe, and its sobering underlying theme—the growth of an alien network consciousness that combats and finally transforms humanity—is as resonant as Lucas’ surveillance state or Bruce Dern’s melancholic efforts to use robots to save the earth’s last redwood groves, whose deeps-ace geodesic greenhouse homes are ordered destroyed.

The geodesic dome also rears its head in Phase IV. Its iconic geometric lattice, so reflective of the minimalist utopia of the era, houses the research lab that two scientists set up in the barren Arizona desert named, with Stalker-esque nebulosity, “the Zone.” Following some unspecified 2001-like cosmic conjunction, a variety of formerly rival ant species have rapidly evolved into a single imperialistic and deeply intelligent hive mind that are taking over the place, and the two scientists—a gruff and pugilistic entomologist armed with heavy pesticides and a hairy-chested nerd game theorist—are attempting to learn about the mega-pests in order to eradicate them. The entomologist declares them as the paragon of collectivist social organization, a Marxist machine society without the need for a five year plan, and “powerful in the mass.” He wants to destroy this apparently hostile machinic assemblage, though the battle does not go as planned and the scientists wind up hosting a frightened local teenage girl. Eventually the scientists realize that they themselves are the subject of an experiment.

Architecture and design is a key vector. The scientists announce their future consciousness with the geodesic dome that trumps the dilapidated desert houses they first find in the Zone. The ants show their intelligence in part by building vaguely ominous and hieratic pillars and creating simple geometric crop circles in the grass (way ahead of the curve on this one). Phase IV was the only film directed by Saul Bass, a legend of title sequences, and his attention to design runs throughout the film, which communicates its posthuman anxieties through image as much as narrative. The scientists’ mainframe and communications tech is lovingly fetishized, as close-ups of the electronics reveal yet another architecture as the canny ants inevitably move in and begin laying havoc. All these spaces—the circuitry, the dome, and especially the minimalist ant structures—reflect a science fictional take on certain minimalist and conceptual art practies of the time, currents that very much inform the “chilliness” and sober vibe of early Seventies SF. This stuff is visual equivalent of those melancholy electronic synthesizer sci-soundtracks retrofuturistically reinvoked by Boards of Canada and other analog nostalgists.

The photography, and particularly the close-up ant sequences, is gorgeous and uncanny, as the cool minimalist eye extends to unforgettable images of ants and mantises fighting and consuming one another inside the guts of electronic gear. In these close-up sequences, the ants themselves are amazing—mischevious, alien, conniving, and occasionally repulsive, as in the sequences of the queen giving birth to  eggs that called to mind the gooey pods of the Matrix.

The film’s great insect photography is only one way that the movie thematizes media technology and its “Expanded Cinema”-worthy effects on consciousness. The cameras themselves are pushing their sensory limits. Along with the close-up, we see some creepy time-lapses of ants consuming rodents, a few kaleidoscopic “ant’s eye view” shots, and some vaguely psychedelic light shows on the oscilloscope—non-communicating patterns that are said to represent the language of the ants.

In these ways, the ants themselves become stand-ins for technology itself. At two points, a loving close-up of ant eyes melts into an abstract ice-blue grid, suggesting computer circuitry, sensors, and electronic nets of all kinds. The chattering of the ant’s network mind is represented at times by electronic noise, as if our machines themselves are babbling their way towards the hive mind. And geek historians will thrill to all the mainframe porn, with close-up of tape reels, monitors, printers. Though we see no punched cards, alas, we do get to hear Michael Murphy’s game theorist say “transfer to mag unit three.” Hot. One reason this film hits hard is that it resonates with the anxiety that we are ourselves becoming a kind of electronic ant society. As we entrain ourselves into tighter and tighter webs of communication, we create more hive-like conditions, putting pressure on the command and control logic that shapes individual agency. It is no accident that we now embrace the the “wisdom of the crowd,” and actively engineer such massive “bottom up” many-to-many networks. When the ants take out the air conditioner that keeps the computer cool, it is not the usual “revenge of nature” scenario. They are simply demonstrating their superior network capabilities.

A more in-your-face echo of Phase IV in today’s headlines was the news last spring about the electronics-eating ants who have swarmed into South Texas. These ants came out of nowhere and seem largely impervious to conventional pesticides. They also enjoy attacking electronic gear like computers and fire alarms. But the most unnerving thing about these “crazy Raspberry ants” is how their hive mind tactics have evolved. Rather than organize themselves in the usual regimented paths, these ants run willy-nilly. Even killing the queen does not dent them, because there is more than one queen. These are Deleuzian ants—decentered and deterritorialized. And they want to consume your iPod.

Perhaps inevitably given its era, Phase IV has a mystical undercurrent. The ant structures are pure solids and Platonic forms, including a sort of lopped-off diamond-like pyramid that the ants use to reflect light into the research lab—light that we see with the sort of blinding overexposure that is so often the sign of the Absolute in early Seventies film. Their coolest structure is the last one we encounter: the minimalist chamber where the final encounter with the ant consciousness ambiguously fuses with the hebephilic subplot that has been dangling throughout the film like the neck-tie on a catholic high school girl. The narrative loses coherence, in all the ways it should, melting into some sort of eerie and erotic interspecies third-eye-zapping metamorphosis that heralds a new dawn—a posthuman desert sunrise as ominous as it is awesome.