Ronin on the Prowl 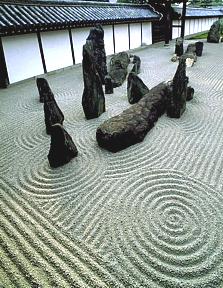 This Friday, Nik Bärtsch’s Ronin is finishing their American tour at San Francisco’s acoustically delicious Yerba Buena Center. I’m got two tickets and I’m psyched, far more than I usually am these days, and especially with an act I’ve never before seen live. I was going to wait and write about the show and the album together, but ECM’s friendly and excellently named Tina Pelikan asked me to pump the performance for all you locals, so here’s the pump.

Nik Bärtsch’s Ronin is a Swiss act that plays a modular, intricately looped minimalist groove music they call “Zen-funk,” although another one of their tags—“Ecstasy through Asceticism”—is equally apt. The group is led by—you guessed it—Nik Bärtsch, a composer, pianist and percussion nut based in Zurich and Berlin. Stoa, their first ECM record, came out a couple of years ago, and it was haunting and propulsive, but the new album Holon is both groovier and more conceptually realized. Along with Bärtsch, who has abandoned the Rhodes he played so spookily on Stoa for acoustic piano, there’s an amazing drummer (Kaspar Rast), an amazing bassist (Björn Meyer), a solid reeds-man with a single name (Sha), and a brilliant percussionist named Andi Pupato who I look forward to seeing live in order to understand what sort of jungle rattles conjure all those shimmers and shakes.

There is a definitely a formula at work here, a cellular architecture of sound construction that Bärtsch calls “modules.” Simple phrases and modal motifs are established, looped and slowly embellished in a “spiral continuum” over rhythms that spurn the 4/4 in favor of 5 or 7 (I think) or polymetric layers of 2 against 3. Listening to this stuff, I am reminded of Dave Brubeck, Steve Reich, other ECM space jazz, even some John Carpenter spooky soundtrack shit. It’s organic, but without the hazy, fuzzy romanticism that word can conjure. Its organic, not in the way that bees bumble through the flowers, but in the way crystals grow, deep in the mountain.

You’ve got to hand it to ECM—they have been honing their vibe for so long that, even though they put out straight jazz, classical and early music, neuvo art stuff, and supperclub soundtracks, all their releases somehow exist in the same branded sound universe, a land of fjords and northern lights and silver monuments under cool grey skies. The label is not without flaws—the glossy production can succumb to a garish fetish for the tastee, and the saxophones especially are wont to sail away into smooth yazz limbo. But the label manages to put out a good handful of genuinely innovative albums every friggin year, and each one manages to sound like nothing else but still sound like ECM.

Holon is meticulously composed, and has a Euro air of clarity and control, so much so that the groovy bass occasionally sounds mannered when it wants to sweat. But there is something, well, deeply Zen about this music as well, as if it were tuning into what Gregory Bateson called “the pattern that connects”—the deep weave that links cells to cymbals, funk to architecture, the 2 to the 3. By probing and constructing this modular pattern of connections, Ronin’s music becomes an abstract ritual, touched with the sacred, without losing its modern and conceptual tang. My pal Evan Bluetech, a composer and electronic musican, called it a “personal jazz shamanic journey into deeper and darker emotional space.” It must be the jungle rattles.