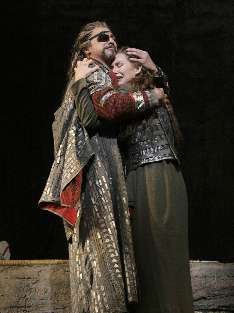 Last night, the core strength of the Seattle Opera’s Ring became crystal clear. This a Ring cycle focused, first and foremost, on drama. The acting, staging, sets, and props, were all designed to draw us into a story as tensely knotted in its emotions, allusions, and philosophical implications as the world ash the supports Hunding’s hut. This cycle is traditional not only in the sense that the trees look like the Olympic peninsula and the characters look like they perform in Finnish metal bands, but in the deeper sense that it seeks to manifest the grandiose integral aim of Wagner’s art: to create a synthetic work that fuses music, narrative, text, and theatre into an alchemical drama that achieves the resounding dimension of myth even as stages the final destruction of that dimension.

The preference for fragmentation and the distrust of totalizing organic structures are all well-defined late modernist aims at this point, and they tend to cut against such alchemy. And during intermission I was reminded one reason why: we passed by a middle-aged long-haired fellow in a proper German SS outfit, with a home-brewed armband reading “HSS.” He uttered a gently lewd complement to my astoundingly dressed wife. A weird encounter, but one that made me suspect for a moment that he was a white pride nutter with particularly bad taste, a Wagner enthusiast of what one could call “the old school.” (It turned out he was making a weird statement about “Homeland Security Service.”)

Leaving aside the complex topic of Wagner’s relationship to National Socialism, it seems clear that his “totalizing” operatic art—despite some of its decidedly non-fascist ideas—could lend itself to a certain kind of all-consuming quasi-mythic worldview that late modernist pluralism is almost in principle defined against. But by ignoring Wagner’s directions, layering on complex historical ironies, being goofy, or emphasizing non-naturalistic elements, more modern Wagner stagings work against—without necessarily negating—the sort of intense engagement with the dramatic material I experienced Monday night, where one is not only swallowed up but, quite possibly, transformed.

Sometimes, in other words, its nice to just kick back and watch the movie. Besides, there are always plenty of “modernist” interruptions anyway, which on Monday night not only included all the ridiculous middle-brow schwag the Seattle Opera was hawking (cheesy horned Viking helmets anyone?) but also a dozen or so lighting flubs and lamely deployed spotsthat  broke the fourth wall on a regular basis, particularly in act two. That’s one of the troubles of naturalism on stage of course: when the effects are not special, you can’t write it off as a director’s whim.

In any case, Monday’s performance opened up for me the full dramatic pathos of Wotan’s ironic conundrum—his desire to intervene in the world to protect a human hero (Siegmund) he values precisely because the man is a free agent rather than a vassal of the gods. In essence, Wotan wants to follow a form of what Star Trek called the Prime Directive: the decision of an advanced civilization not to intervene in a more struggling one. But as the goddess Fricka makes clear when she convinces Wotan to kill his hero for breaking the marriage vows that Fricka protects, Wotan is a hypocrite, having already directly intervened in Siegmund’s life on many occasions. He wants to have his cake and eat it too. Bad god. So he must kill the thing he loves, and that he loves precisely because his creation is not compelled to love or even know him.

There are many philosophical mysteries suggested here, and part of my amazement last night was to find myself contemplating some of the core conundrums of the big enchilada while being immersed in the intoxicating pleasures of one of the greatest shows on earth. There is a mystic Hegelian echo of the notion that we are split off from the gods precisely because they are lonely or bored and need autonomous fragments of themselves to generate novelty and true encounters. Wotan has his own more self-serving motivations as well—he wants Siegmund to win back the ring—but I was still amazed at how Wagner can squeeze emotional power out of a situation—a god’s desire to free his own subjects—that is pretty far from our condition.

But what are “the gods” today? From an evolutionary biological perspective, you could say that the gods are memes, or meme-plexes, constantly reincarnating archetype-behavior-instincts (honor, marriage, vows, love, etc) who are immortal because there keep running themselves through all the human hardware-bots that sex keeps churning up. As in Stephenson’s Snow Crash, the era of the gods is the era where humans are totally controlled by the collective information viruses that control their behavior. Wagner’s twilight of the gods, then, occurs when these circuits break down and something like free will emerges: the human capable of side-stepping, challenging, or reprogramming the god circuits.

The dark irony of Wotan’s failure to either protect Siegmund or truly allow him his autonomy delivers us to vexed heart of agency itself, of the (highly questionable) independence of the philosophical subject. There is a foreshadow, perhaps, of Wagner’s later conversion to Schopenhauer and his pessimism of the will. But while watching the drama, my weird brain also came up with a more contemporary reminder of our own shifting agency.

One of Wotan’s interventions in Siegmund’s life is the sword that he hid, easter-egg-like, for the hero to find in the hour of his greatest need, a sword that is protected by Wotan’s godly command. When Wotan, urged by Fricka (who made an interesting non-standard appearance at the close of Act 3), confronts Siegmund and shatters the sword, I flashed, somewhat absurdly, on a current blog worry bead: the news that nearby Amazon had chosen to erase books from people’s Kindles without letting them know, a spooky foreshadow of a post-ownership information society of endlessly managed data control. “What a kook,” I thought of myself. But as I thought more about it, I realized how, in turning over more and more of our consciousness and culture to the information nets, we are eroding precisely the autonomy that Wotan, perhaps hopelessly, wants to see in Siegmund: a human decoupled from stable meme circuits. We are weaving ourselves ever more intimately into collective nets of ideas and affects, of prompts and programs, and these new “god-nets” render the differences we might try to insist upon—between decision and reaction,  autonomy and submission—progressively less clear.

What thrusts against Wotan’s ironic failure, of course, is his much-loved daughter Brunhilde, the true hero of the opera. Brunhilde normally behaves as a pure function of Wotan’s will and thus herself a kind of slave or “sacred instinct”. In protecting Siegmund, she chooses to reflect Wotan’s hearts desire rather then his rational submission to Fricka, thereby expressing the deeper split in Wotan between law and heart. She follows the spirit of the law rather than its letter. But what does the spirit get you?  It earns Brunhilde an annoying “This hurts me more than it hurts you” patriarchal punishment from Wotan—a punishment that was nonetheless incredibly, almost deliriously moving.

At the same time, Brunhilde takes on the lineaments of the perfect super hero, a Promethean Wonder Woman—a super hero and precisely not a god, a modern figure, the most original character in Wagner’s operas, a secret sharer in human self-determiation rather than a master and commander or a fading chunk of folklore. In Brunhilde, Wagner’s rhetoric of heroism shows itself to have little to do with masculine military might proper—Brunhilde is a she after all, and takes warriors when they fail and die. Instead, Wagner’s heroism is the mythological expression of the dream of agency itself—the affirmation of free will over determinism. Choice itself, perhaps for all of us, is the last, and almost certainly impossible, heroic move.

Not bad for a night of fat ladies singing!