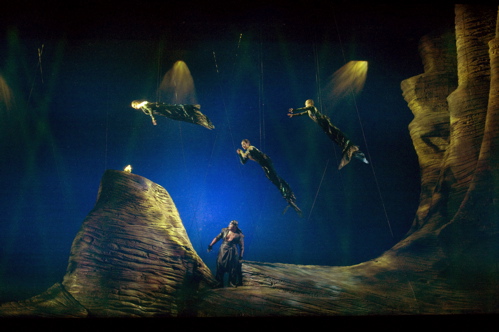 After a grinding car ride up Interstate 5, it was a relief to sit back in our dress circle seats for Das Rheingold, the opening bon-bon of the Seattle Opera’s complete staging of Wagner’s Ring of the Nibelung. It’s not a new production, but that was fine by me, because one of the attractions about the Seattle Ring was its solid rep and the fact that the production design was about as trad as it comes these days: realistic forest scenes, pagan costumes, no postmodern meta-commentary. I wanted my first full Ring cycle to be archetypal, in the loose sense of the term: a monument of Northern mythos intimately woven from the elements. When I first read about the Ring cult in the NY Times twenty years ago, something Susan Sontag said made me realize with preternatural clarity that, in a few decades time, I too would become a cultist, and that the Ring would be to the second half of my life what the Lord of the Rings was to the first. So my first in-the-flesh cycle better look like Middle-Earth.

From water, Wagner eventually descends to earth, to Alberich’s cave where the Rheingold is worked by industrial slaves.  I was disappointed with the invocation of Nibelungland. The staging was murky and vaguely conceived, while the famous clanging hammer blows that introduce the scene—startling sounds for a nineteenth century opera, like a sample of jackhammers today—were prerecorded. Blech! Also underwhelming was Alberich’s magic transformations, first into a serpent and subsequently a toad—properly shamanic metamorphoses suggested here by mediocre Muppets seemingly played for laughs. Easy cheesy.

Overall, however, the drama was fully embodied, the world as realized as realization gets when there are lighting mistakes and the guy behind you is crinkling his cough drop wrapper. The leads all sang strong, though only Stephanie Blythe as Fricka truly stood out, while the voices of both giants had tremendous character, rattly and unsettling rather than purely powerful. I have some niggling doubts about Greer Grimsley’s staying power in the grueling Wotan monologues to come, but I am rooting for him. The orchestra, under the direction of Robert Spano, was also solid, if only occasionally percolating into true amazement. While the pacing and dynamics were  spot on, a  provincial glaze could be heard settling over a number of passages, particularly in the brass. My wife and I had boned up on Wagner’s musical leitmotivs in the car on the way up, listening to Deryck Cooke’s helpful but hilariously snooty and arguably insane breakdown of the endless permutations and meanings of Wagner’s musical themes. The extremes to which Cooke takes this style of analysis reminded me a bit of the linguist de Saussure’s study of Latin verse, which led him to “discover” anagrams everywhere. Studying these musical phrases was like preloading emotional memory, like prepping for allusion, and to judge from my experience last night, it both deepened the experience of Wagner’s musical drama and made it slightly more alienating. On the one hand these recognitions opened up the depths of foreshadowing and irony, and deepened the sense that the orchestra is a kind of story-teller literally weaving its tale with recurring patterns and motifs. But I also felt like a trainspotter sometimes. Too much head. Eventually I allowed the emotional nuances of the ever-morphing repetitions to melt the semiotic meanings into more felt material, to return the story, once again, to sound: the slow sweet grind, fifteen hours plus to go, of a world—many worlds actually—ending.