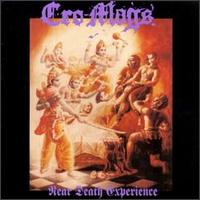 In the 1970s, they peddled flowers in airports, but these days, the beaded and saffron-robed devotees known as Hare Krishnas are on stage and in the pit. Thirty years after A.C. Bhaktivedanta Swami Prabhupada brought Krishna Consciousness (and free food) to the freaks and burn-outs in the Lower East Side, the movement has gained a small but extremely vital presence in the hardcore scene. Bands like 108 and Prema put out uncompromising metal-edged Krishna-core on the devotee-run Manhattan label Equal Vision Records, while zines like Krishna Grrrl, War on Illusion and the more all-purpose Anti-Matter discuss music and philosophy. The razor-pop band Baby Gopal just released “Shiva,” their first 7-inch, while new material is expected from longtime Krishna devotee Poly Styrene, ex-vocalist of the great British punk band X-Ray Spex.

And then there’s Shelter. Singer Ray Cappo is a brahmana (priest) and guitarist Porcell is a brahmachariya (renunciant student) who live in a Krishna temple housed in a former synagogue in downtown Brooklyn. Mantra, their latest album, is easily digestible metal-core that includes vegetarian battle cries, attacks on sex and TV, and homages to self-realization and the Bhagavat-Gita.

A decade ago, the duo fronted the famed straight-edge band Youth of Today, which took strong and often preachy stands against intoxicants, smoking, violence, and meat-eating (in contrast to their current vows of celibacy, Cappo says their views on sex back then were “very ambiguous”). Rejecting what they saw as a selfish, cruel and materialistic culture, Youth of Today transformed the punk ethos of refusal into a puritanical revolt, and it wasn’t long before Cappo started dabbling with the ultimate alternative lifestyle: a committed religious life.

But why did Cappo fall for Krishna, the blue flute-playing Hindu lord of love? The story begins in 1980, when a Navy SEAL commando named John “Bloodclot” Joseph encountered the Bad Brains, Washington D.C.’s stupendous Rastafarian hardcore band. “I just wanted to be this SEAL dude, and fucking kill everything that got in my way,” Joseph told me from the Norfolk, Virginia military prison where’s he currently being held for going AWOL. “When I met the Bad Brains, it was like a whole other aspect of life opened up. They just seemed really mystical. ” When Joseph met some Krishna devotees through a health store, he discovered an ganja-free Aryan equivalent of the righteous faith that fired the Brains. “The material world just didn’t matter to the devotees because they had something better and they knew it. When I started chanting and going to temple, I knew it to.”

So Joseph went AWOL, living in and out of temples and winding up in the Lower East Side, where he founded the legendary Cro-Mags. Unlike the nice suburban jocks in Shelter, the Cro-Mags were ferocious skinheads. “It wasn’t like we were up on stage in dhotis and chanting,” Joseph says. “It was all-out assault. Even in the Vedic philosophy, there are different kinds of people. Not everyone is meant to be a monk and live in the temple. There’s the kshatriyas who were meant to be warriors. I would chant and meditate before I went onstage, and get into this mystical-type warrior mentality. We didn’t promote violence, but sometimes things happened.”

Though bands like Antidote and Cause for Alarm picked up on the Cro-Mags’ balls-to-the-wall spirituality, Cappo initially wrote off Krishna Consciousness as “culty and peculiar.” But as Youth of Today became more successful, Cappo became frustrated with his own life. “When we started, I was anti-greed, anti-lust, anti-anger. But as the band got bigger, instead of those things going away, I found them blossoming more. They were weeds choking the life out of me.” He practiced yoga and studied Buddhism, and eventually met H.H. Dhanurdhara Swami, a longtime Western devotee of the Prabhupada. Cappo was impressed. “He was the happiest person I’d ever met. I wanted to be like that.” After the final Youth of Today tour in 1988, he hopped on a plane to India. When he returned to the stage two years later with his new band Shelter, he was wearing beads.

Krishnas believe that the surest way to God in our degenerate “Age of Quarrel” is to chant His name. They also like to share this belief with others, an evangelical thrust that fit quite well with Cappo’s already-developed role as a straight-edge pundit. “I find it peculiar that bands can actually perform without having any message. You become reduced to an entertainer instead of a communicator.” Cappo is unabashed about his mission. “It’s easy to spread messages in the hardcore scene because its already a little society. And Krishna is a nice message.”

“We don’t just do it to put out this positive spiritual message,” adds Porcell. “We do it for our own purification. You can’t just shout all these slogans. There’s a method to changing your consciousness. That’s what yoga’s all about.” Porcell compares Shelter’s thunderous growl to the sacred bhajans the devotees sing for hours in temple. “The music is much heavier, but I find it’s the same kind of feeling. Onstage, I’m meditating on the lyrics. Five hundred years ago, when these traditional bhajans were written by the great acharyas, the mood was the same, except they used old drums and cymbals. Its almost like we’re doing bhajans for the 90s.”

This deep continuity can also be heard in Kirtan Ecstasy, a collection of New York temple songs released by the hardcore label Equal Vision. The standout cut is the gorgeous “Koda Nitai,” where Sri Keshava sounds like Juliana Hatfield falling in love with God. An Australian devotee who lives in the same temple as the Shelter boys, Sri also sings in Baby Gopal (which means “darling of the cows”, a pet name for baby Krishna that Sri chose because it was cute). Cappo just produced their first single, and he and Sri are engaged, despite the fact that Krishnas stress celibacy (“Having sex is like trying to put out a fire with oil,” Cappo says). Baby Gopal’s lyrics are more personal than in-your-face, but the devotion is there. “It’s very hard to sing about nonsense night after night,” Sri says. “You get burnt out. By having lyrics that actually means something, I can stay enthusiastic throughout the set.”

Given hardcore’s origins in punk nihilism, it’s no surprise that some denizens of the scene think the Krishnas are a bit too enthusiastic. After all, with their gurus and absolute truths, the Krishnas promulgate an authoritarian world-view that’s a far cry from anarchy. Cappo himself supports a conservative social agenda, and like most of his brethren is opposed to homosexuality and abortion. In response to the expanding influence of the Krishnas, the punk bible Maximum Rock’n’Roll ran a scathing attack on the movement a number of years ago.

“The article was all about how Krishnas brainwashed you,” says Norm Arenas, a New York hardcore kid who now edits the music zine Anti-Matter. “But for some reason I was attracted to it.” He couldn’t believe that Youth of Today would fall for an insidious cult. After the sudden death of friend, Arenas found himself face-to-face with questions most of us spend our lives dodging. He found the Krishna Consciousness not only offered answers but also a deep emotional intensity he knew from the hardcore scene. “The first time I saw the Bad Brains it was a spiritual experience. But after a while, that experience dies. Now I mostly go to shows to see friends. The thing about Krishna consciousness is that I always get that feeling when I go to the temple, that anticipation. It never gets dull.”

Today, hardcore kids make up a sizable portion of the movement’s younger cadres, at least in New York. These days John Joseph is only a loose devotee, and he’s highly critical of ISKON, the official Krishna organization. “All these new kids coming around are getting misled. They don’t let these kids know what happened in the movement, all the shit that went down.” He mentions sex scandals and thievery, as well as the sordid tale of drugs, guns and murder told in the book Monkey on a Stick. “I’ve seen it all ’cause I’ve been around. I was misled too. My spiritual master was having sex with a 15-year old girl.” Shunned by many devotees, Joseph recently helped set up an independent Krishna temple in a storefront in the Lower East Side to combat what he sees as the degeneration of Prabhupada’s original principles. “They’ve just turned the pure beautiful thing that Prabhupada gave us into this deceitful, dishonest, spiritual farce.”

Whatever the internal problems of the Krishna movement, the folks I talked to were not dogmatic robots but thoughtful people negotiating the conflicting demands of traditional religious practice and the chaos of a modern world they do not entirely want to reject. When I asked Cappo to describe his devotional day, it was clear that he spent less time memorizing Sanskrit sastras than he did working on music business or developing Civilization, his cruelty-free line of skateboard sneakers. “In one sense, it’s easy to sit in the Himalayas and chant,” he says. “But with Shelter, we’ve got to get right in there and mix it up. Its hard, but I’m learning. The Bhagavat-Gita is all about being in the world without being of it.”