The Freak of Araby

Friday night brought me the unmitigated delight of catching the first stop on Sir Richard Bishop’s current tour, which is supporting his album The Freak of Araby, an album of Middle Eastern (and Middle Eastern inspired) instrumentals that has a smoky harem tart smoldering on the cover. Ever so slightly constrained, the album remains a nice fat slice of cannabinoid baklavah, especially if you like your Turkish psych and your Elias Rahbani and your exotica surf music. It finds the ex-Sun City Girls gtr gawd playing with musicians with genuinely Middle Eastern names, like Rasheed Al-Qahira and Abdullah Basheem, and which is less of a Paul Simon move than it might seem. Though he doesn’t look it, Bishop himself is half Lebanese, his father a Druze, his boyhood musical influences split beween Rush, the Nuge, and his dad’s hookah-huffing jam pals.

For the last handful of years, Bishop was been touring as a solo, semi-improvising acoustic guitarist. The results were dazzling, but he got bored with the shtick and made a conscious decision to return to the electric, with all its pedals and noise and buzzing fun. Playing a hollow-body Gibson, and backed up by the Oakland band Oaxacan (whose drummer, Mike Guarino, was just the right kinda tight-ass experimentalist you want for metronomic instrumental grooves like this), Bishop lept like a mead-maddened gazelle through the album’s blend of originals, trad tunes, and covers of the sort of rock-trad visionaries, like Omar Souleyman, that Richard’s brother Al keeps putting out on Sublime Frequencies.

Many of the tunes approached the more Orientalist reaches of surf music, but from the other direction as it were. Call it sand music, flowing like dunes and getting grit in your eyes. Occasionally, the tempos grew slow and stoned. Once in a while Bishop stumbled before the demands of such rapidfire fretwork, but it was the first stop on the tour so stop your whining! The man spent the bulk of the evening reminding us once again of what a privilege it is to stand in a small club and enjoy one of the most imaginative unsung gtr gawds in these here States. Bishop is playful, driven, ironic, open to the elements, and masterful without polish or pride. Best of all, his playing possesses an element of witchiness, especially when he goes exotica like this, and weaves in a spectral vibe that stays with you long after the sounds fade, like temple incense still in your clothes when you get back to the sad hotel. 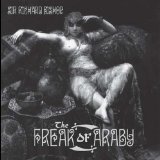