Erik Davis
Media News
• 8 years ago
publish
Check it out 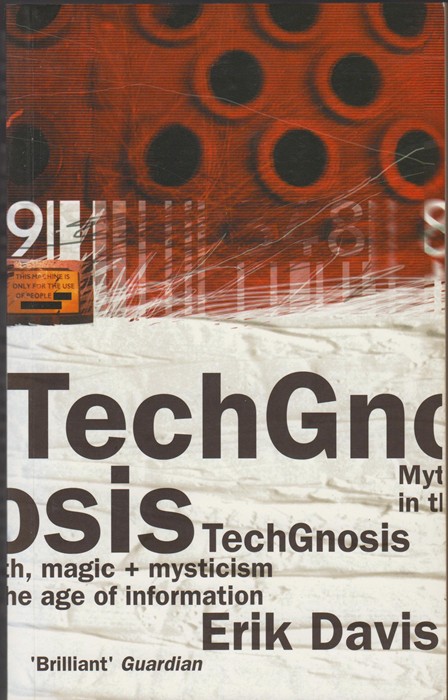 Steph Kretowicz spoke to me for Dazed Digital, and Rita Santillan made an awesome video to boot:

Dig deep into the world of cultural esoterica and you’re bound to find someone who’s dug there before. That’s particularly true of the cults of California and the mysticism of the global online, where Erik Davis has long laid claim. Cali-born and raised, the self-proclaimed “participant anthropologist” has been exploring the world of the weird since the 90s, in the process becoming a cult idol himself. Respected by many, virtually unknown by most, Davis is a journalist, academic and writer whose ‘multiperspectival’ mind generated The Visionary State and Techgnosis: Myth, Magic and Mysticism in the Age of Information. One, a coffee table book of essays and photos documenting the subcultures and belief systems rife in the west coast region where he still lives. The other, a classic media studies text, published in 1998 and evolved into a much-referenced, oft-updated website, techgnosis.com, investigating media, information transfer and conceptual engineering from a standpoint of universal human obsession.

Davis’ early days in music journalism ran from rock with Village Voice, Spin and The Rolling Stone in the early 90s, through to the miscellaneous arts explored in now-defunct cyberculture magazine, Mondo 2000 and Wired. It was in an article in the latter that he became one of the first to link techno music to a kind of neo-tribal ritualism, a transfer of the “imaginative interfaces” of Pagan mysticism to the, as yet, still niche networks of the digital world, in ‘TechnoPagans: May the astral plane be reborn in cyberspace’ in 1995.  He’s since expanded on that into rave-as-mass-ritual, uncovering the psychedelic trance (now known as ‘psy-trance’) in Goa, India, as early as the 90s, where Genesis P Orridge of Throbbing Gristle and Psychic TV described it as “facilitator of devotional experience” to Ibiza’s “horny disco”.

From there, Davis has shifted his focus on academic writing and anthropology along the way, even having a hand in a rock opera based on the famous Burning Man festival in San Francisco –which he both co-wrote and took part in as a snide narrating bunny rabbit –while being part of a cadres of writers who were instrumental in bringing science fiction writer Philip K Dick up from the underground of the 70s and 80s into the mainstream consciousness. “That was a really interesting moment,” Davis says, through Skype and across oceans, as he explains the impact of a particularly dynamic era in countercultural history, “that period of time was very right in the early-to-mid 90s, there was a lot of interpenetration of advanced philosophy and technological speculation; subcultures and a renewed interest in psychedelics. It was a time of a certain kind of pop consciousness avant-garde that had its zone before things became massified.”

To these ears, Davis may as well be talking about 2013. As both pioneer and propagator of a certain ‘cyber-idealism’, his recollections of a stoner youth in ‘Teen Head’, where he claims “altering perception alters the claims reality makes on you”, echoes a similar drive in contemporary net art. Here, opaque virtual identities disrupt and reclaim their autonomy in view of Facebook profiling, data collection and Google algorithms in the equally nebulous realms of #selfie art, Twitter performance and JunkSpace resistance. Coining terms like “mythinformation” and “cyberdelia”, Davis identified the computer as a tool of transgression long before the web was in widespread use; a kind of technoutopianism that still resonates today within the anarchic ideology of Anonymous Group, paranormal mediations of hauntology, even the distantly-related digito-mysticism of seapunk and vaporwave.

As an authority on obscure practices and beliefs too often disregarded as natural quirks, rather than the expressions of a greater human need for understanding they are, Davis was raised in a “liberal university surfer town” of San Diego County. He was lucky enough to be part of what he calls the “ambient spiritual weirdness” of a largely counter-cultural environment of the 80s, the San Francisco-based writer growing up in a milieu of hippy flee markets and Hare Krishna temples. It was a time and place still rooted in the aftershock of the 60s social revolution, and his broad interest in everything from Hindusim to cosmology, psychedelia, alien contactees and even a drive to exposing the pernicious psychobabble of Scientology, reflect that.

Although Davis deigns to make a direct connection between California –as home to contemporary Transhumanism, the Human Potential Movement and, of course, Sillicon Valley –there’s something to be said for the fact that the original source and contemporary resurgence of this sort of neo-Paganism is generally centered around it. Because, beyond the utopian desert raves and Grateful Deads of the past, to the Secret Circuits and Holly Herndons of the present, Davis says “there’s a little bit of the New Age in all of us online. In the sense that you’re comfortable with sharing connections through the mind, or through this sort of digital virtual reality, rather than physical reality. There’s something uncanny about how digital information works and that’s related to some of the ‘mediated mysticism’ that you associate with the New Age in California,” he says, adding that it’s no accident that some of the first major non-academic online communities –in fact, arguably the most major one, The WELL, (The Whole Earth ‘Lectronic Link), established as a dial-up bulletin board system in February 1985 –is a centrally Californian construction, even if people around the world took part in it. “But the fact that the first node of the internet was laid between Palo Alto and Los Angeles is not related to this. It doesn’t mean that the Internet is New Age, but there’s a sense for the engineered possibility of human consciousness; a kind of restless desire for novelty and new social possibilities that we can see in new technologies, as well as these spiritual, freaky, subcultures”.

That speaks to the power of the mind in constructing its own realities, and forming the basis of Davis’ work and, in some ways, ritual. “For me, the process of understanding and interpreting religion and spirituality is, I would say, also a spiritual practice,” he says, in describing his gnostic position, among his other private practices as a “lazy meditator” and Zen enthusiast. Such an open-minded outlook can only be unique to Davis’ background, as a self-described “heathen” from a US state that has, historically, stayed faithless. “California was seen as a kind of Pagan land by East Coast ministers. In just the same way that ministers would send missionary groups to foreign countries, they would also send them to the gold fields in Northern California,” Davis says about his home, “And it is a crazy place. Even in the late-19th century, the sexual culture in San Francisco was pretty out of hand.”

It’s perhaps his focus on “mediated mysticism” that resonates so strongly today in the days of the ubiquitous Online and, as someone who’d identified the power and peculiarity of technologies and networked media as far as the early 90s, Davis’ insight into some disturbing contemporary developments is invaluable. “One of the problems with our current cultural situation is that there’s a certain light vagueness to everything because the kinds of communities we have online, and the kinds of ways we can identify and re-identify ourselves through this increasingly weightless consumption, is that it becomes very boundariless,” he says while making the distinction between this kind of disembodied disengagement and the “multiple perspectival, nomadic” element of his own work and outlook. “What I’m talking about is not just drifting and having ‘multiple domains, man’ it’s much more of a commitment to a real engagement and real encounter with situations, with people, with texts. That’s what I think sets me apart from the more, kind of, facile ways of talking about postmodernism; where everyone has their own perspective, where there’s no ground, so you might as well just go to this or that website, that’s just not my style.”

So then, why a renewed public interest in these mystic realms of technology that Erik Davis has long specialised in? “It’s hard to say. I think things come round, and they come around with a difference, but there does seem to be an uptake in interest in matters spiritual when things get difficult, whether those things are drug experiences, of mysticism, or future visions of possible worlds. These things become, in a way, more appealing when things are challenging. So I think there is a resonance in a desire to return to a kind of utopian imagination, maybe something that’s a little more embodied this time. Because we’re all a bit wrangled by the degree of digital invasion in our lives.”