The Play-Doh of the Future, Here Today! 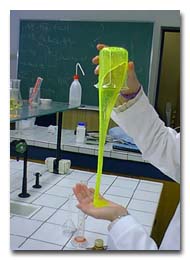 A glossy, violet glop is oozing through Magda Gross’s10-year-old fingers. “It feels like clams,” Magda says, holding a pendulous glob over a nearby minirecorder. “It doesn’t drip that easily.” With the air of a fifth-grade science whiz, she pads the clammy goo together and holds it next to my Sony. “Let’s see what it sounds like,” she says, shoving her fingers into the synthetic sludge. “Here’s the music!”

The source of the emission was not Magda’s intestinal tract but Gak, the latest pop virus to blaze through the pleasure circuits of America’s prepubescents. What is Gak? On the one hand, it is the latest mutation in the phylogenic line of kidgoop (Silly Putty/Flubber/Play-Doh, etc.), whose last evolutionary leap was Slime, that ’70s sticky green goo that came stuffed in plastic garbage cans. But the first known Gak sighting occurred not in toy stores but on televisionNickelodeon’s anarchic and messy Double Dare to be exact. There Gak smothered folks and grossed-out kids competing for prizes. Like Tribbles or Transformers, Gak is one of those odd things that are born and nurtured on TV before oozing through the tube into three-dimensional reality.

In fact, Gak may also be as virulent among adolescents as that fire-breathing, PBS-shilling purple doofus, Barney, is among tots. Last year Gak was Mattel’s best-selling product, and this year the company estimates it will sell eight million “splats”the air-tight plastic containers that package Gak. Teachers across the land, tipped off by the unusually animated expressions on their pupils’ faces, have snatched away their charges’ Gak, while some schools have simply banned the stuff. “That’s a good sign,” says John Handy, the head of the Mattel design team that spawned the glop. “If it’s so prevalent that they actually have to form a rule that you’re not allowed to bring it, then you know you’ve arrived.”

But unlike other kid fads like action figures or water pistols or noisemakers, Gak is as difficult to classify as its globular, shifting shapewhich is part of its appeal. Drooping the cool glop through your fingers, one cannot help but muse on its meanings. Toy? Compound? Food? Industrial by-product? Entity? Is it a solid or a liquid? Does it take a definite article? If you split your Gak in half are there two Gaks? Or is each splat a node in the great Gak Monad?

Magda has no interest in such questions. Like most kids, she’s an imaginative pragmatist, focusing not on Gak’s essence, but on its attributes. “Its squooshy and good to play with and you can throw it around and drip it.” She also notes that it smells like tempera paints, shakes like Jell-O, and hardens into clay if you leave it outside of its splat for too long.

Magda’s 13-year-old brother Tomek has been conducting research of his own. Employing experimental parameters appropriate to his age group, he threw Gak against the nearest vertical surface. “It doesn’t stick very well. It kinda flops up against the wall and falls off. Cafeteria food sticks much better.”

“Yah,” Magda chimes in. “You know the scrambled eggs that are actually made out of powder and you put water in them? If you touch those scrambled eggs it feels exactly like the Gak. I’m serious.” She pauses. “Except you can’t drip it as well.”

While Magda covers her face with a Gak pancake, Tomek drops the stuff on the floor to see how well it bounces. Then he demonstrates how you can rip Gak apart to make it resemble chunks of chicken meat. Tomek acquired his first splat of Gak with two Rice Crispies proof-of-purchase seals, but he swears the stuff dissolved, a mysterious process the boy links to the tiny clear crystals he found buried in the substance. “They’re kinda hard to find. I was taking them out because I thought they weren’t supposed to be there. And the gak got smaller. It would, like, shrink.” So in order to prove his hypothesis, Tomek starts picking out the crystals and putting Gak back in its splat and eyeing the change. “It’s definitely getting smaller,” he insists. “It’s really annoying. This is a gyp.”

Magda gets the experimental urge, and leans towards the cassette recorder to record her protocol. “I’m putting an ice cube in the middle of Gak. We’re going to wrap it around. I’m holding it.” She waits a minute and then unfurls the glop. “It melted a little and the water sorta sank into it.” She probes the surface with her finger. “Ewwww!”

In A Thousand Plateaus, the French theorists Deleuze and Guattari’s technical manual of conceptual mutation, the authors direct our attention towards the importance of “destratified, deterritorialized matter.” This mode of matter “is not to be confused either with an intelligible, formal essentiality or a sensible, formed and perceived, thinghood.” Destratified matter is always deforming, passing to a limit, changing state between solid and liquid. Such matter propagates itself through what D & G call “the machinic phylum,” a nomadic space that is “matter in movement, in flux, in variation.”

D & G were anticipating Gak. For Gak too is nothing less than a plastic machine through which matter probes its own fluid possibilities. While it vaguely resembles fake vomit, Gak cares nothing for simulacra or the easy metaphors of Slime, whose name and trash-can packaging gave the substance a specific identity. Gak is metamatter, a gooey question mark, an ontological murk. It is at once the primal ooze and the apocalyptic SF Blob. We can only impose ourselves on it so much, after which point we can only follow its flows (or its oozes).

Kids dig this because Gak, like Warner Bros. cartoons, suggests that the laws that govern physical reality are malleable. This accounts for the experimental dimension of so much Gak play, for Gak incites an exploratory urge that combines the joy of mud puddles with the scientist’s clinical investigations. One of Gak’s most popular featuresthe noises it makes when you cram your fingers into a full splatwas discovered by kids, not by Mattel. Now the most-asked question on the company’s 800 number is how to make Gak fart.

Of course Gak also conjures up weird science because the stuff looks like it crawled out of a Chernobyl swamp or a galactic meteorite. And, according to a recent Scientific American article, researchers are beginning to develop “intelligent gels”polymer substances that shrink and expand in response to specific changes in their environment with the precision of machines, converting chemical energy into mechanical work. Gak, too, is a product of science, but of a very peculiar sort. Whereas goofy foods like Gummy Bears, Jell-O, bubblegum, and marshmallows share Gak’s aesthetic, and Nickelodean’s original Gak was reportedly a kind of rancid pudding, Gak is not a food but a lab compound. Besides designer drugs, Gak is one of the few substances on earth invented by scientists driven neither by the joys of pure research or strict utilitarian goals (excluding the bottom line, that is). Mattel’s chemists were driven by the search for fun.

Not surprisingly, the company is being very James Bond about Gak’s chemical composition, and their in-house chemists are shrouded in secrecy. But independent research conducted not by The Village Voice but by The Washington Post reveals that Gak is composed primarily of acrylic (a thickener which holds Gak’s considerable moisture inside) and silicone (which accounts for the stuff’s airtight stretchiness as well as, presumably, its jiggle). Mattel spokesmen will not confirm this information but did admit that Gak’s chilly feelespecially noticeable when the stuff is stretched across the roomwas due to evaporation. Though company officials claim that what they call “those amazing little crystals” are an inconsequential by-product of Gak’s principle elements, the possibilities that Gak is powered by the resonant frequencies of those crystals cannot be dismissed out of hand.

The most significant thing about Gak’s composition is that, like us, the stuff is made up mostly of waterabout 80 percent. This sets up a very powerful tactile empathy between our bodies and Gak. “It’s one of the things that makes it feel so alive,” says Mattel’s John Handy. More importantly, it makes us feel a little like Gak. Not that we’re violet (or green or orange) or smell like finger paints, but that our bodies too are in some mysterious way as malleable as a T2 morph.
Perhaps this corporeal empathy explains an aspect of Gak that is almost unique among toys: Boys and girls play with the stuff in identical fashion. It seems as if Gak catalyzes a body that eludes strict codes like gender. While this body is in some sense an infantile corpus of pure sensations, it is also the emergent body conjured up by yoga students, dancers, clever hedonists, and practitioners of certain alchemical arts.

For if Gak takes us back to our primal sensations, so too does Gak take the science of chemistry back to the primal metaphysical ooze of alchemy. Conventional history has it that the alchemists’ most cherished goal, the Philosopher’s Stone, allowed them to transmute lead into gold. But in more esoteric terms, the Stone was imagined as the mercurial soul of the Earth itself, as well as the alchemists’ own magically transformed bodies. The Lapis philosophorum was the original metamatter.

It’s easy to make the analogy that Gak has become the TV-toy industry’s Philosopher’s Stone, turning goop into gold. But perhaps there’s a deeper connection as well. In his play The Alchemist, Ben Johnson described the Lapis in strangely familiar terms:

Tis a stone and not,
A stone; a spirit, a soul, and a body,
Which if you do dissolve it, it is dissolv’d,
If you coagulate it, it is coagulated,
If you make it fly, it flieth.