Ken Hollings' hallucinates the history of the late 40s and 50s 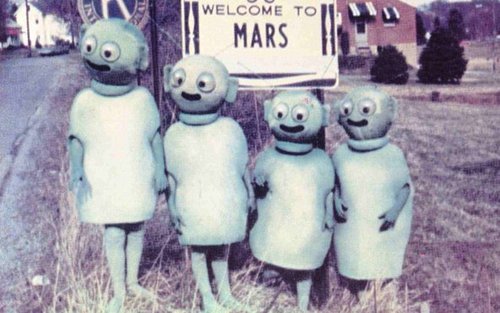 The following is the foreward to Ken Hollings’ terrific recent book Welcome to Mars. A hidden history of the postwar imaginary, Hollings’ book unearths the circuits of technology and consciousness that still shape our world: UFOs, psychoactives, cybernetics, interior design, military tech, cinema. Hollings is an ace researcher, but the way he compiles his material is even better: a dense but delicious fever dream of historical and mythic correspondences. It’s got pretty black and white pictures too.

The year of 1945 was a crossroads year, one of those rare junctures in the flow of history where everything seems to change. The world before Hiroshima is a distant, black-and-white place, a gone world whose artifacts have the ghostly air of Victrolas or the faded photographs of distant relatives. On the other hand, the decade or so that follows the war, which is the subject of the hallucinatory history you now hold, is an altogether more recognizable environment. Even from today’s perspective, which follows the 60s, and the fall of the Berlin wall, and 9-11, the immediate postwar era—the politics, culture, and perhaps most of all the gadgetry of the late 40s and 1950s—are all somehow familiar, sometimes uncannily so. The era’s artifacts are less like the photographs of departed relatives than hazy magnetic recordings our own earliest memories—partly fantasized, partly opaque, a feedback loop of dream and trauma.

The end of World War II unleashed powerful and genuinely new forces onto the world stage, as concepts and technologies developed in the heat of wartime leaked into and transformed secular society. The war had destroyed enough older structures and traditions to make plenty of room for this new phase of global culture, just as the rubble of bombed-out Rotterdam made space for all that city’s odd and marvelous New Building experiments to fill. But of course, Europe was not to be the birthplace of this new phase—that honor goes to America, who would dominate the last half of the twentieth century with its pop culture, its machines, its ideologies. Though we are far from bobby sox and The Lone Ranger, postwar America lay the foundations of our world: our mindscape, our media, our technological myths.

It is no accident that Thomas Pynchon set Gravity’s Rainbow, perhaps the most prophetic American novel of the last fifty years, in the immediate aftermath of World War II. Pynchon used the word “the Zone” to describe the fluid and borderless space of occupied Germany following VE day, but the term also could be said to describe the fluid and unmapped postwar world that is the deeper subject of the novel. Early in the novel, Pynchon offers us a key to navigating this larger Zone. During a séance, the directors of the German cartel IG Farben contact the departed spirit named Walter Rathenau, who tells them how to read the signs that will enable them to understand the new world system:

These signs are real. They are also symptoms of a process…to apprehend it you will follow the signs. All talk of cause and effect is secular history, and secular history is a diversionary tactic…If you want the truth—I know I presume—you must look into the technology of these matters. Even into the hearts of certain molecules…You must ask two questions. First, what is the real nature of synthesis? And then: what is the real nature of control?

Welcome to Mars is a map of the postwar Zone, a nonfiction Gravity’s Rainbow that follows the arc of Germany’s V2 rocket to the end of the rainbow—in other words, to America. To tell his tale, Hollings takes Rathenau’s prophetic suggestions to heart. To begin with, Hollings has collected together a mass of real signs and symptoms drawn from a myriad of fields: suburban architecture, psychology, Hollywood B-movies, military history, cybernetics, flying saucer lore. At first these items may seem disjointed, almost scatter-shot, but the networks they form together reflect the profoundly interconnected process that characterizes the Zone, a place where televisions deliver electroshock therapy and UFOs pop out of microwave ovens. Applying a dream logic to real events, treating pulp fictions as history, and history as myth, Hollings ignores the conventional logic of cause and effect that you find in most nonfiction books about the past. Instead, he coaxes us into the process by drawing us into an associational network of facts and figures that both mirrors and manifests the deeper labyrinth.

Hollings has looked into the technology of these matters as well, and not just the gadgetry and synthetic molecules that transforms domestic space and media culture. He has also looked deeply at the UFO, an apparatus whose very status as a technology is both dreamlike and deeply mediated through Hollywood and pulp magazines. He groks that postwar technology is not just about the machines but about the assemblage—the system—that connects reason to the unconscious, human beings to machines, and how those connections increasingly constitute society. The cybernetic cycles unleashed by this emerging system of relay links and feedback loops is perhaps the key expression of Herr Rathenau’s “process,” and it directly foregrounds today’s network society. As Hollings plays connect the dots between monster movies, nuclear submarines, and LSD, between Sputnik and brainwashing and TV dinners, he is tracing the wires of our own unconscious, the electronic ether that we breathe.

The nonlinear leaps and patterns in this text are a way of probing the first question. What are the deep patterns that connect Thorazine and magnetic tape, Forbidden Planet and Scientology? To answer the question, you must let go of the cause and effect links that keep us chained to the diversionary tactic of secular history, and plunge into the process. And don’t try to hold onto all these amazing human characters as you move forward, because just as Pynchon evaporates his main character halfway through his book, Hollings invites us to follow the webs between human beings more than the beings themselves (who may of course be brainwashed robots, or pod people).

But even more important is Rathenau’s second question, because it cuts to the heart of our present “posthuman” predicament. The cybernetic loops that characterize the Zone are all about control, but who controls the controller? When we decide that our minds are like magnetic tape, that they can be erased and reprogrammed, who makes the decision, who presses rewind? And when we put all our eggs in the expanding cybernetic basket of cybernetic controls, what do we do with the paradox that the system itself is out of control? Perhaps the atomic tests of 1945—or even the discovery of Nag Hammadi’s great gnostic library, as Philip K. Dick believed—set off a chain reaction in reality itself, and LSD and Dianetics and Robby the Robot are all telling us the same thing, a message we still haven’t really processed: Welcome to Mars.