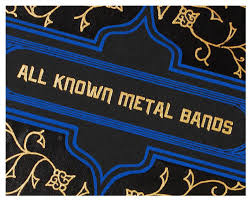 This has been a media-centric holiday shopping season, meaning that I mostly stuck to gifting books, DVDs, and music. By far the most sparkling item I stumbled across during the hunt was Dan Nelson’s All Known Metal Bands, a smart, gorgeous, and exotic object that achieves the ideal of all metal discourse: a loving but  ambivalent mixture of  power and perversity, the heavy and the ridiculous, high brow and low.

The concept is strong, and perfectly executed: Palmer collected the names of over 52, 000 bands that could be arguably characters as metal, and listed those in alphabetical order, with Gothic illustrated capital letters, a la William Morris, announcing each of the 26 sections. With the exception of a brief essay at the end, that’s it. When multiple bands have adopted the same name—there are over fifteen Demogorgons alone, and twenty Genocides—every instance of the name is listed. What results is an archive-poem, a compendium of a genre’s imaginings:

The book was released by McSweeney’s, whose products I admire but often find too self-confidently hip, which is perhaps just a way of admitting that their historicist, graphically-arresting tastiness is frightfully well-aimed at my own demographic sensibility. But in this case, they have crafted a marvelous thing. The weird dimensions of the book (10 x 6 long), the embossed Victoriana boards, the obscure AKMB on the spine, the silvery type set against black pages—all suggest a lexical grimoire that demands, not just to be read, but to be intoned.

Almost all of Nelson’s information, of course, is available online, especially at the fierce and amazing Encyclopaedia Metallum, which, among much else, lists tens of thousands of bands by letter. Nelson claims he had spent six months assembling his list before he stumbled upon the site, and apologizes for not acknowledging the site in his notes. But Nelson still gets the conceptual art score, and the concept asks us to read the lists themselves more intensely than the website does, to appreciate what Brian Eno would call the “scenius” of metal’s immensely complex realm.

One result, even for unironic lovers of the genre, is hilarity: my days have been measurably improved by the discovery that certain band names—Carnal Leftovers, Celtic Buttfuck, Impious Havoc, Flight of the Jesus Dog—actually exist. A bunch of guys sat around a room drinking beer one night and one guy said “I know: Forced Vomit!” or “How about Dark Cold Demons Blood?” and the others all went: “Yaah” or “Ja!” or “Si” or whatever. I love that.

Poetically, AKMB drips with a twilit romanticism that rots before our eyes into nihilism and anality. Perusing these pages, we scan a fabric of barbarous exotica (Urghar Moork), hermeticism (Gematria), exotic violence (Cock and Bull Torture) and visionary pulp (Under Fetid Corpses). There is much lore in here as well. When I looked up popular names I didn’t recognize, I invariably uncovered some interesting nugget of esoterica: Gehenna (ten acts of various spellings) is a Hebrew word we translate as hell, but is separate from sheol; Ignis Fatuus (six bands) is the latin name for will-o’-the-wisp. Gathered together, these names reflect the almost insectoid pressure of repetition and permutation. Three Carpe Diems, for example, are followed by Carpe Diem Envy—a story in itself.

But what comes through, in the end, is not so much the meaning and play of the individual entries, but the sheer multiplicity of the metal universe, with its planetary myriad of bands, scenes, and subgenre. A single cricket in a box is cute; three or four are interesting. But a thousand is pretty fucking creepy. Even massed butterflies can be disturbing. Recall the final scene of the forgettable The Matrix Revolutions, when hordes of burrowing Sentinels attack Zion. The repulsive “wrongness” of the Sentinels had less to do with their tentacled robotic swagger than with the iterative intensity of their replication, their repetition-with-a-difference, their too-muchness. AKMB unleashes something similar: the language of metal becomes a howling horde, beyond reason or taste, but also programmatic and technical: an infernal index to the protean nomenclature of the abyss.