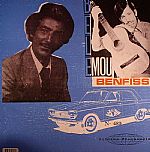 I always get something out of listening to the records released by Sublime Frequencies, the outsider world music label spearheaded by former Sun City Girl Alan Bishop. Even the records I don’t particularly enjoy listening to—and there are a few—always expand my world. These releases have also taken a vague suspicion of mine and congealed it into conviction. The suspicion is that, outside of self-consciously traditional styles, the freshest and most interesting era for recordings of popular music outside the Western world are the 1960s and 70s. This period begins at a time when the global cross-cultural transmission of music through LPs and radio really starts to grow feverish. Moving into the global beat stream earlier ruled by Cuba and jazz, the spreading spunk of R&B and rock’n’roll mutates the energy and attitude of non-western popular music, adding urge overkill to such music’s polyglot attempt to balance rural roots with the urban experience. This riotous period ends—IMO—with the spread of cheap synthesizers and drum machines, after which many precious things evaporate like dew.

This period of the “electric analog” is a kind of sweet spot of global hybridity. It is neither the Papa Bear of tradition nor the Mama Bear of slavishly synthetic global mimicry and quotation; like Baby Bear, it was just right. It is made by young musicians navigating their country’s unique version of modernity, which is everywhere different and everywhere the same, but at that time was not yet the planetary media mall we have today. These musicians had one foot in local—if changing—styles, both rural and urban, and another foot encased in Elvis shoes or gogo boots. This is the world of rock steady and ska, of Congolese rumba-rock, of R.D. Burman’s delirious Bollywood soundtracks, of Tropicalismo and Indonesian psychedelic funk. While I have a tremendous respect and love of earlier ethno recordings of the 20s and 30s—the cabaret jazz from Istanbul cannot be beat!—it is these more deeply mutant and hormone-infused sides that spike my veins with pop juice and joy.

Sublime’s latest disc, the awkwardly if declaratively named 1970’s’ Algerian Proto-Rai Underground, is more ammo for my Morricone guns. A collection of eight songs pressed in Algeria in the 1970s, the album showcases an apparently neglected period between the emergence of urban Bedouin pop—characterized, the notes explain, by the “gasba flute”—and the launch of rai music in the 1980s. In the 70s, the flute was replaced with the trumpet, which, along with the accordion and derbouka drums, helps create some of the punchiest and mellifluous dance-worthy exotica I have heard in a while. Most of the songs have an invariant pulse, creating trance grooves while the trumpet and the singer trade off catchy melodies that keep recurring. Towards the end of Groupe El Azhar’s tune “Touedar Aakli,” which means “My Reason is Lost,” someone ululates, and it sounds like a Robert Fripp solo or Roger Waters screaming in “Careful with that Ax Eugene.” But the best stuff is on side two, where Boutaiba Sghir—who is sporting a find ‘stache in the included photo—adds more emotional layers with his rich baritone, especially on the ballad “Malgre Tout,” whose heart-rending melody swirls and reverberates, over and over again, at once nostalgic and hungry, like all music of the heart.