Erik Davis
Esoterica
• 14 years ago
publish
Check it out

A Cow Jumped Over the Moon 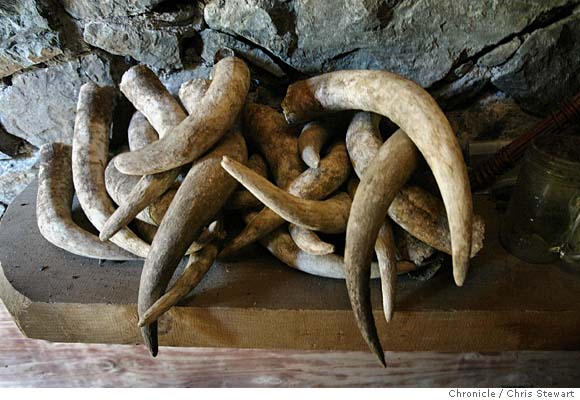 A decade or so ago, I was spending a lot of time at a Northern California Zen Center that also trained organic farmers. One day I was talking to this one fellow about the difference between organic and Biodynamic farming, and he explained that, in addition to various techniques of crop rotation and pest control, Biodynamic farmers track the positions of the moon and other planets so as to time their planting and harvesting according to astrological conditions. Woah. Even more surprising was the fellow’s somewhat sheepish admission that Biodynamic growers use the horns of a bull slaughtered at the fall equinox to prepare various dilute concoctions that are shared among different farms, which use the almost homeopathic preparations to aid composting and improve the quality of the soil. He added that usually the mightiest bulls were chosen, because they had the most power.

As a lover of occulture, I thought all this was just plumb-dandy. If I hadn’t been at the Zen Center, I would have scampered out to buy some Biodynamic chardonnay then and there. As a sometimes journalist, I also immediately saw the possibility of an alternative weekly scoop: Occult Forces Grew Your Parsnips. Even Whole Food types would have their minds blown.

But the more I talked with the fellow about the Biodynamic community, the more I realized that it would be very difficult to tell the story the way I would want to. Having written lots of journalism about spiritual subcultures, I was familiar with the editorial pressures, subtle on overt, to mock peculiar practices or to castigate believers for unscientific beliefs. I worked hard to create balanced portrayals that would neither whitewash the weirdness or mock from on high, and felt I could do the story justice. While squeezing some fun out of the peculiarity of these practices, I believed I could write something anthropologically sensitive, a piece that would celebrate the spiritual imagination and the sacred dimension that organic agriculture has for many of its practitioners.

On further reflection, however, I realized that even if I could write the piece the way I wanted to, the information itself would probably not make the lives of Biodynamic producers any easier. Even though astrology remains pervasive in popular culture and individual lives, revelations about moon forces and cow magic would fall on too many ears closed to the spirit. In the words of my old pal Dan Levy, it would not be “good for the Jews.” So I preferred to just be in on the secret, and to let the esoteric remain where it feels most at home: in the shadows.

So imagine my peculiar emotions when, ten years later, I encountered the cover story of this week’s SF Weekly. “Voodoo on the Vine” went the coverline, emblazoned in a ye olde font over a bunch of grapes and a pair of horns poked with needles. “Biondyamics – The Next Big Thing in Green Winemaking – is Fermented with Dead Animals and the Occult.” Here, ten years of Biodynamic growth done the line, was the story I wanted to research, but definitely not the story I wanted to write.

The journalist, a humorless and pedestrian thinker named Joe Eskenazi, did about as much of the surface homework as you can expect an alt-weekly stringer, but the tone and argument of the piece was the same old non-alternative story: a snide, accusatory, one-dimensional “expose” of the occult dimension of Biodynamic Farming and its founder, Rudolph Steiner, a brilliant Austrian philosopher-mystic possessed of many an unfamiliar notion. (The fact that Steiner influenced scores of top name modernists and also pulled the highly-regarded Waldorf educational method out of the ether was not deemed worthy of mention.) Playing the “I am a lapdog of science” routine, Eskenazi exposes Steiner and his methods to be non-magical bullshit. Eskenazi then performs some of that public service for which alt-journalism is renowned by questioning the higher prices that Biodynamic wines fetch in relation to their merely organic cousins.

It’s still an interesting story. I enjoyed hearing retailers and owners of tony wine bars splutter when asked about the spooky stuff, and I was happy to see a number of producers stand up and explain why they embrace Biodynamic principles. That said, Steiner was definitely a deeply wacky guy whose Biodynamic claims do not hold much water from the perspective of astronomy or the science of cow decomposition. Eskenazi is right to poke fun of the language of a lot of Biondyamic promotional literature, as the producers attempt to muddle around the fact that their methods are animated by an esoteric current that has no official sanction in the modern world.

What blows me away though is how badly journalists write about spirituality and spiritual worldviews. “Voodoo”? Come on guys, even Hollywood knows that means an African legacy, not a Paracelsian one like this. And don’t talk to me about science: talk to me about culture and history and the imagination, and how these things shape our relationship to the earth, especially at a time when that relationship is under such heavy and much needed reconfiguring. I mean really, folks, what is more interesting? High school physics reminders about the miniscule tidal forces emanating from the moon? Or the fact that our society’s stumbling, and somewhat last-ditch embrace of organic food production is enlivened in some parts with a mystically organic worldview as well?

This organic world-view is not science, but it is a poem of science, one that resonates with ancient and hidden networks of sympathy that link our ordinary world with cosmic forces. Those links may be fictions, but fictions are alive, and mark the world in a myriad ways, especially when they are as ancient as these. Within this literally esoteric network, meanings proliferate, reflect, and alchemically combine. As above, so below. From that perspective, it is hardly accidental that Eskenazi’s revelation about Biodynamic occultism is not about rutabagas but wine: a soul-enriching Dionysian delight that remains one of the most refined and spiritually symbolic agricultural products in the history of the planet. Good wine is a poem of the earth, or of humanity’s devotion to earth. Of course such a poem remains infused by gods.