Online after the Oklahoma Bombing 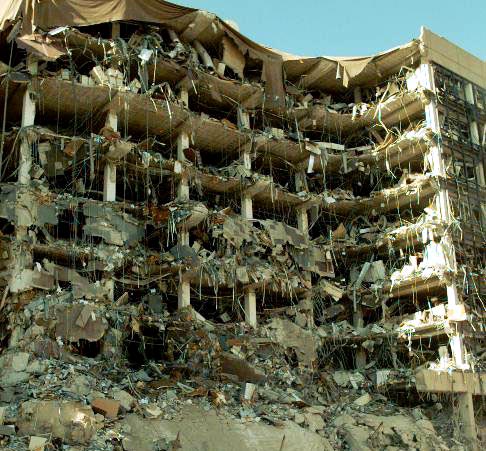 Originally appeared in The Village Voice, May 2, 1995

As one message on an Internet newsgroup devoted to explosives put it, “There
are a lot of unstable compounds out there.” The writer was responding to a naif
surprised that a bunch of fertilizer and some diesel fuel could rip the side
off a nine-story building. But the man could have been talking about the
rhetoric of Net politics itself. Long a fertile ground for anarchist and
antiauthoritarian thought, Net political culture also includes heaps of
reactionary conspiracy theory, racist patriotism, weapons fetishism and bitter,
seething resentment against the federal government. It may not be an
ideological bomb waiting to go off, but the Net’s right wing certainly piles up
some inflammable crap.

Last Friday, a goofball post appeared on alt.current-events.amfb- explosion, a
newsgroup created for discussion of the bombing of the Albert Murrah Federal
Building in Oklahoma City. It was the America On-Line user profile of a Decker,
Michigan resident named “Timothy McVeigh,” whose hobby was “organic bombs” and
whose occupation was “Mad Bomber.” Clearly a hoax (though a few news outlets
took the bait), the post nonetheless highlights how modems are supplementing
talk radio as the right’s communications fetish of choice. Scores of
reactionary BBSes dot the land, including the Paul Revere Network, which
emulates the original “Freedom Fighter” as they “ride” the telecommunications
lines. The Internet offers mailing lists like Texas-Gun-Owners, WACO-DISCUSS
and michigun; ftp sites of constitutional and Christian Identity lit; furtive
white supremacist chatlines; World Wide Web militia pages; and
Usenet newsgroups like misc.activism.militia, alt.skinheads and
talk.politics.guns. Even mainstream services like Compuserve and America Online
cater in part to Patriots and Aryan Nationalists.

Of course, generalizing about “the right’s” anti-authoritarian fringe is
difficult enough, and the Net’s polyvocality only makes things murkier. Most of
the online Oklahoma discussions I lurked about included perfectly decent
reactionaries who were level-headed enough to condemn the blast as well as the
unnecessary deaths of the Branch Davidian kids two years ago. Other condolences
were savagely bent, like this beauty I scraped from
alt.politics.nationalist.white: “It’s a real injustice that White children had
to be injured and killed in this attack on the ZOG’s [Zionist Occupation
Government] Okla H.Q.” At least in the more public forums, the hardcore kooks
and bigots were generally shouted down by more sober compadres or by zealous
watchdogs hurling flames from across the ideological divide.

As one fellow put it, reading Usenet at times like this is like “picking a
scab.” Taken individually, many of the posts were just the angry, ignorant, or
sad barkings of ordinary men and women. But collectively they took on the dark
obsessive drone of a fever dream. Charged with emotions bordering on atavism
and whipped up by the unholy speed of information exchange, a host of demons,
fetishes and vengeful archetypes crawl onstage straight from white America’s
political unconscious.

The general discussion newsgroup alt.current-events.amfb-explosion had barely
been created when threads like “Probably a towel-head” and “BOYCOTT ARABS”
first appeared. At the same time, the “Please, don’t cry for the BATF” thread
reminded folks of the scab that continues to bleed: the federal government’s
monstrous and unjustified attack on the Branch Davidians two years ago, the
Alamo obsessively remembered by many a militiaman. Even if the towel-heads did
it, it seemed, the BATF had their karma coming.

Then the police sketches of the skinhead and the tattooed jarhead hit the TV
screens, and it was payback time. “You folks are even dumber than I thought,”
exclaimed one contrary visitor to alt.politics.nationalist.white. Some
reasonable militia folk squirmed like stuck worms as they tried to distance
themselves from extremists whose underlying ideological motivations they
probably shared. But whatever potential pleasure lay in the prospect of
Patriots eating crow or even boycotting themselves was crushed by the
self-justifying might of their paranoia. The looniest material was on
alt.conspiracy, nestled amidst the endless debates about estrogen in the water
supply, FDR and the insididous symbology of dollar bills and Coke cans. Humor
is not entirely lacking on alt.conspiracyone person figured that fertilizers
and diesel fuel and Oklahoma City added up to “Disgruntled FARMERS.” But it was
here that the bomb’s fever-dream really began to sweat.

Many blamed the blast on Clinton and the Feds, who clearly had the most to gain
from the event. (Tim McVeigh is a patsy of course, his head already in the
sights of some Jack Ruby.) The State’s motive? Demonize and discredit Patriots,
the militia movement, Newt, even home schoolers, while continuing to roll back
personal freedoms at the behest of the New World Order waiting in the wings.
The historical parallel of choice was the Reichstag Fire, named for the German
capitol building that many believe the Nazis burned down and then blamed the
Communists. (It’s one of the great ironies of white supremacist culture that
militia types occasioanally compare the tactics of the New World Order to the
Nazis). Whole scenarios scrolled up my screen like the apocalyptic prophecies
they were, visions of roadblocks and Internet shut-downs and confiscated
weapons and invasions of UN troops. “Our only assets will be mobility,
dispersion and our ability to hide,” wrote one weekend warrior. These folks
love to feel prepared, like Boy Scouts with their ears cocked for Gabriels’
final trumpet.

For an outsider, these hypnogogic clusters of factoids and rumours and
fantasies all manage to crack through the emtionally manipulative gloss of the
mainstream media, highlighting the ominous ambiguities that always accompany
major political spectacles. As one alt.conspiracist put it, “My method: ingest
ALL data, making sure to get info from ‘respectable’ sources AND the ‘lunatic
fringe.’ Then digest. Eventually, patterns will appear. That’s the best we can
do.” So here’s some munchies: That Fort Riley, where McVeich, Nichols and David
Iniguez were all stationed, has the highest incidence of suicide, homicide and
desertion of any US military base. That BATF received tips before the bombing.
That no BATF officers died in the blast. That Oklahoma sounds a lot like
Yokohama. That two old Waco hands are on board on the investigationFBI’s Bob
Ricks and FEMA’s Buddy Young. That the second seismographic blip could not have
been the floors pancaking. That CNN sure concocted its theme music pretty fast.
That it all happened pretty fast. That Nostradamus predicted it. That
black, unmarked helicopters fluttered about the Murrah building just seconds
before the explosion.

These mysterious black choppers are the UFOs of the right-wing militias. Like
the mysterious “Men in Black” of UFO lore, the black helicopters are paranormal
manifestations of federal power. Unmarked government helicopters certainly
exist, as do mysterious and manipulative federal agents, but the black copters
remind us that many fringe miltiamen do not just have a different world-view
than your average Joe. They have in many ways planted their flag into another
world altogether, a world governed by the impregnable logic of conspiracy, by
uncorked fear and loathing, by symbolic synchronicities (the date of April 19th
resonates with the siege on Randy Weaver’s residence, Waco, Lexington-Concord,
and the execution of white supremacist Richard Snell, and is the day before
Hitler’s birthday), and by living fictions (the celebrated underground white
supremacist novel The Turner Diaries describes a fictional truck bombing
of FBI headquarters using an ammonium nitrate bomb detonated at 9:15 a.m).

But paranoia is an omniverous thing, and there are constellations of truth in
its webs no matter how delirous the overall design. Even as early as Thursday,
when TV was still talking about Jordanians, a number of online conservatives
predicted that the militias would be blamed for the blast. “Based upon passed
[sic] performance, it is legitimate to wonder about our friends in DC,” wrote
one kook, and who could disagree? Though they see conspiracies where more sober
observers only see the government’s boundless ability to take advantage of
events, these folks are absolutely correct that the fear generated by the
Oklahoma bombing will be cynically manipulated by a regime desperate to further
consolidate and extend its control in the name of antiterrorism.

If Waco demonstrated how the lack of dialogue between two competing and
mutually self-fulfilling world-viewsDavid Koresh’s end-times scenario and the
BATF’s and FBI’s only slightly less giddy lust for controlleads to tragedy,
the Oklahoma blast proves that the confrontation between the paramilitary
paradigm and the federal government may be even more disasterous. These
prophetic scripts have long polarized the heart of Americaindividual versus
community, wilderness versus garden, freedom versus orderand now they’re
ripping it apart.

The right wing’s seccession from the social is aided and abetted by the
much-touted anarchy of the Net, because computer telecommunications help
replace mainstream consensus reality with a dizzying array of highly networked
subcultural virtual realities. How these tribal world-views interface with the
real world is a sorely vexed question, one we’re sure to visit in the ensuing
weeks, when the Netalready weathering an anti-pornography assault by the
Senatewill be put into the sizzler. Federal control freaks and political
scapegoaters may call for restrictions on dangerous data like bomb recipes.
This will call up the inevitable libertarians, tanked on the pure oxygen of
First Amendment enthusiasm, arguing that “Information doesn’t kill people,
people kill people”.

They’re both wrong. No-one knows where people stop and information begins.
Datastreams and impassioned rhetoric are some of the perceptual feedback loops
that compose human beings, and feedback loops can spin out of control. On
Nightline, a scraggly and furtive neighbor of James Nichols named Phil
Marowski mentioned Day 51, a recent Waco documentary that savages the
government, and described how folks with Tim McVeigh’s pissed-off mind-set
could watch it over and over again. “Half the time you’re watching Day
51, and half the time you’re talking about it with your closed group at
gunshows or wherever. Something’s gonna blow.”