The return of Julian Jaynes 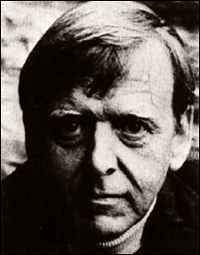 Tucson, Arizona. The bi-annual conference Toward a Science of Consciousness takes place this year in a downtown conference center pleasantly landscaped with palm trees, barrel cactus, bubbling fountains, and Dr. Seuss sorta adobe. The gathering draws philosophers, neuroscientists, psychonauts, headshrinkers, and hardcore nerds in tie-dye. A large percentage of these are characters are graying white men, and a significant percentage of these have pony tails. There are also some New Age ladies and a couple guys who look like bikers, including David Chalmers, the Australian powerhouse who co-founded the conference years ago. Strangest by far is a posse of a dozen or so Swiss characters dressed all in black who stride around grim and determined like the Nihilists in The Big Lebkowski. In the center of the pack walks the single female, her eyes blazing with apocalyptic intensity, her painted eyebrows invoking Cleopatra.

During one of the pre-conference workshop, I sat for four hours and heard two guys named Brian McVeigh and Marcel Kuijsten go on about Julian Jaynes, who published The Origin Consciousness in the Breakdown of the Bicameral Mind in 1976 and died in 1997 without publishing a followup. Like James Gleick’s Chaos or Hofstader’s Gödel, Escher, Bach, Jaynes’ book became a “big think” tome widely read by heads of all types. The book was regularly spotted along the used bookshelves I scanned as a seeker kid, its cultural authority seemingly having faded as thoroughly as the lettering as the spine.

I finally read the book a decade or so ago and dug it. Jaynes’ basic idea is that until around 1200 BC, at least in the West, the two hemispheres of the human brain—which are only connected by the narrowest of channels—were not yet integrated into the singular, self-directed, interior consciousness that we are familiar with (or at least I am, I don’t know about you zombies!). In the place of this interiority, Jaynes argued, the ancient mind was bicameral, which means dual chambered. Decisions arose in the right hemisphere of the brain but were perceived by the left hemisphere, where the person resided, as external commands. This is the origin of the widespread phenomenon of hearing the voice from the gods. Folks back then literally did not “think for themselves.”

Jaynes based a lot of his speculations on literature, and particularly on the Iliad, where there is little evidence of interiority, or internal “conscious” decision making. Instead the gods order everyone around. By the time of the Odyssey, however, there has already been a fundamental shift in the evolution of consciousness, Jaynes notes, as characters sneak around, scheme, and try to outwit the gods. Jaynes explains this by saying that, as society grew more complex, the voices of the gods didn’t cut it any more, and the bicameral mind broke down. The voices became another dimension of an emerging operational self that made decisions within an internal “psychoscape” where various promptings could be evaluated, questioned, and weighed.

I found Jaynes persuasive. He’s sensitive to literary sources and the vagaries of visionary experience, while sticking to a psychological materialism account that still acknowledges their phenomenological power and weirdness of what we would now consider a kind of mystic or possession experience. Still, I thought that today, in the era of PET scans and microtubules, his book would now be considered pretty dusty stuff, like the holographic theory that once wowed the head set in the early 1980s and has now effectively evaporated.

McVeigh and Kuijsten suggested otherwise. Most of their discussion centered on residual traces of the bicameral mind, such as spirit possession, hypnosis, the “primitive mind,” and other outsider phenomena. The most convincing evidence involved auditory hallucinations, which are far more common then earlier thought, especially among people who are otherwise not behaving like psychos (including kids). As for full-on schizophrenics, Kuijsten pointed out that their auditory hallucinations are often commands, and that there is a strong correlation between the emergence of the voices and the sorts of stress situations where decisions are born.

There is some neurological evidence as well. A few PET studies of auditory hallucinations show signals emerging from the right temporal lobe and triggering activity in the left auditory cortex. What makes these studies even more intriguing is the fact that right temporal lobe activity has been linked with religious experience and behavior. In 1970, one psychologist documented six cases of temporal lobe epilepsy leading to “sudden religious conversions;” more recently, Vilayanur Ramachandran has described a “temporal lobe personality” drawn to religious matters, while the Canadian mad scientist Michael Persinger claims to generate the phenomenon of uncanny unseen presences by magnetically stimulating the right temporal lobe.

If this is true, then old school religion might be something like a byproduct of bicameral “command and control systems”—a thesis that Neil Stephenson plays with mightily in Snowcrash, which surprisingly did not come up in the session. McVeigh argued that Jaynes’ theory explains the universal presence of idols in ancient religions, whose god statues, heavily worked and then ritually awakened, would serve as unconscious props for bicameral hallucinations. The trickery that seems to have gone down in Antiquity, when pagan god statues were outfitted with speaking tubes, might even be seen as a degenerate attempt to revivify earlier perceptions that had declined with the loss of bicamerality.

Jaynes himself insisted that true bicamerality could no longer be found on the earth, that all humans have moved on from this earlier proto-conscious state. But perhaps through the routes that McVeigh and Kuijsten mention—trance, hypnosis, spirit possession, perhaps psychedelics—something of the old tango returns. More speculatively, what might the next turn of the screw look like? Perhaps the emergence of network or integral consciousness, which seems to be where the evolutionary arrow of psyche is pointing, for better or worse, demands another re-organization of the voices in our heads. Maybe all those Bluetooth headsets are just the beginning, the speaking idols of the noosphere. Keep you ears perked.