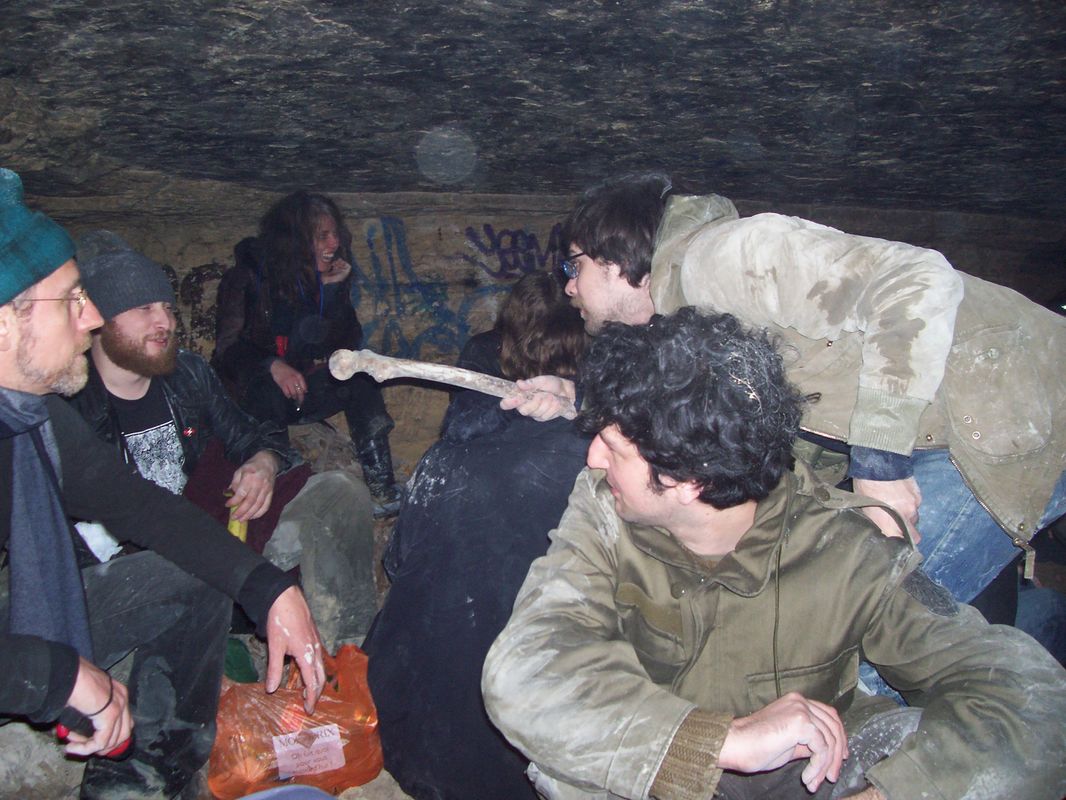 On the eve of flying to France, I asked my pal Layil, who is a refugee from the darkside vampire scenes of New York city and Barcelona, if she knew any night crawlers in Paris who could get me into the catacombs. She said she would ask a cerain Father Sebastian, an old crony who now lives in Paris, but I never heard anything more about it. Tant pis, I thought, never really figuring I’d be able to get into the catacombs anyway.

You can take a tour of the official catacombs of course—the underground ossuary near Place Denfert-Rocherau (Denfert as in D’Enfers as in hell, muthafuckah) that was created when overcrowded cemeteries were moved outside the city limits in the late eighteenth century. Looking for a place to store all those bones, the authorities decided to fill in some of the empty quarries that honeycomb the left bank of the city and that served as the source of its limestone for centuries. I’ve done that tour, and its ironies are rich: the bones of the anonymous dead are stacked to form architectural elements—walls of femurs especially—in precisely those places made empty by the need for architectural elements above.

The catacombs I wanted to explore was the immense labyrinth of mined limestone passageways, galleries, and halls that extend beyond the official ossuary. (Think I am exaggerating about “immense”?) For generations, this shadowy underground city has attracted the unauthorized attentions of decadents, communards, poetes maudits, Nazis, freaks, and punkers, and I’ve been dying to go since I first heard about it. So I felt more than your average thrill when a pal of the Pilkdown Man hooked us up with a crew who were gathering at a metro stop in the 14th arrondisement 10 pm last Saturday night in order to make an illegal foray below.

The night began auspiciously, at least in a poetic sense, as our path to the rendezvous point bisected the Cimitiere de Montparnasse, which is not as atmospheric as Pere Lachaise, but just as full of further denizens of the underground. The group that gathered near the metro included some old school toughs, pretty girls, and longhairs who had been exploring the catacombs for decades, as well as a number of newbies like me. Some of the women were dressed in waders, some in smart looking boots with high heels. After loading our packs with beer, we walked along the Rue Thermopyles, a narrow cobblestone street whose nearly medieval air was somehow amplified by the art-school stencils about time and history emblazoned on its crumbling walls. “Dépasser le passé.” Here we go.

We then met another pod of folks, among whom was a longhaired American wearing an FBI t-shirt who turned out to be none other than the vampire king Father Sebastian, who was much younger than his name suggested. He had moved to Paris in order to throw fang parties and write his memoirs, and I carried his ham sandwich in my backpack as our crew hopped a wall and clamored down the side of a hill towards abandoned railway tracks that led into a large, dark tunnel. We followed the tracks for a spell until reaching a cramped hole that we dutifully slid down, plunging into a maze of clay and mud and brick and water that would swallow us up for the next seven hours.

There are many ways to visit the catacombs. There’s the historical approach, which reads the catacombs as an underground palimpsest of labor, death, and subculture. There’s the romantic angle, and one can imagine packs of erudite Satanists dressed in evening wear holding champagne-fueled ritual fuck soirees in the caverns below. A lot of the catacombs sites online emphasize urban adventuring, and indeed, one of the many crews we ran into that night were outfitted with LED headlamps, jock bonhomie, and a set of “Club Sportif Cheminots Paris” patches they handed out to all takers.

This was not our way. We went gutter punk. During the first leg of our journey—a long, boring, and wet cruise that lay slightly beyond the catacombs proper—we were overtaken by a young solo explorer who mentioned something about a “little surprise” to Father Sebastian as he passed. Shortly thereafter we turned in the direction of Rue Sarrette, one of a number of passages that feature street signs. Five minutes later, the passageway was engulfed with smoke from a small paper fire, shortly followed by a genuine smoke bomb, which reduced visibility to horror movie zero for a good fifteen minutes, during which time we simply soldiered on as our apparent leader, a stocky and good-humored gabba nut named Boris, alternately roared threatening obscenities at the perp and exulted in the amusing twists and turns of what he called “the game.”

Boris was a cool guy. He talked about the history of the tunnels, which he characterized as a “nervous system,” and about the crazy old days before you could download maps from the Internet. He pointed the lacerated telephone lines whose copper wire they used to steal for cash.

Eventually we came to the first of the handful of rooms we would visit that night in order to drink and smoke and eat cake and listen to techno music echo through the eldritch halls from very small iPod speakers. Other voyagers came and drank our whiskey and left. Jokes were made about getting lost. By the time we departed, Boris was stumbling drunk, as were some of the virgins. In the second of such halls, all of which have names that were not passed on to us, Boris spit up and then passed out. I had been drinking as well, but I admired the speed and tenacity with which my anxious social noodle analyzed the still conscious characters in our already splintered group in order to determine the next alpha in line, or at least the next spelunker who had a clue.

Boris’ girlfriend knew her way around—a recent Parisian, she says she knows the catacombs better than she knows the streets above—but she was apparently pissed at her pissed fellow and disappeared along the way. My hopes then settled on a gangly longhair with the friendly knowing smile of a ’70s cosmic freak who once sold books in a stall along the Seine, but spliffs seemed to do him in at one point as well. Not playing leader was clearly part of “the game.” The bespectacled fellow I eventually settled on told me what it used to be like wandering alone down there with a head full of acid. “Then you see the gremlins. The stones talk to you. You see it is really haunted. Now we just get drunk and try to get lost.”

Towards the end of the night, we huddled in a room I subsequently learned was called the Minerological Office. It featured a small stairway leading nowhere whose steps were supposedly formed from the various strata of the neighboring earth. We were out of booze. A mildly delirium settled on me, less from fatigue than from the trance of our hours-long slog, which my brain even now tags as more of a dream memory.

After an eternal wait while various personal issues were worked out and the drunks occasionally were occasionally reeled back in after  wandering off down the halls, we were at it again, plunging like eternal players of some Parisian first-person shooter game through a seemingly endless series of ancient and murky halls lit by a fading 3 Euro flashlight, passageways riddled with holes and nebulous decision points and knee-high ponds of much and the scribbles of a thousand taggers. Finally, we reached a ladder that climbed thirty feet or so up a narrow vertical tunnel to an open manhole not far from where we first set out. Though my pants and backback were already covered with mud, a final ignominy lay in the gobs of murk that dripped on my face and hair from the boots of those escaping to the daylight above, where we stood exhausted for a few moments in the dawn’s ice-cream light before bidding a quick adieu.

I later learned that dozens of impressively painted and sculpted rooms exist, halls with names like Salle des Fleurs, Anubis, and Psyckose; in addition, the opportunities for exploring mining  lore and city infrastructure are legion. But however much I would like to return to the catacombs with proper gear and a more research-oriented focus, I will never forget my sloppy surreal initiation, full of signs and portents, and capped, just before we reached the ladder home, with a slight shamanic shock, as a squeeze through a narrow birth canal of a hole led to a low chamber completely filled with human bones. It was more of a trash heap than an ossuary, and we crouched right on top of it all, this pile of femurs, broken joints, and cracked skullcaps,  at once strange and familiar, our future home.

Though the vibe was pretty nonchalant, I flashed on Tibetan chöd rituals I have read about, and pondered possible sacrilege. I felt the presence of material ghosts. As I picked up the skull fragments near me, or tested the heft of a dusty femur, I could not help imagining the person these bones once encased, their occupation in life, the texture of their character and how their broken bits wound up here, to become part of a mingled heap of refuse or, due to the enthusiasm of our most thoroughly trashed crony, a backpack full of souvenirs. I was tempted to take a bit of remains with me as well, and picked up one broken thigh-bone. I had never really looked closely at broken human bones before, and though I know about bone marrow, I had unconsciously assumed that they were still solid. It was disturbing to find that even our largest bones are fibrous and filled with tunnels, very much like the earth wherein they inevitably lie, passageways inside and out, and all a labyrinth.