Anger, the Stones, and Charlie 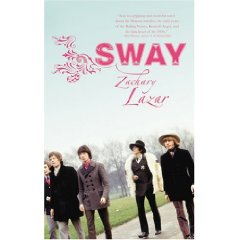 Zachary Lazar is one of those fiction writers you might come across in the New Yorker and—if you are anything like me—rapidly flip by on your way to the critics. As the jacket flap of his recent novel Sway is happy to tell us, the guy graduated from Brown and won a prize at the Iowa Writer’s Workshop, which is one of the main pedagogical engines of contemporary literary fiction. And his prose reflects some distinct Iowa predilections, especially in the detached and well-crafted descriptions that fill this book with highly focused and pregnant slices of time, place, and psychology. In the opening scene, for example, a diminutive freak leads a young man into a SoCal suburban home and demands that he wait there until the owners return, at which point he should tie them up and rob them. You can feel the implacable California afternoon sun, the lame décor, the intricacies of the younger man’s confused desires to please and to flee, and to act more autonomous than he is.

That the young man is Bobby Beausoleil and the older one Charlie Manson is what sets Sway apart from most mainstream contemporary fiction. Lazar boldly goes into a zone of cultural history that has already been surveyed and mapped and squeezed for every last bit of meaning. But he knows that something of that era continues to elude us, especially its darker undertows, and so he interweaves few of the more shadowy strands of the Sixties: Manson and Beausoleil; the career of Kenneth Anger, the occult experimental filmmaker; and the Brian Jones years of the Rolling Stones, culminating six months after Jones’ death at Altamont.

I don’t know my Stones lore well enough to truly judge, but based on the Anger and Manson stuff, Lazar seems to have done his homework. Still, his book is very much a fiction, not a rock bio or a cultural history with dialogue, and that difference makes these well-told tales fascinating and vibrant again. Lazar is particularly good at writing about the Stones without sounding like a rock critic. Though he aptly characterizes the Stones circa ‘69 as “toilet music,” he gets more mileage out of describing Keith’s pinkie as it holds the bright suspended fourth of a D chord, one of the guitarist’s most characteristic moves. Lazar also understands the cagey posturing of these young men as they embrace “the total freedom that was the compensation for giving up their identities.” Probably the most evocative part of the novel follows the Stones on a trip to Morocco, where Anita shifts her affections from Brian to Keith, and Lazar does an admirably understated job of evoking the inevitable exotica acid trip.

Brian and Keith are beautifully and substantially drawn, with the structure of the latter’s face compared at one point to the delicate bones of a monkey skull. But the more shadowy mysteries lie with Mick Jagger and especially with Anger, whose peculiar and opaque motivations are best captured in a remarkable scene—which I believe is apocryphal—where the filmmaker sneaks into Mick’s vacant London flat and paints his door gold. Towards the end of the novel, Anger has a deeply disturbing chat with Jagger, who has vaguely suggested he might fund Anger’s last film, Lucifer Rising. The verbal mind-fuck these two wizards indulge in gives us the clearest glimpse of the dark heart of Lazar’s tale, one that readers of Gary Lachman’s ascerbic Sixties history Turn Off Your Mind will recognize: the creepy nihilism at the heart of all that erotic and mystic psychedelia.

I have to admit that I closed this satisfying novel with the sense that Lazar neither understood nor evoked the mystic dimension of the era’s sympathy for the devil—indeed, an occult tome called The Sephirot, which appears throughout the novel and that Lazar admits to inventing, is perhaps Sway’s least persuasive element. Still, you only need to so much esoterica to recognize the uncanny patterns of this tale, patterns that are perhaps best congealed in the Baron Samedi top hat that Jagger wore at Altamont, a fashion item he picked up from Anger, who picked it up from Bobby Beausoleil, who had killed Gary Hinman just six months before. Hinman’s murder is the most gruesome scene in Sway, but its supreme horror doesn’t lie in the careful details Lazar provides about the torture, including the slices reportedly delivered by Manson. The true horror is the confused and “go with the flow” amorality that pervades the scene, and, by extension, the era.