The Shroud versus the Code 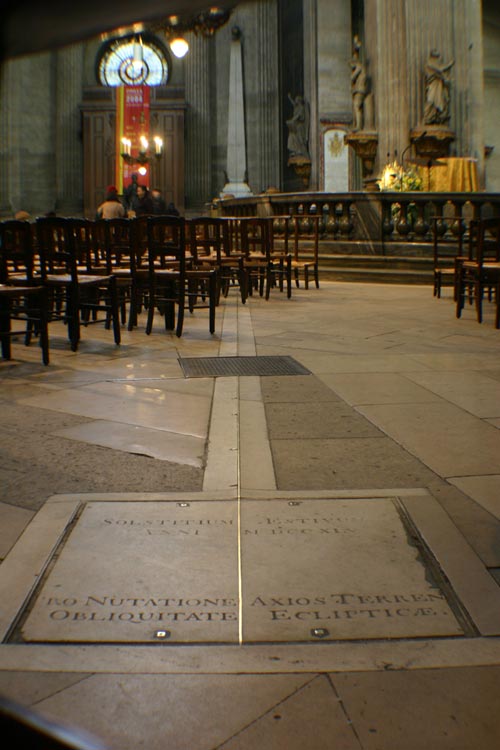 When I am in Europe I love visiting churches. They are portals into a resplendent and disturbing imagination, their architecture is fascinating and constantly varying, and, best of all in times like ours, they are almost always free. I visited a lot of churches in my brief stay in Paris—including La Trinité, where the great Messiaen was organist for over sixty years, and Saint-Germain-des-Prés, an atmospheric and often profound mélange of Romanesque, Early Gothic, and old school Merovingian stuff that features a Giacometti-like limestone sculpture of a Frankish king and, near the crypt of René Descartes, some almost pastoral medieval glasswork.

The massive Église Saint-Sulpice lies not far from Saint-Germain, and it has few of its charms. For one thing, its north tower is presently being restored—some Parisians think the work will last forever—and the western portal is surrounded by fences, trailers, and the rhetoric of public works. The church’s interior is massive and cold, Catholic with a capital C. The building manages to be both imposing and retrenched at the same time, without the organic spring of the medieval Gothic or the 3D mania of the Baroque. It is unredeemed by the presence of a few Delecroix panels, and one quietly exults in the fact that the Marquis de Sade was baptized here.

Over the last few years, Sulpice has become one of the more popular churches in Paris, due to the presence of a curiosity known as a gnomon. In the middle of the floor of the south transept is a stone panel surrounded by a brass line that extends at an odd angle across the floor of the transept along the edge of the chancel. In the northeastern corner of the transept, the brass line connects to the base of tall, narrow, bone-white obelisk, that stands there looking sheepish and pagan. This brass meridian line was so arranged that, in the old days, or rather on the equinoxes of the old days, a lens in the south transept window would focus the beams of the sun on a brass marker before the altar. A quarter a turn of the year away, the winter sun would in turn illuminate a point marked midway up the obelisk.

On its own, this gnomon is a curiosity worth of the era of the 18th century in which it was constructed—not simply an idol of reason but of royal France’s bid to be the omphalos of time in a global world. But thanks to the medium of pulp fiction, this Enlightenment device has developed a more arcane charisma that has been drawing the tourists like a tractor beam. In his 2003 esoteric megahit The Da Vinci Code, Dan Brown makes prominent mention of the Sulpice gnomon, where it signifies some secret Templar wristwatch or the fluctuating length of the hemline of the goddess or the “Rose line” or something like that. I can’t quite remember, even though I ploughed through Brown’s book on a transatlantic flight, and because I will never touch that thing again you will have to look it up yourself.

The overlords of St Sulpice, though, are following the Da Vinci Code phenomenon very closely, and they don’t like it (they refused to let Ron Howard film his adaptation in the church). Along the wall beside the obelisk are a set of posters and handbills, some of which explain the astronomical calculations of the device, which, by extension, has nothing to do with any sort of heretical mysteries scuttling around beneath the skirts of the church. 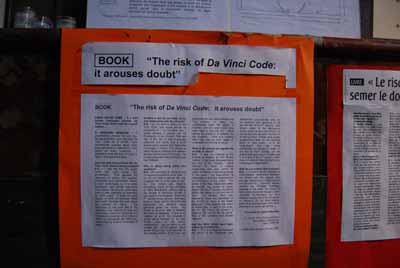 Sulpice, we are informed, was not built on a pagan temple (they don’t mention that Notre Dame was). There is no “Rose Line,” and the initials P and S that appear on some small round windows in the transept do not stand for the Priory of Sion, an important theme in the esoterica that Brown drew from in his novel. And just in case you were open to such scuttling credulities—which perhaps explains why you had trundled into the north transept of St. Sulpice in the first place—then you should also be aware that the Da Vinci Code is a pack of scurrulous fibs that are not only specious and speculative but erode true Christian faith. If you came looking for a genuine occult mystery, in other words, please look elsewhere.

But you don’t have to look far. Just a hundred yards west of the obelisk lies a side chapel devoted to reproductions of a photographic image that, if you grew up watching In Search Of like I did, you will instantly recognize: the Shroud of Turin. As the signs in front of the cordoned-off glass case explain—there is something about modern mysteries that demands wall texts it seems—the spookily stencilled face, which looks like the Zig Zag rolling papers guy but is widely believed to be Jesus, become evident when photographs were taken of the shroud in 1898. Its not clear why these deeply controversial images are in St. Sulpice, but the irony is outstanding. To wit:

In one chapel you have the sentimentally irrational celebration of scientific device—the photograph—that reveals an occult truth, while a few bays down you find a scientific disenchantment of the occult truth supposedly signified by a calculating device.

As readers of occult potboilers like The Da Vinci Code or Holy Blood, Holy Grail know, there is always a key to these enigmas, and it usually hides in plain site, requiring only the right exegete to arrive. Many such decodings of the interior of St Sulpice church have been made, especially in the Dossiers Secrets most likely forged by Pierre Plantard. Luckily I was visiting Sulpice with the more discerning Piltdown Man, who pointed out that the monogram inlaid on the raised floor of the Turin shroud chapel spelled out “SFX.” As in: Special Effects. Even the most religious masters of mystery, it seems, know how to work the curious and sometimes credulous bond between supernatural perceptions and calculating devices. 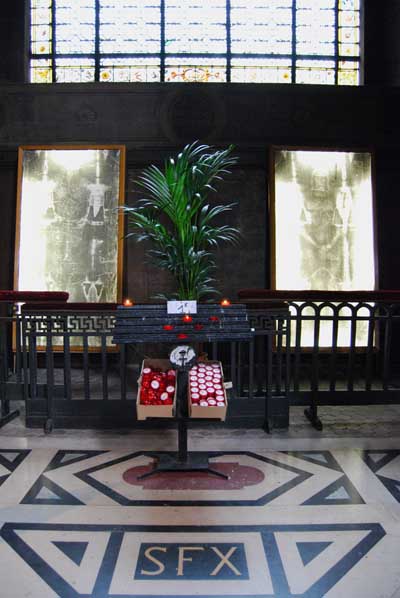