Erik Davis
Moving Pictures
• 11 years ago
publish
Check it out 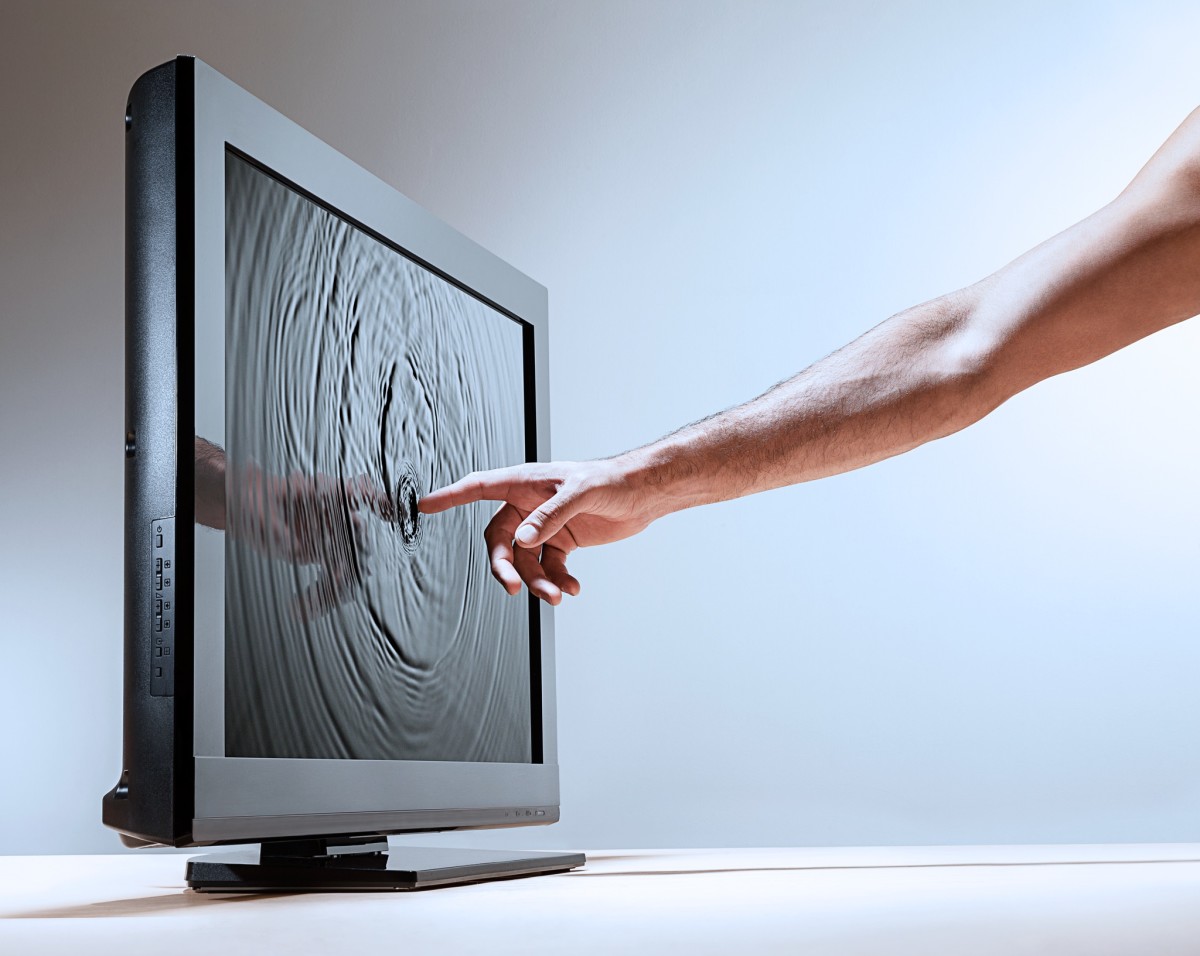 The following is the second installment of The Analog Life, a column  for Arthur magazine.  PDFs of the entire new and cool issue are available from the link above.

Last month I ditched my old 17-inch Sanyo TV and bought a big flat acronym—a Samsung LNT2653H LCD HDTV to be precise. My main motivation was visual hedonism. Though I don’t watch a ton of movies, I am something of a cineaste, having gone to college in the days when a decent sized campus like ours might boast a dozen film societies. Until recently, I fed my Janus jones in repertory cinemas, while at home I watched lighter fare—B movies or anime or leeched HBO shows. But rep cinemas are dying, even in a deeply mediated town like San Francisco, and I am simply not willing to squint any longer at letter boxed DVDs. I wanted a screen with an aspect ratio, if not a size, worthy of The Man From Laramie or Kagemusha. And so I entered the cacophonous purgatory of Best Buy to check out the wares.

I’ve always found TV shops kind of disturbing. It’s something about having all the machines simultaneously replicating the same program, like a flickering clone farm. But what really spooked me out this time was an immense split screen that was designed to demonstrate some Samsung feature called Auto Motion Plus 120Hz. On deck was the last Pirates of the Caribbean movie, a product that will also get you thinking about clones. On the right, you had the “normal” image, which looked like a somewhat tinny and pointilistic film—HDTV’s reasonable digital echo of the silver screen. But the Auto Motion Plussed image on the left was so lifelike and three-dimensional that it destroyed any sense of film at all. It was as if the screen was no longer an enchanted mirror, but a telepresence window onto a Hollywood sound stage where an overpaid babe in a costume was stumbling around with some dumb props hoping the CG guys would make it all make sense.

In his much-reproduced essay “The Work of Art in the Age of Mechanical Reproduction,” written in 1936, Walter Benjamin saw cinema as the paradigm of a new kind of technological media that would undermine the traditional “aura” of art, the semi-sacred quality of being that once infused individual works of creative genius. Looking at Keira Knightly’s makeup flake into the empty air of Auto Motion Plus, it was suddenly clear to me that we still have some aura left to lose: the analog aura of film itself, an aura that has a great deal to do with the complex chemical processes which give certain film stocks and eras an unmistakable timbre. This is the sunset of cinema, folks, a blazing analog dusk, and it is giving way to a digital night that is full of data and noise and still can’t really get the blacks right.

Then all the screens around me started throwing footballs in unison, and it started to make sense. The future screen, the future TV, is not about cinema but about simulating presence, a carnal ultrafidelity that’s good for sports, and reality TV, and porn. I must have had low blood sugar or something—box stores do this to me—but a vague apocalyptic dread descended upon me, as I imagined these home theaters invading millions of homes and literally sucking the life out of them, like phantasmic vampires, or digitally remastered portraits of Dorian Grey. Screens that grow more lifelike in exact proportion to the ontological exhaustion of the world outside, a world flattened and set groaning under the weight of us, our distractions, our hunger for figments. A verse from the book of Ezekiel welled up from the depths: “Son of man, hast thou seen what the ancients of the house of Israel do in the dark, every man in the chambers of his imagery? for they say, the Lord seeth us not; the Lord hath forsaken the earth.”

That said, as long as we are stuck in our chambers we might as well get some good imagery on the wall, which is why I shook myself out of my apocalyptic fugue and continued to shop. But what to buy? If I were a rich guy with a big house I’d definitely buy one of the big LCD HDTVS with Auto Motion Plus (for the…sports). But I share a small apartment with a lovely lady who doesn’t really watch or want a television at all, and who certainly does not want one lording over our wood-paneled living room with all the warmth and grace of an MRI machine. So I bought a 26-inch LCD with good stereo sound to keep in the office. That night I emailed the Pilkdown Man in London, and mentioned the TV’s “unfortunately small” size. “Wow,” he wrote back, “we’ve entered a world where a 26″ telly is small.” I felt like an idiot.

We are not a cable household, which means that when we watch TV, we watch it the old fashioned way: by sucking analog signals from the sky with a cheap V-shaped antenna stuck on top of the set. Though this method may strike you as Paleolithic, old school aerials are still the signal suckage method of choice for roughly 20 million American households. These include folks who can’t be bothered, people who can’t afford cable or satellite, and cranks like us who don’t want all that shit lurking just one remote away, ready to strike. Whoever we are, a great sword of Damocles now hangs in the airwaves over our heads, or rather, over our sets. Because as of February 17, 2009, the FCC has proclaimed that the entire analog broadcasting system, known as NTSC, will be permanently retired to make way for all-digital television. Without digital tuners, our old analog TVs are nothing more than monitors.

The United States is by no means paving the way here. Some European countries have already left analog behind, and pretty much everybody is signed up to make the switchover. The main reason for the change, of course, is money: manufacturers get to sell new-fangled sets, TV stations have the possibility of creating a number of new revenue streams, and the government gets to auction those tasty, wall-penetrating frequencies previously occupied by NTSC. One of the first things the government will do with that cash is to turn some of it over to local artists, pirate radio crews, and media activists who are being empowered to create innovative noncommercial programming and micobroadcast it over the freed-up channels—which after all are a public resource, like the national parks—to help prepare local communities for the imminent collapse of postmodern America.

JUST KIDDING! Actually, some of that auction money—up to a billion and a half dollars—will be used to cover the cost of a conversion program that will allow owners of analog TVs to continue to use their rigs. If you want to, your household can call up the National Telecommunications and Information Administration (Orwell anyone?) and demand up to two $40 coupons for digital-to-analog converter boxes to extend the life of your tube. Of course, the government stands to earn much more from auctioning off the spectrum, and their pals will do quite well selling the converters, so don’t feel like we’ve gone socialist or anything.

For the rest of us, broadcasters are promising a new magical world of digital television, because, after all, digital is “better.” Because my Samsung picks up both NTSC and digital signals, I can tell you that the quality of a strong digital transmission is definitely richer. But as usual, digital is not a standard but a sword that can be wielded with widely varying degrees of finesse. In order to make more money, broadcasters can choose to compress their digital channels in order to pack more services into the available bandwidth—including, possibly, other stations that would be sent over the same digital channel. The more you compress, the more lame artifacts are destined to spooge up your screen. If you already use the Internet to liberate movies and TV shows from the evil grip of copyright holders, you will know what I mean: the splotchy walls, the stuttered time-slips, the eruptions of Cubist ectoplasm.

The spiritual difference between digital and analog, it seems, is clearest where the signal decays. A weak analog signal is often bathed in snow, and its fuzzy “ghosts” can not only be tolerable and even charming, but can still be reasonably enjoyed way out in the boonies. Millions of earthlings have had ecstatic TV experiences watching World Cup matches on 13 inch TVs with crap reception. The relative smoothness of analog noise makes it simply easier for the mechanism to receive signals and for our eyes to make sense out of faces in the clouds. Ghosts like it, because ghosts like organic things. Digital signals, on the other hand, decay with neither grace nor charm. Instead, as the signal weakens, it swiftly passes over what is known as the “digital cliff”: a sharp, jarring plunge into jagged visual noise followed by zippo.

Cathode ray tubes are strange devices: evacuated glass teardrops outfitted with what amounts to a ray gun, blasting electrons at an array of glowing phosphors that, in color TVs anyway, look like psychedelic Op-Art. Sending phantasms invisibly through the air to dance across the surface of these crystal balls has always been a somewhat necromantic act. But if we are going to talk of analog ghosts, we need to talk of analog corpses: the millions of old school TVs that are now being sacrificed to the landfill lords of forced obsolescence. Plenty of people will get their hands on converters, of course, but plenty more will just toss out their CRTs and dive, like me, ever deeper into the digital wave. The guy who runs Electronic Recyclers, one of the largest e-waste recyclers in America, thinks that roughly 80 million analog sets will get tossed out over the next year or two. According to a back-of-the-envelope calculation, that’s just under a million and a half tons of TV—a mass that surpasses the weight of the Twin Towers. And that’s not to mention the amount of lead oxide in the glass. Let’s just say I hope outfits like Electronic Recycler are ready to get their hands dirty.

I just left my Sanyo on the street one night and it was gone by morning. In San Francisco, the street still giveth and taketh away. But a relic of the boob tube remains. Because we don’t have cable, we still need to use an antenna to pick up the terrestrial digital broadcast signals. So there sits my home theater: a sleek, if modestly-sized Samsung LNT2653H, looking like the monolith from 2001 laid on its side, topped by a pair of bent aluminum rabbit ears, duct-taped to the back of the set, flashing its peace sign at the principalities of the air.