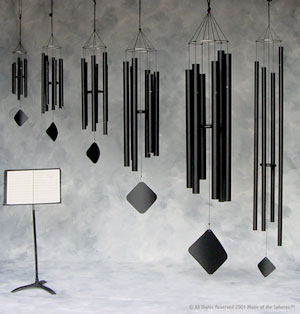 I love wind, the gusts that make moaning music from the pines in the mountains, or the zephyrs that blow in from the Pacific over my toy city, thrusting fog and briny mists eastward towards the bay, and tunneling up my street on their climb toward Twin Peaks. I am also down with the music of metal, the resilient blast of archangelic trumps and gluttonous tubas, not to mention the shimmering arpeggios of vibes and hammered dulcimers and the clarion call of the carillon. And I am fascinated by randomness and chance, from I Ching coin tosses to the Situationist derive to the music or paramusic of John Cage. And I love, very much, every single song that Brian Wilson wrote for Smile. All this is true, and yet the fact remains:

I particularly hate the fucking wind chimes that, until recently, hung next door. A veritable church organ of silvery cylinders, the batch hung there like a flayed trout and goaded me for the last couple years like some demon fork in a Bosch painting. I am a light sleeper, an on-again, off-again insomniac, and one of my keys to sleep is to let in some night air, a remedy that can only be effected in my apartment by opening the window that looms over the neighboring backyard, whose lovely but illtended flora was ruled, you might say, by that dangling instrument of sonic miasma.

Whenever the fogs and breezes sucked and blew through my hood, the chimes rang and jangled, tittered and dribbled and spat. They carved into my ears an eternal archetype of idiocy, of talking loud and saying nothing. The designers of this particular device opted for some flat sevenths, and sometimes the aleatory forces zeroed in on that interval, fluctuating between the blue note and the tonic like the most naïve of jazz soloists. I wanted to cry. But mostly I just tossed about in the insomniac’s 3am hell of death and taxes.

I did not know the owner of the house, though I spoke to some of the tenants, who stared at me with mute incomprehension, as if they had no ears, or like they knew something terrible about the owners that they wanted to spare me. Besides, I am at times a fatalist, particularly when it comes to suffering. Most of the solutions I seriously imagined involved black ski masks, ladders, blankets, and wire cutters, as the device, which much have weighed as much as a small child, hung far from the ground, beneath the second floor landing. Occasionally I would sneak through the gate we share with the neighbors, just to stare at the thing, my white whale.

Sometimes when it woke me up I would go Zen and try to just embrace the sounds, as I often do with “difficult” music, like Schnittke or Lutoslawski or the Hearts Greatest Hits album my partner plays while cleaning. But alas. These random clangs afforded me no escape into detached music appreciation, no matter how I listened. They were proof that, even if one in a million typewriter-wielding monkeys will eventually produce Hamlet, the person who is capable of recognizing the marvel will kill themselves or all the monkeys long before said simian taps out

‘Tis a fault to Heaven,
A fault against the dead, a fault to nature,
To reason most absurd.

But there’s the rub. Like a cute puppy who accidentally knocks over your Waterford crystal, the chipper, childish aimlessness of wind chimes makes them tough to truly hate. I also found it difficult to hate the person who hung the chimes in the first place, because, in principle, it’s a charming or at least innocuous acta suburban echo of the Aeolian harp, a bid for a vaguely pagan sound design, a step in the right direction. It was like getting angry at the brick you stub your toe on.

Then, finally, respite came. We heard from our kindly landlord that the owner of the property had died, and a few days later the wind chimes disappeared. For days, and especially nights, I was in that peculiarly empty bliss that is composed of the absence of pain rather than the presence of some pleasure.

But it is summer in San Francisco, and has been particularly windy of late, and a few nights ago I heard the dreaded melodic doodling again. My grief was so complete, my despair so thorough, and my language so foul, that my spouse took matters into her own handsliterally. She dressed in black and left our flat with stool, broomstick, and knife in hand. She returned in a moment, insisting that the wind chimes were still gone. Was I hearing phantom chimes? Was my torture virtual, and therefore perennial, like some guy in a Poe story?

The dawn light showed the sad reality: another set of wind chimes, in another backyard, beyond all hope of stealth attack, blithely shimmying in the morning breeze, just tinkling away, like a naked toddler all over the living room floor.