Spectres in Love and Magic 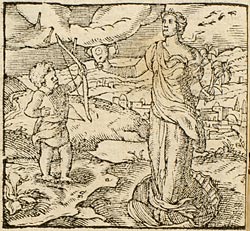 , the nerdishly titled study of “word and phantasm in western culture” that I just finished, is one of the tastiest and most nourishing books of scholarly cultural criticism I have read since Morris Berman’s study of nomadic spirituality, Wandering God

. Stanzas is the first book by Giorgio Agamben, who is now one of Europe’s most famous philosophers. I dig him too, although some of my reasons are more hedonistic than rigorous. For one thing, Agabmen writes beautifully, in a compact, literary style rich with allusions and echoes from art and literature. Taking its cue from Benjamin, Agamben’s thought is not systematic but essayistic. His writings possess an almost aphoristic economy, which, though they can grow precious at times, are way more pleasant to read than the jargon machines that battered my brain when I studied “theory” in college. This economy also means that his books and chapters are often rather short, which makes the whole “reading contemporary European philosophy” thing more like an afternoon tea than like recongifuring your intellectual router.

To judge from the Wikipedia entry, Agamben is perhaps best known for his concept of the “state of exception.” The basic idea here is that extraordinary circumstances (like really big buildings collapsing) function as a kind of wild card in the deck of the modern constitutional state, a “state of exception” that allows the state to abrogate the very laws and procedures that constitutes its legitimacy. Marital law is a general examples; the savaging of civil liberties and due process under the Bush administration is a specific one. Let us pray those two examples do not have any reason to further cross-breed.

Stanzas, which was first published thirty years ago, is a very different kettle of philosophical fish. Like Iaon Couliano’s equally remarkable Eros and Magic in the Renaissance

Here’s a way into this arcane notion. Recall the basic twofold division of the human being we inherited from Descartesan internal realm of mind (res cogitans), and a realm of spatial materiality (res extensa). Then imagine a liminal zone between these two, a psychological crossroads, a relay network of images. Deriving from both Neoplatonic and Aristotelian sources, this third realm is the realm of soul or pneuma, a realm inhabited by phantasms that mediate between the corporeal world and the spiritual world of pure intelligences, whether conceived as platonic ideas or archangels. It comes down to us as the imagination, but an imagination much mightier than our contemporary sense of the term. For the medievals, the mindstuff we write off as “fantasy” or “mere imagination” was an animated and necessary dimension of conciousnessat once a place and a phenomenology that linked together body and spirit, earth and the heavens. Not to mention the hellsfor in some accounts, it is our phantasmic body that undergoes the trials of the afterlife.

Philosophy is always also physiology. The basic pneumatology circuitwhich Couliano also covers wellis that the images of corporeal objects enter our eyes and become phantasms that circulate within a complex schema of spirits and mirrors that link brain, heart, eye, and more psychological elements like memory and judgment. The animating energy of this circulation is desire. For Plato, Agamben writes, “desire and pleasure are impossible without this ‘painting in the soul.'” When we desire, we desire the phantasm, and purely corporeal pleasure does not exist.

Taking a more critical tack, Agamben connects this esoteric paradigm to two of the more hallucinotory modes of contemporary fetishism: sexual “perversion” and commodity fetishism, both of which play off the division between objects and the phantasms that both render these objects both present and inaccessible. But for most of the book, Agamben focuses on recovering the ferocious medieval understanding (and experience) of the Imagination. “Not even in the most exalted Romantic theorizing has the imagination been conceived in so elevated and, at the same time, concrete a fashion as the thought of this period, which surely more than ours deserves the name of ‘civilization of the image.'” This is why iconoclasm and idolatry were such crucial topics. Moreover, idolatry was not aimed against the worship of material fetishes but against images themselves, what we might call “virtual” ones. The connection between these sorts of phantastic religious images and the role that creative imagination and images play in Tibetan tantra, not to mention shamanism, also makes it clear that, though Agamben is a proud Eurocentrist, the tradition he exposes has deep transcultural implications.

Pneumatology, with its demons and heroes and angels, declines in the face of medieval scholasticism, not to mention the later rise of rationalism. Phantasy does not disappear, however, but is chased into the esoteric shadows, into occult and hermetic practices, as well as the Gothic culture of the uncanny. By making an explicit link between pneumatology and the figures in fictions by Poe, Hoffman, and Kafka, Agamben cracks open a Pandora’s box of imaginal implications that he does not, unfortunately, do much with. But I swear that after reading Stanzas, you will never think about Second Life or the uncanny valley the same way again.

As it hunkered down int the shadows of modern consciousness, pneumatology did leave a psychological legacy that marks (nearly) all of us: the phenomenon of romantic love. Agamben shows how the ideas of love that inform Italian love poets, Dante, and the tradition of courtly loveand which retain substantial force todayderives from a phantastic spiritualization of desire. Though originally seen as the playstuff of demons, the phantasm is increasingly valorized by medieval thinkers as a positive transformative power. Just as the phantasm mediates between body and mind, it also mediates between the higher spiritual realms and the self. This is the origin of visionary experience, angels as well as nasty spectres. As such, the almost demonic quality of obsessive erosyou remember, obsessive thoughts, sighing, that magical sense of the other’s image, etc.is transformed into a kind of quasi-embodied spiritual redemption. So Dante is led into paradise by the vision of Beatrice, a phantasm he first encountered in the body of a nine-year-old girl. (He was a kid too.) The “aerial demons” of Neoplatonic magic become cherubs. Even today, love becomes a kind of phantastic spell, sometimes against our will, and sometimes as well with all the will we can muster.

“It is to the fact that the highest moral ideal is indivisible from a ‘low’ and phantasmatic experience, that we likely owe the ambiguous character of every modern Western conception of happiness,” writes Agamben. “At least from the 12th century onward, the idea of happiness [appears] intertwined with the notion of the restoration of the ‘sweet play’ of Edenic innocencethat happiness should be, in other words, inseparable from the project of a redemption and a fulfillment of the corporeal Eros.” Pneumatology helps explain the fact that falling in love is often the most magical (in the poetic and even occult sense) time in many modern people’s livesand also why the heart can become so difficult once the phantoms dissolve. (It also suggests some remedies, but that is another story.) Though the phantasm is ultimately an interior entity, connected with the higher realms as well as the physical one, Agamben sees this Edenic project at work in our modern sex lives. “Although remote from its originary impulse, the lucid poetic project of love as fulfillment and restoration of Edenic innocence still survives unconsciously in the contemporary aspiration to a liberation of sexuality as a condition of happiness.”

In the age of the brainand the reductionist rhetoric of the New Atheismit is tough to look at the psycho-physiology of pneumatology as anything more than metaphor. But that’s the point. Metaphor is more than metaphor. Our metaphors and images are alive, they manipulate and magnify us. They are often as real as the objects they cloak and carry with them into the slipstream of the imaginationa realm moderns have discounted far too long as a basement of unreality where only kids and SciFi writers are allowed to play. It may turn out, however, that we live in a world of phantasms as much as a world of things. As poets and medicine workers and fetishists know, even things are more spectral than they first appear.