Now I don’t want to sound like some misty-eyed American ready to pull up stakes and move to Tuscany and refurbish a villa with my bare hands and write a best-seller about gorging myself on pasta and squabbling with irritating but lovable Italian bureaucrats. But I loved my time in Italy a couple weeks ago. The place definitely passed the Circus Test, which is the basic measure of whether a circus is good: after the show is over, you want to chuck your life and run away with the circus. Whether you do it or not is not the point—it’s the desire that counts. And after a week in Rome and environs, I wanted to move to Rome, if only for a time.

I had a good time partly because I didn’t try too hard to have a good time, at least in the desperate tourist sense of trying to pack everything in, see all the sights, and run around like a voracious, all-consuming, idiot eye. I took things in at a manageable pace, and still managed to see most of things that I was dying to see, though the Capuchin boneyard was closed and the hour too late to enjoy Pozzo’s trompe-l’oeil rocket-ride on the nave ceiling of San Ignazio.

But I did manage to visit the late Renaissance gardens of Villa D’Este and Sacro Bosco. I was staying with my pal Antonio, a media theorist and educator who has recently shacked up with a lovely Italian art historian. They have a nice apartment near the Villa Borgia, and they also had a car, which meant it didn’t take too much effort on my part to get my ass out to the environs of Rome.

I am totally fascinated with the mythomaniac fantasia that characterizes some of the villa gardens that surround Rome, and that I first read about in Joscelyn Godwin’s great The Pagan Dream of the Renaissance. Renaissance Neopaganism was expressed everywhere, from frescoes to philosophy, but the garden, with its grottoes, statues, and greenery, not to mention its metamorphic implications, holds pride of place. (Or maybe I just feel that way because of my frequent and glorious incubation as a lad in the pop-cult grotto that is Disneyland’s Pirates of the Caribbean.) The Neopagan impulse in the Renaissance is particularly delicious because of the fundamental ambiguity about its sacred or esoteric dimension: was the revival of the pagan gods merely the decorative icing on the Classical cake that characterized Humanist and Renaissance trends in Italy? Or was it something more, some nascent polytheism lurking behind the frescoes and the poesy? And what would such polytheism actually mean?

Villa D’Este belonged to a colorful cardinal and Borgia named Ippolito il D’Este, who strongly influenced the design of the villa’s gardens. From the moment you pass down the stairs into the steeply terraced spot, you walk into a coy wonderland that anachronism and partial decay only improves. It is no English garden, but an ordered place, a zone of clear interaction between the cheery rationality of the Renaissance and the organic potency of nature, or nature re-imagined along poetic lines.

Though an earthly place, the dominant element of the place is water, principally diverted from the River Anio. Ancient Roman hydraulic techniques were reconstructed to run to the garden’s intricate networks of fountains, waterfalls, pools, terraced waterways, and spitting monkey heads. All these spurts and flows lubricate the soul, as you slip beyond the ordered plan of the garden’s walkways and hedges, lending the place the surreal, dreamlike quality Kenneth Anger captured in Eaux D’Artifice, the wet and glinting short film he shot here in the 1950s. 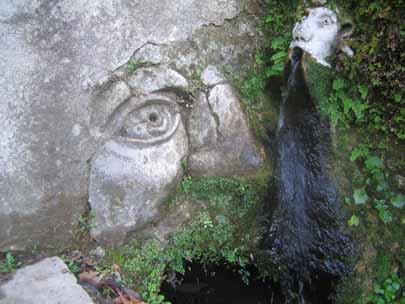 Here water, a natural element, forms the raw material for poetic transformation. This alchemical notion was literally manifested in the 16th century in the high-tech “automatic” water organ that thrilled late-sixteenth century guests to madrigals and other sound effects, created with no human hand. The organ has been largely reconstructed, though its hourly performances were, to this cyborg anyway, less compelling than the glorious Orphic façade of the fountain itself, which originally housed a statue of a lithe Dame Nature. 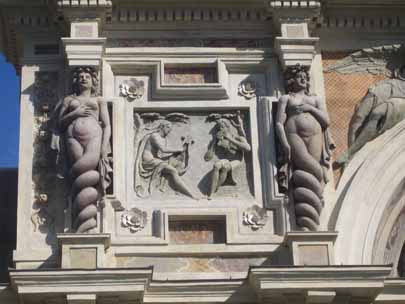 In the 17th century, this fetching earthy lass was moved to a less noticeable alcove to comply with Counter-Reformation trends against overt paganism. But the signs of the goddess are still everywhere about this place. Most obvious is the multi-boobed Diana of Ephesus who rules over a small fountain on the far side of the garden, her dozen pendulant breasts each spitting water in a glorious effusion of Neopagan prego-porn.

The entity who really caught my eye was this heavily eroded and mossy sea nymph peeking out of an alcove in the curved colonnade that surrounds the optically mesmerizing fountain, which seems to form a solid wall of water. In her glance I caught a glimpse of the animate otherness that can occasionally emerge from crumbled statues and organic simulacra like weathered sandstone and cumulous clouds: that sense that some specific spirit stares back. 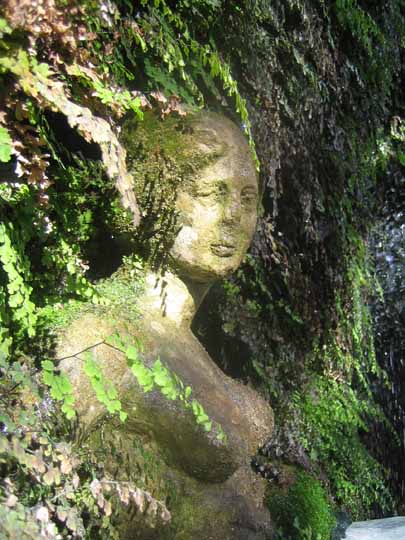 Vastly weirder than the Villa D’Este is the Bosco Sacro, a farther enclave known locally as the Parco dei Mostri, which means Monster Park (an amusing echo for a San Franciscan like me). Compared to the Villa D’Este’s classy integration of mind, soul, and senses, this “sacred wood” provides a lurid and madcap mystery, a cross between a Classics comic book and one of those “Houses of Mystery” that pepper the northern California forests. Created by Pier Francesco Orsini, called Vicino, in the late 16th century, the park is what Godwin calls the “black sheep of the family of Italian gardens.”

Avoiding any large geometric designs, hedges, or civilized gathering spots, the park scatters its now eroded wonders willy-nilly along the convoluted hills and dales that abut a stream: huge turtles and hungry whales, serpent ladies and a giant Pan, a house canted at a goofy Batman angle, and an enormous ogre face whose interior includes a stone table that made me want to party intensely, then and there. Monster Park was definitely a place for soul wandering. 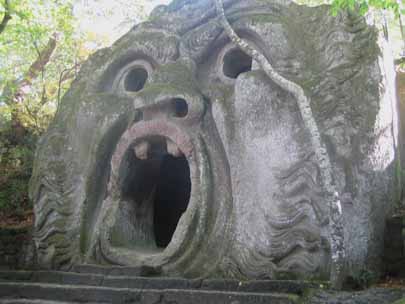 In his book, Godwin invokes the inevitable conspiracy theory: that Bosco Sacro and other gardens represent a secret society of Neopagan rich guys in conscious revolt against the church. Godwin is about as hermetic as you get and still hold down an academic job, but he argues that any attempt to squeeze deep meaning out of the monsters, esoteric, alchemical or otherwise, is doomed from the get-go. Mottos are everywhere, and they often contradict: “Eat, Drink, and Be Merry; After Death, No Pleasure” on the one hand; “Spurn the earth; after death, true pleasure,” on the other. The ambiguity here is fundamental, like those afore-mentioned clouds and sandstone outcrops. For Godwin, the lure of the Renaissance mysteries is more a matter of an “imaginal paganism” that registers an aesthetic or subconscious revolt against Catholicism, but nothing more concrete. Or less. 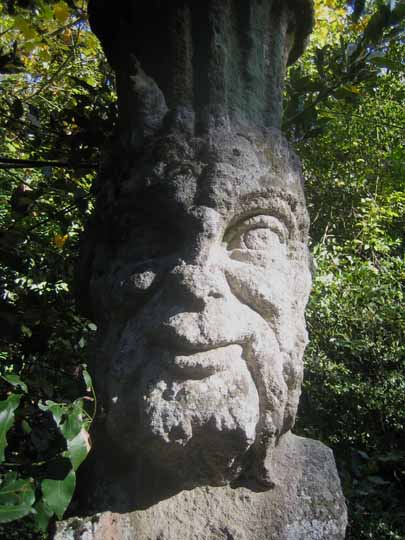